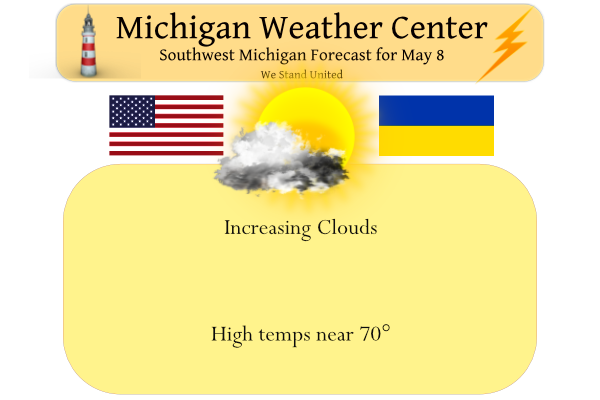 This week will be a boring one weatherwise with the next chance for rain coming next weekend.

Happy Mother’s Day to all the moms!

Gorgeous day in GR for the wedding yesterday. The reception was at The Bissell Tree House at John Ball Zoo. I had not been there before. It provides a great view of downtown GR. We had a wonderful time.

Happy Mother’s Day to all those who are moms, fill the roll of mom or play an important roll in the lives of kiddos!! Thank you!!!
What a Beautiful Day!!!

Wow NWS talking about 5 straight days in the low to mid 80’s in early May and possible record temps! And yet some on here still don’t call that a blowtorch. Too funny!

Happy Mothers Day. Grand Rapids official H/L yesterday was 65/43. There was 100% of sunshine for a change. That was a departure of -2 for the day and should be the last below average day for a while. The overnight low at GRR was 36 the overnight low here in MBY was 38. At the current time it is clear and 55 here at my house. For the 1st week of May it has been cloudy, cool and rather wet. That looks to change in the next week. We are still behind in the spring growth department but that also… Read more »

Boring weather = FANTASTIC! A warm, dry, sunny week sounds incredible! Get outside people and enjoy the near perfect weather! Wow!