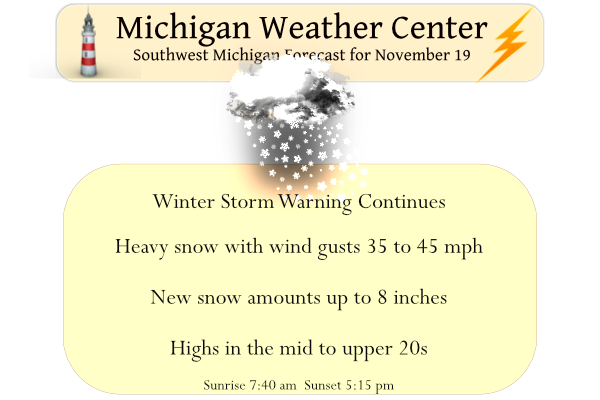 When I started doing some research for todays post it was going to be the average dates of first measurable snow falls well Grand Rapids has already had the one inch, three inch and five inch falls all in the last two days.

New daily snow fall records have already been set at Buffalo and Grand Rapids. With the 5 PM weather reports Buffalo set a new record for November 19th with 16.1” of snow fall. They now have had a total this November of 31.5” of snow fall and now have 24” on the ground at the airport. At Grand Rapids the new record here for the date is 7.4” So far this November 26.0” of snow has fallen. And there is now 10”on the ground as these are the 5PM reports both locations could see more snow today yet. Here in… Read more »

I mentioned earlier how much less snow there is this way and towards the lake which is rather odd with lake effect. Do you have any other reported totals from this area, like Holland, Grand Haven, or anywhere else nearby?

It looks like my 90 inch seasonal snowfall prediction is right on track! Keep it coming!

Over 20 inches of snow out in my hood naild it on this storm lots of records being broke and we are above average snowfall going into December who knew?? Stay safe out on the roads …INDY

Yes and I am approaching 20 inches! What a storm!

Been a different lake effect event for the lakeshore areas. Around Holland and Zeeland we only have 3 or 4 inches on the ground while most of the snow seems to have blow inland skipping over a good chunk of Ottawa county. We’ve had longer periods when it’s not snowing than when it is snowing. Actually been off and on sun most of the day here as can be seen on the Holland web cams.

Our Christmas Tree lighting and parade for this evening were cancelled.

The only lightning I’m seeing is way up near Sudbury. Just began snowing here for the 1st time today. Some sunshine earlier. Wind is bitterly cold. Roads are clear. Not much snow in our yard, as the wind has cleared off large sections of our property.

There are several 70+” snowfall reports in western NY. That’s an insane amount of snow.

We are getting absolutely pummeled with snow as we speak! It looks like one inch per hour snowfall rates! Wow just wow!

Here are some snow depth amounts from major reporting stations around the Great Lakes area at 7 AM November 19, 2022. Buffalo 11”. Grand Rapids 8” Marquette 6”. Lansing, Alpena, Duluth, Erie PA, and Rhinelander 5”. Flint, Madison WI 2” Green Bay and Rochester NY 1” Detroit and Sault Ste Marie trace. Chicago and Rockford IL 0. Remember this is at the locations airport and for the most part are the official amounts for that location. I have been getting on and off heavy snow showers here for the past 2 hours.
Slim

It’s been snowing like crazy for the past hour. I’m hoping this band doesn’t move much… if it stays over the same area for 5-8 hours there would be a lot of snow

Had a period of heavy snow move thru. Still snow at a good moderate rate but less so then it was. Have not went out for a snow fall measurement yet.
Slim

As fast as it started the snow is now just falling at a light rate. As is such for Lake effect.
Slim

We picked up another 9 inches of snow from 9 am yesterday to 9 am this morning. It was 18 degrees at 8 am this morning as I was plowing with my tractor. We are now at 24 inches for the week!

Wow that’s a lot. I’ve in total have picked up 9” from this event which is a lot for this far inland from the lake. At 11” for the month of November.

Not bad and you might get another 10 inches or so today!

Just another typical MI winter day! Keep it rocking! This could be a great winter!

If you want to escape the snow, head over by Lake St. Clair. I was in Saint Clair Shores yesterday and nothing but green grass and no snow other than a small amount on rooftops. I’m back in West MI now. Picked up about another inch here in Portland last night

While the data is very old and not sure how accurate. But in the book Michigan Weather from 1947 to 1992 the average annual snow fall at Gross Point is listed as just 28.7″ Not too far away at Detroit City AP from 1918 to 1992 the annual average is listed at just 35.2″ Of course they do not receive much lake effect from Lake Michigan and there is almost not if any from Lake St Clair.
Slim

Just drove over 1-96 on Forest Hills Ave and it was all backed up, looked like a crash to the east with police cars… must be slippery on the highways

Above average snowfall?? Get out of here ..INDY

Only mid November and we already over 20% of the RDB seasonal snowfall prediction! Keep the snow rocking for the next 4 months! I love it!

…WINTER STORM WARNING IN EFFECT UNTIL 7 AM EST SUNDAY…

* WHAT…Heavy snow and blowing snow. Additional snow
accumulations of 4 to 10 inches. Winds gusting as high as 40 mph
this afternoon and evening. Wind chills dropping into single
digits by tonight.

* WHEN…Heavy snow developing around noon through this afternoon
and into this evening.

* WHAT…Heavy snow and blowing snow. Additional snow
accumulations of 7 to 10 inches. Winds gusting as high as 40 mph
this afternoon and evening. Wind chills dropping into single
digits by tonight.

* WHEN…Heavy snow will begins around noon today and continue
into tonight.

* WHAT…Heavy snow and blowing snow. Additional snow
accumulations of 4 to 11 inches. Winds gusting as high as 40 mph
this afternoon and evening. Wind chills dropping into single
digits by tonight.

* WHEN…Heavy snow will begin late this morning and continue this
afternoon and evening.

* WHAT…Heavy snow and blowing snow. Additional snow
accumulations of 5 to 8 inches. Winds gusting as high as 40 mph
late this morning through this evening. chills dropping into
single digits by tonight.

* WHEN…Heavy snow quickly begins around 9 AM this morning and
will continue through this afternoon and evening.

At Grand Rapids the official H/L yesterday was 30/23. There was 0.27” of total precipitation, 7.0” of snow fall and just 3% of sunshine. The two-day snow fall at Grand Rapids is now at 14.6” and for the month of November it is now at 18.2” Here in MBY I recorded 2” of new snow overnight and there is now a total of 9.5” on the ground. There would be more on the ground, but the ground is still warm and there is melting taking place from the bottom of the snowpack. The overnight low here in MBY was 23… Read more »

This has been a pretty incredible event. All time 24hr snowfall record broken in NY. We erred on the side of caution and did not venture to Kazoo last night. I see thundersnow is mentioned in the forecast discussion. I’ve only witnessed that a couple of times.

Enjoy your weekend and be safe.

I have mentioned this before but I have now lived in Grand Rapids since 1984 and do not really remember seeing thundersnow here in GR. In fact the last time I seen a thundersnow storm was in March of 1984 before moving here. In Bay City there were many times of thundersnow storms. With some of the biggest ones in 1967 and 1978 blizzards. Odd that there is no mention of blizzard like conditions for today.
Slim

Although a rather rare phenomenon… some thundersnow also is
possible this aftn given delta t/s reaching the 25 C threshold
and vigorous upper level energy. Fcst soundings also show eq
levels as a proxy for convective depth will reach 12-15 kft agl
which is also conducive to thundersnow potential.

IF you don’t have to go out today, stay home! A weather disturbance moving through the Great Lakes today will interact with Lake Michigan and touch off heavy lake effect snow. The heaviest snow will occur at any one location for about 2 to 4 hours, starting in Ludington around 800am, reaching Grand Rapids around Noon and Kalamazoo around 300pm. This will be the heaviest snow we have seen throughout this event with inch per hour snow possible for about a 3 hour period at any one location. The heavy snow will come with wind gusts that will likely reach… Read more »