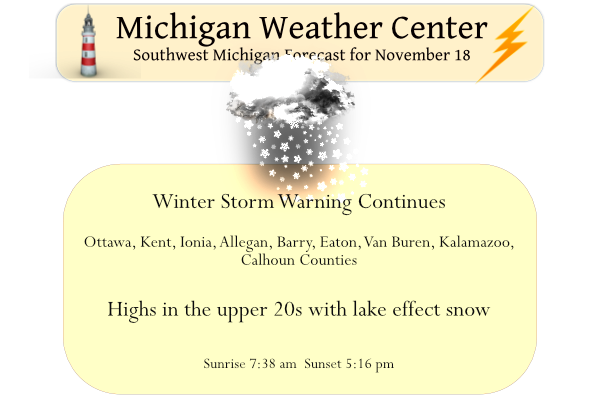 For the past couple of years, we haven’t seen many lake effect events, we are making up for it with the snow showers pouring in off Lake Michigan yesterday, today, and tomorrow.  We are closing in on nine inches so far in the Otsego/Plainwell area, we had six inches by dusk yesterday.  For current school closings, you can go here.

Our high was 33° and the low was 25° yesterday with periods of moderate to heavy snowfall.

Im thinking Blizzard warnings coming especially for the inland Countys today for part of the day we will see definitely going to have white out conditions and Blizzard conditions this morning….INDY

GREAT SCOTTY it has been snowing since Thursday .. indy

GR has seen 14.6 inches of snow since the event started! This could be a record breaking 3 day event! Wow, just wow! What happened to the above normal temp month! We are now well above the seasonal average for snow! Incredible!

Wow to the wow …INDY

We now have over 12 inches of snow…

Possible Blizzard tomorrow?? Definitely Blizzard conditions we are going to haft to track it im thinking tomorrow will be the worst day of the weekend with lots of wind and heavy lake effect snow as the winds go sourhwest ahead of the cold front look for another 10+ inches of snow for Grand Rapids like I said Thursday 20+”inches is not out of the question be safe everyone….INDY

With the winds I was wondering the same thing. We shall seee.
Slim

Snowfall totals south of Buffalo have now reached 4 feet in at least one location. Blasdell, New York, about 8 miles south of Buffalo, has received 48 inches of snow, including 6 inches in a single hour, between 1 p.m. and 2 p.m. Heavy snow will continue falling the remainder of the day and through the night.

My niece lives in Watertown,NY and is expecting at least 3ft of snow.

That’s crazy! We have maybe 4″ on the grassy surfaces. It hasn’t snowed here since midday. The sun has come out a couple of times this afternoon. The wind has become really cold.

…WINTER STORM WARNING NOW IN EFFECT UNTIL 7 AM EST SUNDAY…

…WINTER STORM WARNING NOW IN EFFECT UNTIL 7 AM EST SUNDAY…

…WINTER STORM WARNING IN EFFECT UNTIL 7 AM EST SUNDAY…

I plowed with the lawn tractor again this morning, we had another 5 inches of snow by 8 am – we have had 15 inches of snow this week so far. Luckily I can bank up the snow on the opposite side of the road (I live on a dead-end road). The chains on the back wheels come in handy.

Issued at 1029 AM EST Fri Nov 18 2022 We are expanding the winter storm warning both northward in area and to 12Z Sunday in time to account for our next wave of lake effect snow. The advisory for our easternmost counties will also be extended in time to 12Z Sunday. This is to address the growing threat Saturday morning that will continue through the day and Saturday night. We are in a relative lull today and early tonight and will try to express that in the forthcoming warning and advisory products. In addition to snow Saturday, we are concerned… Read more »

That is rather interesting. We will have to see just how that plays out. Been getting on and off moderate snow fall today in the “lull”
Slim

Lots of lightning yesterday at the east end of Lake Erie. Big numbers south of Buffalo:

A little over 7” at my house. Currently

Just measured where I have been measuring…we are at about 8.5 inches… And snowing pretty good right now!!

The snow is picking up here again. Looks like the heaviest banding last night was to my north and south, but we still got a couple inches last night

Good catch Rocky. I changed to to that 7.6″ and that will bring the November total up to 11.6″
Slim

Wow is right! We’re supposed to go to Kazoo this evening. If you have a chance later this afternoon, would you mind posting a road condition report?

I live on a county road and so far no sign of a county plow. Snowfall has slowed down and only additional inch after my A.M. post. Very little traffic compared to normal. However, I’d bet the main roads are being taken care of pretty well. Temps are reasonably warm so salt trucks will eliminate any icing.

Yes that sounds great. I have picked up 9 inches since it started!

Woke up to approximately 3” of snow. Looks like nearly every school west of Ingham county is closed – much to the dismay of our son.

Let’s review the facts!
1. GR saw a record snowfall for the date yesterday!
2. Virtually all schools are closed today! Who knew?
3. This could be an all time record breaking event!
4. Winter is by far the best season in MI!
5. The MI Weather Center is awesome!
6. Rock n roll will never die!