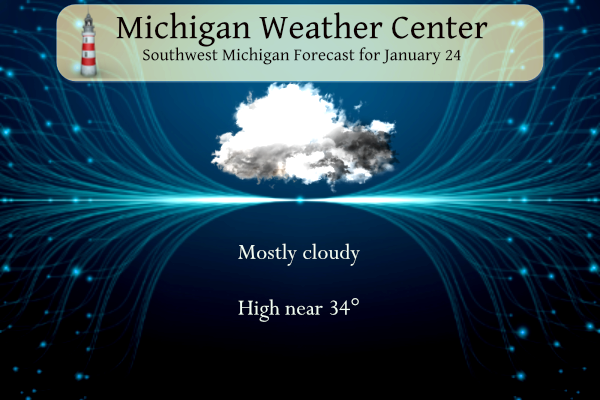 The theme and title of this post seem consistent with most of the posts for this month.  We had just 12% of possible sunshine in December and we’re at a dismal 11.3% sun for January.  Some area forecasters are once again trying to perk us up by seeing perhaps a few peaks of the sun today however I wouldn’t get my hopes up with a west/southwest wind coming off the lake.

The map below shows the current warnings and advisories for our next synoptic event.  I wouldn’t be surprised to see advisories for areas south of I96 later today even though snowfall amounts will only be in the one to two-inch range for SW Michigan. 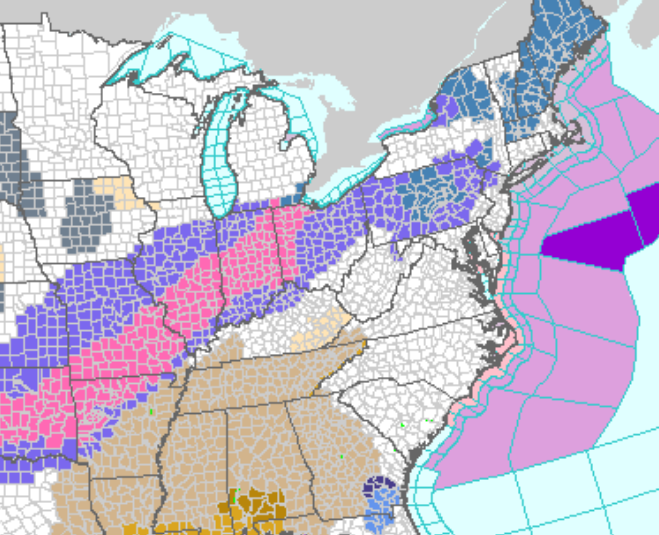 All of the snow warnings and advisories are contained in our southern counties. 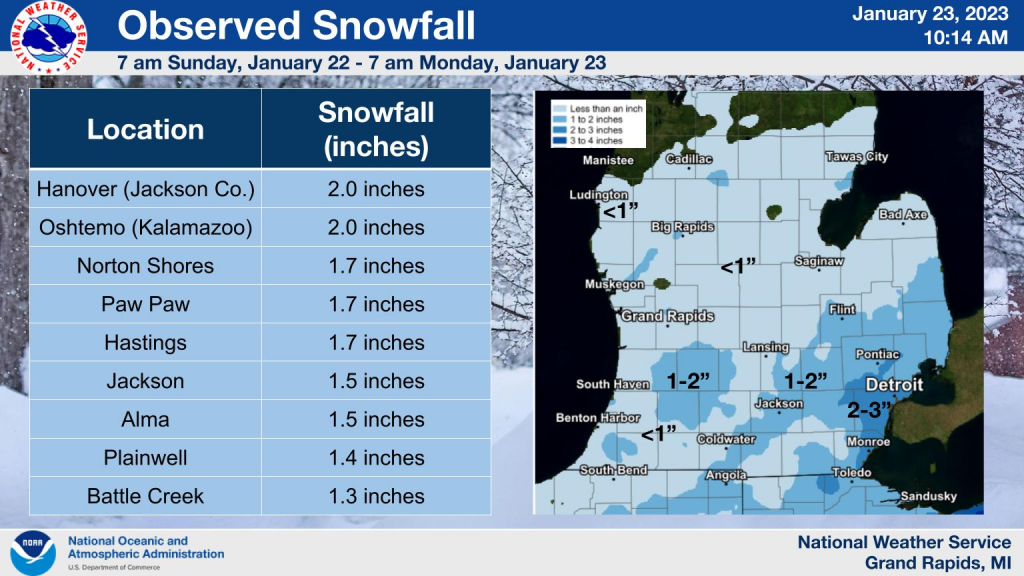 A light snow event occurred over Lower Michigan on Sunday. Most amounts ranged from 1 to 3 inches, which is more than most areas have had since the New Year. 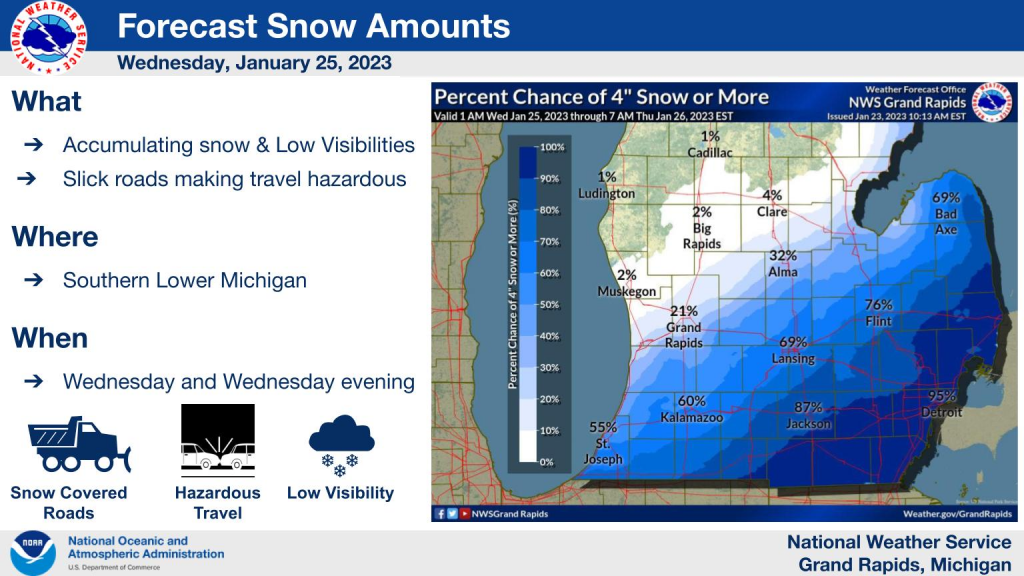 Highs in the teens next week brrrr!! INDY

My phone is showing overnight lows in the single digits Sunday night then again around Feb. 2

What? Winter is not over! Who would have thought?

Nice day today. Sun is still out and has been since mid morning – sorry westsiders. The sun kicked the temp up to 39 here and in all but shaded areas, the snow is gone.

And here to your west there was no sun at all.
Slim

…WINTER STORM WARNING IN EFFECT FROM 5 AM TO 8 PM EST WEDNESDAY… * WHAT…Heavy snow expected. Total snow accumulations of 6 to 8 inches. * WHERE…Wayne, Lenawee and Monroe Counties. * WHEN…From 5 AM to 8 PM EST Wednesday. * IMPACTS…Plan on slippery road conditions. The hazardous conditions could impact the morning or evening commute. * ADDITIONAL DETAILS…Light snow will develop around 6 am, however, amounts and impacts during the morning commute are expected to remain relatively minor. Snow will then steadily increase in intensity with the peak of the heaviest snowfall rates between 10 am and 4 pm… Read more »

Tomorrow’s post will be on the three blizzards in Michigan’s past.

My Saturday post will have a past weather event that even surprised me.
Slim

…WINTER WEATHER ADVISORY IN EFFECT FROM 5 AM TO 10 PM EST WEDNESDAY… * WHAT…Snow expected. Total snow accumulations of 2 to 5 inches. * WHERE…Kent, Ionia, Clinton, Allegan, Barry and Van Buren counties. * WHEN…From 5 AM to 10 PM EST Wednesday. * IMPACTS…Plan on slippery road conditions. The hazardous conditions could impact the morning or evening commute. * ADDITIONAL DETAILS…Snow will spread into the I-96 corridor between 800am and 100am on Wednesday. Moderate snow will occur through the course of the day. 2 to 5 inches of new snow will be common within the advisory by the time… Read more »

Broadcast from 1/24/14 (9 years ago) at 6pm. We were entering the core of one of the coldest periods from that winter. I’ve said it on here many times I’ll never forget that winter. I have a picture on my Facebook memory feed today of me and my dad helping someone push their late 90s ford Taurus out of deep snow on 16th street between 146th avenue and 108th st in Northern Allegan County. Wish I had an easy way to post the photo here. Funny part is my dad got stuck in almost this exact spot in his pickup… Read more »

So far no sun here in Grand Rapids. At the current time it is cloudy and 34 here at my house.
Slim

The sun is still shining. No snow left in the yard – a blank canvas for tomorrow.

Hey we got a little here this late afternoon. Disappearing quickly though.

I love it, mookie says no accumulating snow in our future and a WWA is posted and more snow this weekend and next week! Wow, to the wow!

Thank you GR NWS for using state of the art and 100% accurate temperature reading equipment! keep up the good work and facts are facts!

.WINTER WEATHER ADVISORY IN EFFECT FROM 5 AM TO 10 PM EST WEDNESDAY…

I was in GR just a short time ago and there was no sunshine at all from Kentwood all the way to the Lowell exit on 96. The sunshine breaks out right at the kent/Ionia County line.

Right now I have mostly sunny skies at my house.

We have virtually seen no sun the entire month of January!

Hey, the sun is shining on the capital city!

Good for you. No sun here yet.
Slim

I have received word back regarding the discrepancy in GR temps versus the averages. I was even copied on the e-mail chain between NWS GR and NCEI which was pretty cool. Long story short, the NCEI and NOAA are blaming a recent instrument change at the local NWS GR station. NWS GR, meanwhile, stands by their temp reporting and was hoping NCEI could re-do their averages. Neither side is budging but both acknowledge an issue.

The pattern changes is starting to look excellent! Bring it!

Garbage maps. This map you posted last week was only about 15″ off for GR LOL

Currently the second cloudiest January on record. I would happily trade the sun for some colder temps

The pattern change is looking great for cold and snow! Incredible!

Looks like we have one snow system after another for the next 2 weeks! GR is already over 70 inches of snow! Wow just wow!

Looks like another miss for GR as the bulk of the storm slides south. No big systems in sight!

Good morning! Well it took until January 24th but for the first time this month there is more than just a trace of snow on the ground here. At this time there is a whopping 0.25” of snow on the ground in my yard. For yesterday the official H/L at Grand Rapids was 32/27 there was 0.01” of precipitation that was 0.2” of snow fall. There was once again no sunshine. The overnight low so far for today is 29 and the current temperature is 30 with cloudy skies. For today the average H/L is 30/18 the record high of… Read more »

Well, looks like I will have to dust off the shovel.

Fort Sill, OK is supposed to get 2-4” today. I was there for two winters and the most we received was just a dusting.