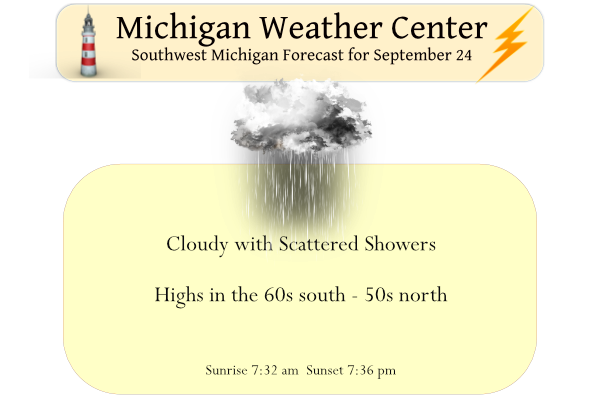 Right on clue we jumped into autumnal equinox with a big cool down and now have settled into a much cooler weather pattern. While we very much could see some warm days ahead we can say that we have turned the corner and the days will be getting shorter (as related to daylight)

We have now officially into the autumn season. While we have been in meteorological autumn for some time we are now past the autumnal equinox. There are two times each year when the number of hours of daylight are 12 hours and that is the spring equinox and the autumn equinox.

We have been losing daylight since June 21st and will continue to until December 22nd Today September 23rd at Grand Rapids there is 12hr 9m and 53s and by December 21st there will be only 9h 00m and 30s and then the process will start over once again.

It is this loss of daylight that has the most to do with the changing of the color in the leaves or at least that is what many claim to cause the change. But it is a combination of daylight, moisture and temperature.

Here are couple fun facts about the fall season

The equinox it just a point in time. Although the autumnal equinox is observed  all day on Sept. 22, it’s really just a moment in time — to be exact it’s when the sun crosses the equator, an imaginary line in the sky above Earth’s equator.  At this precise instant the Earths rotational axis is neither tilting toward nor away from the sun. For 2022 that took place at 9:04 PM EDT.

The word “equinox” comes from Latin words meaning equal and night, but day and night are not exactly 12 hours each on the day of the equinox. Due to the refraction of sunlight (i.e. bending of the sun’s light rays), the sun will appear to be above the horizon in some places when it’s actually still below it.

Although the autumnal equinox is generally Sept. 22 or 23, occasionally it falls on Sept. 21 or 24. That’s because the calendar used in the West (the Gregorian calendar) defines a year as 365 days, or the length of time it takes for Earth to orbit the sun. In actuality, Earth takes 365.25 days to go around the sun. So, this means that the September equinox will be six hours later than it was the year before. (The inclusion of leap years sort of resets the date.) In 2092,2096 the autumnal equinox will be on Sept. 21.

Well my sister is glad she is in Austin, TX right now and not back at her place near St. Petersburg with the hurricane. She loves Florida but fears hurricanes. The benefits of Florida outweigh the negatives IMO and she agrees otherwise she wouldn’t live there.

Wow, what a below normal temp pattern was are in! Incredible cold pattern!

The egg balance is a fun exercise for kids because it teaches them that it is just as hard to balance an egg on the equinox as it is any other day of the year. The earth is always angled at 23.5 degrees all year, it is just the location around the sun where the amount of light is determined

Slim when I was young my neighbor made it a challenge for us to do the egg balance…I remember one of getting it evey time. It was so fun.

I have family that arrived at Anna Maria Island on Thursday for a two-week vacation. 24 hours later, they are in the center of Ian’s cone of uncertainty.

I hope everything works out for them. Hurricanes are one of the things one must put up with if going to Florida in the late summer into the fall season.
Slim

My sister lived near St. Petersburg. She’s in Austin, TX right now on a travel nurse assignment and she’s glad she is because she would be very nervous.

I like the term “Fall Fresh” has a nice ring to it.
Slim