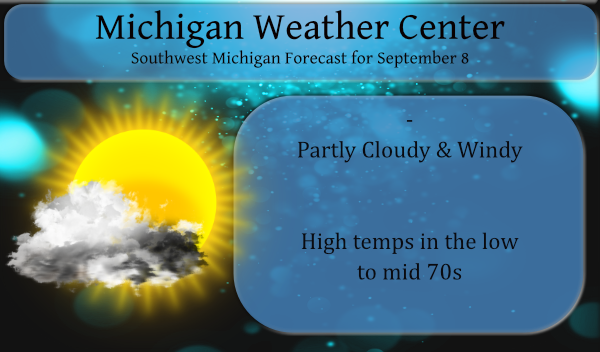 The NWS Grand Rapids radar (KGRR) went offline yesterday during the storms (an inopportune time) and is still offline this morning.  I had to use the KLOT Chicago and KAPX Gaylord radars for storm tracking.  I use Radarscope Pro.

Below is the NWS summary of the storm damage:

We had some thunder and lightning in the Otsego area and some brief gusts of winds but only managed .10 of an inch of rain which brings us to .15 for the month.  Yesterday’s high was 84° with a low of 52°.

1997: Cool weather prevailed with scattered frost and a record low of 34 degrees at Lansing.

1881: Temperatures hit the mid and upper 90s as a four-day heatwave peaked across Lower Michigan. Lansing reached 97 degrees for their second record high in a row, both records that still stand.

1960: A three-day heatwave peaked with record highs of 96 at Grand Rapids and 94 at Lansing.

2001: Severe thunderstorms produced widespread wind damage. About a dozen trees and several telephone poles were blown down in Saranac in Ionia County.

1874: One of the longest heatwaves in the month of September is underway with Lansing hitting 95 degrees. Lansing would have eight consecutive days with high temperatures in the 90s from September 7th to the 14th.

1968: A tornado injures one person as it damages several businesses in Cedar Springs in Kent County. Another tornado damages a farm west of Monroe, Michigan.

2001: A tornado moved through Delta Township and into the western outskirts of Lansing causing heavy damage over an eight-mile-long path. There were minor injuries and several barns and other buildings were damaged or destroyed.

1917: High temperatures were only in the middle 50s as cool and cloudy conditions prevailed.

1931: A record high of 94 degrees was set at Grand Rapids, contributing to the warmest September on record there.

1946: A weak tornado hit near Albion in Calhoun County around 730 AM, with damage limited to several downed trees.

1986: Clusters of thunderstorms moving along a stalled front bring record rains to Lower Michigan for the second straight day. Widespread rainfall amounts of 2 to 5 inches result in extreme flooding and contribute to making September 1986 the wettest month on record across the area.

2013: A severe thunderstorm with wind gusts of up to 80 mph brought down numerous trees and power lines in Albion, Michigan. Albion College was closed for several days due to all the wind damage and loss of power.

On September 5, 1984, Detroit experienced a record low of 42 degrees. This was the first of 2 consecutive days to experience a record low. On the 6th, the temperature dropped to 38 degrees.

On September 7, 2010, winds gusted between 40 and 50 mph across Southeast Michigan, with the strongest winds occurring over the Detroit Metro area. A few trees and tree branches were blown down, some of which fell onto power lines. Very low humidity levels, less than 25 percent, allowed the sparking wires to touch off fires across Wayne County. The wind-swept fires destroyed 90 occupied homes and damaged 71 vacant homes and garages. No injuries were reported.

On September 8, 1997, a waterspout was sighted over western Lake Erie. It was located offshore from Bolles Harbor which is just south of Monroe.

On September 9, 2001, a cold front finally passed through Southeast Michigan ending an unusual three-day severe weather outbreak in September. The cold front slowly approached the western Great Lakes region on the 7th and 8th while warm and unstable air ahead of this front allowed thunderstorms to develop during the afternoon and evening hours on all three days. Most of the thunderstorms that developed over this three-day period produced severe wind gusts. The most common type of damage from these storms was trees being blown down or broken.

On September 10, 2017, Flint tied the record low of 36 degrees last reached in 1969. This was the 3rd day of reaching or exceeding record lows in the first 10 days of September.

On September 10, 2002, a strong cold front moved through eastern Michigan during the afternoon. Due to the drought conditions that year, the thunderstorms resemble those of the high plains with high cloud bases, less rainfall and strong winds. Hundreds of power outages were blamed on these thunderstorms. The more widespread tree damage in eastern Michigan occurred across portions of Shiawassee, Huron and Livingston counties.

On September 11, 2000, widespread, severe urban flooding resulted in a Presidential Disaster Declaration for Wayne County. The communities most severely affected included Allen Park, Dearborn, Dearborn Heights, Ecorse, Lincoln Park, Melvindale, Riverview, Southgate, Taylor, Van Buren Township, Wyandotte, and Wayne. Over 15,000 residences and other structures in Wayne County suffered at least some flood damage. Numerous motorists had to be rescued from their stalled and stranded vehicles. The Governor of Michigan estimated $19 million in personal property damage in Wayne County but said that estimate was conservative.

A couple of thoughts:

I’m surprised the NWS GR radar is still out. That must have been some lightning strike.

Anyone know if Bill got his car back yet?

Im getting a new snowblower soon last year mine about died its old its time ..INDY

I finally had to replace mine two seasons ago. I had a Toro 521 dual stage, self-propelled that was built around 1980ish that my dad gave me a long time ago. Ran the gas out of it every year along with changing the oil and spark plug at the start of each season. I always put a bit of fresh oil through the spark plug hole before the first start of the season. It was a beast and it never failed me. The motor mounts finally rusted out. I suppose I could have fabricated some new ones, but I figured… Read more »

Looking at the GR almanac. GR averages 131 days per year at 70+ degrees. That’s a lot of summer days!

Meanwhile, GR averages 90 days per year where the average high temp does not climb above 40 degrees. Fairly short winter.

The remaining 144 days have average high temps between 40-70 degrees.

Just keep the 90’s at bay like this Summer ..I will take a Summer like we just had every year probably not the only one …INDY

Yeah, one of the warmest summers we’ve ever had. I love it!

On the other hand GR averages 130 nights when the low is 32 or colder and only around 60 days when the low stays above 60. So all in all Grand Rapids is not all that warm either.
Slim

68 here with a cool, dry breeze here. Not a cloud in the sky. It doesn’t get much better this time of year.

Lets keep this cool weather rolling before we know it the leaves will be falling….Its the mostly wonderful time of the year grass cutting is at a 2 week spread now everything is slowing down woo woooo…INDY

The grass isn’t growing because of the lack of rain. Most yards around here are all brown because it’s been a month since our last soaking rain. If we get a solid rain everything will be growing like crazy again.

My sidewalk was wet this morning it must of rained at some point in my area soon it will be snow woo woo..INDY

Quite the temperature spread yesterday from the lower 50’s to the upper 80’s. To bad we couldn’t get more than a few drops of rain. Been a month now since our last decent rainfall.

Yesterdays rain looks to have been hit and miss. I did get some rain here. There was no storm here just some rain with some lightning mostly to the north of here.
Slim

3/10ths of inch of rain at the airport and I’m guessing we had about the same here. The lightning was awesome and all around us for more than a hour as several cells passed by.

The storms yesterday missed my local area. Here there was some rain (0.36″) and some lightning most of that was off to the north of me. The over night low here at my house is the current reading of 55.6 and with that reading there is clear skies.
Slim