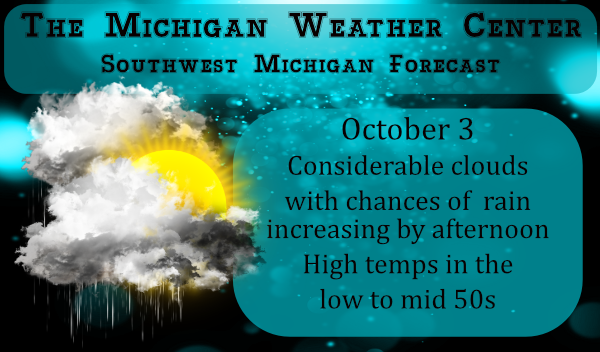 “ Another overall mild winter is possible for much of the eastern United States, but chances are better this winter for front end and back end wintry, colder weather in the Northeast leading to near-normal snowfall for much of New England and off Lake Ontario. Watch for a couple of spin-up snowstorms off the New England coast.”

2. Believe it or not last years Old Farmers Almanac was rather accurate in their long range guess. Last year they had November as -2 at Grand Rapids it ended up at -5.5. For December they guessed +4 and at Grand Rapids it was +4. For January they called for +5 and it was +6.9 and for February they called for -1 and it ended up at +0.7. All is all they had the right trend. For this upcoming winter they are calling for overall reading of warmer then average with a colder then average December and January and then a much warmer then average February. Month by month November +3 December-2 January -4 and February a whopping +10

3. The last CPC outlook for December thru February is calling for equal chances for temperatures and a higher chance of it being wetter.

Winter? Michigan will be getting hammered with snow! Expect a near normal temp winter and the storm track bringing one storm after another towards us all winter long! Get ready to rock n roll!

Thanks Slim! The Old Almanac calling for a +10 February?? Wow! Beach weather? If I were to guess, I’d still say yet another similar Winter as the past several. Cooler in November with some snow on the warm ground to drive all the crazies wild, then another mild December & January with more 50’s and 60’s and rain. Sounds perfect!

Yesterday was a mix of some sun but a lot of clouds. I recorded 0.01″ of rain. The overnight low here was 35 and at this time it is cloudy and 39 here.
Note the winter guess(s) above are not my guess. A good starting point for me is always “average” and then take it from there.
Slim

I cringe at thinking about putting together another winter forecast. Seems it has been in opposition to reality the past few years. The lake effect snow machine was pretty much turned off last year for SW Michigan – we had just less than 40 inches in Otsego. Winds were mainly from the north which gave the U.P. all the snow. Most of our snow came from synoptic events. I would dare say we should do better than the 40 inches of last year which in opposition would be less than that. We have 35 degrees here this morning under partly… Read more »

I stopped guessing years ago. Mother Nature always gets the last laugh.

I was in my sis-in-law’s wedding on October 5, 2011. It was an outside ceremony. Morning was cold and halfway through the wedding, it began to snow. The wedding party pics turned out amazing. Trees were in full bloom with snow falling. We groomsmen gave our jackets to the bridesmaids in between shots. It was a great day.

I bet the pictures were beautiful!!