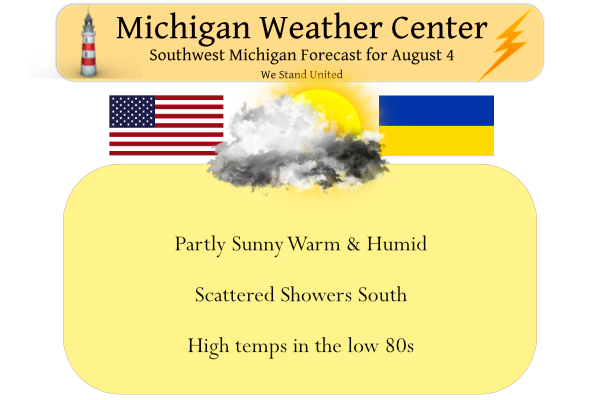 We had a storm which we hadn’t seen in several years yesterday.  We lost power around 4:30 pm in wind-driven rain and small hail.  The wind was in the 50 mph range.  We had 2.70 inches of rain in an hour which caused a lot of street flooding around town.  Our power came back on around 9 pm.  The silly thing was I had just commented to my wife about how we shouldn’t lose power because of the good job the tree crews have done through our area to keep the lines free, within seconds the power went out, should learn to keep my mouth shut.  Our neighbor’s car had a tree fall across it breaking the skylight and putting a long crease across the top.  Today will be a cleanup day as we have numerous branches and debris in the yard.

The honor for the most rainfall I could find was 4.10 inches in Vermontville.  WWMT was in Otsego after the storm, their report is here.

Here are the storm reports from the NWS: 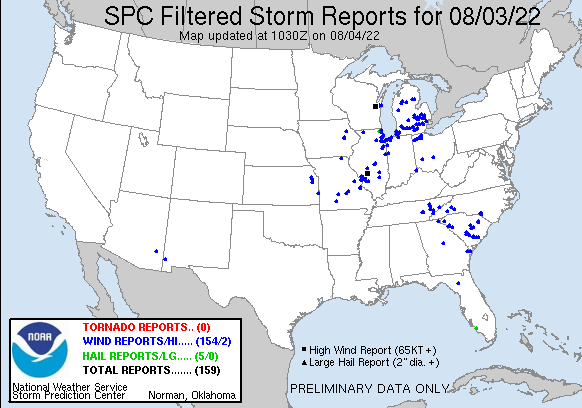 Humidity in Central to Northern Michigan will be lower on today, but uncomfortable humidity levels will stick around in Southern Michigan. A shower or thunderstorm could pop up during the day in roughly the southern half of the lower peninsula. Severe weather (thankfully) is not expected.

I will have the weekly weather history post tomorrow.

We lost our internet again. Was working this morning long enough to do today’s post. Hopefully will be back in the morning. I hate typing on my cell,my thumbs are to big. We currently have 79 with 90 percent humidity

Lots of internet issues. We lost ours.last night too. But some switch got zapped by the lightning yesterday too.

Picked up another 0.30” of rain at my house today. That puts me at I believe 2.50” of rain with yesterdays rain and todays.

The “jackpot” was over 5” according to radar estimated at the intersection of Saginaw Hwy and Boyer Rd in Eaton County. That’s only a little over 5 miles from my house.

Dew points still in the 70’s after the cold front went through?! Heat index in the mid 90’s, yup, it is hot and sweltering outside today again.

Getting some rumbles of thunder….

Send some this way! I think I would pay for some rain at this point. Had the sprinklers running all day again.

We have not any hot months since last summer! Wow!

Accuweather is out with their fall outlook and is calling for a warm fall for the midwest. They also said the Great Lakes region may see brighter than normal fall colors this year.

The trees around here do not seem as stressed as they usually would be this time of year. I think that’ll also help with the fall colors

Very odd day yesterday with all the rain and storms yet somehow we only had 4 hundredths of an inch. Watching the radars all day they rain would just disappear as it came overhead, then reappear just to the East of us. PWS just 3 miles South of here had almost an inch of rain yet we had a few sprinkles. Super humid out again today, almost suffocating walking outside.

A warm and more active start to August. We haven’t had a cool month since April!

MichaelV, just a few miles SE from your location we thankfully only had moderate winds, 0.40 inches of rain, not much lightning and no power outages.

Some areas got slammed yesterday – especially along the I-94 corridor. I feel for the campers at MIS.

We had two ST Warnings for Ingham county. It rained here for a couple of hours. I did see a nearby measurement of 1.54”. It was yet another near perfect forecast by the NWS and SPC.

The storms yesterday were south of me. I was on the southwest side of GR late yesterday afternoon and it did indeed get dark off to the South. There were rounds of showers and thundershowers for much of the day here yesterday. Glad you power was not off for too long. In the storms from July 23 my power was off for almost 20 hours. Yesterdays official H/L at Grand Rapids was 87/71 the official rain fall amount was 0.70” and there was just 11% of sunshine. Here in MBY I recorded 0.49” of rain fall yesterday. It was much… Read more »

Radar estimated 2.2” of rain around here so a nice soaking as well

Good to hear you got your power back MV. These storms yesterday were pretty significant. We got a tree laying on a house right up the street from mine and lots of limbs down as well. Second time in 11 days we got wind damage here. Did not loose power thankfully though but the lightning was intense and thunder was extremely loud.