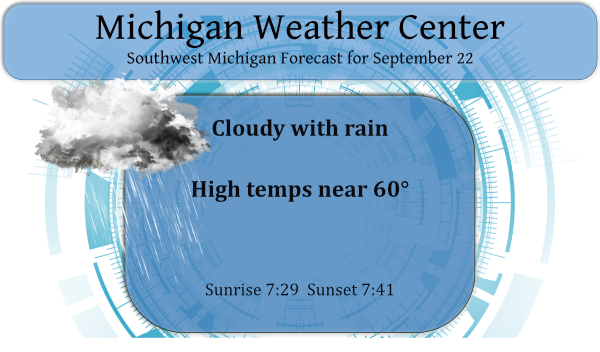 With the changing of the seasons comes the cloudy, cool and soggy air right on cue.  We had .59 of an inch of rain yesterday which brings us to .79 of an inch for the month.  Our high temperature yesterday was 74° which was just after midnight, our low was 57°.

We expect another cloudy day today with rain with the heaviest south and east of Grand Rapids.  Periods of moderate to heavy rain will continue across portions of Southern and Eastern Lower Michigan. Flooding is possible from Battle Creek and Lansing off to the east. It will be a cool day with highs holding in the upper 50s to lower 60s. It will turn windy today, especially near Battle Creek, Lansing and Jackson.

1957: Thunderstorms with heavy rain of up to 2 inches flooded streets and viaducts in Grand Rapids.

1968: A tornado hits a rural area about five miles south of Lansing at 2:15 in the morning, damaging two barns and a shed.

1863: Lansing records a low temperature of 19 degrees, the coldest on record for the month of September.

1956: Intense lightning from thunderstorms is responsible for 11 house fires in Ottawa and Kent Counties, accounting for thousands of dollars in damage.

1967: A small tornado struck just north of Lansing at 10:45 in the morning and destroyed a garage.

1952: Hail covered the ground like snow in Cascade Township, near Grand Rapids.

1961: A tornado hit two miles north of Marne. One person was injured and three buildings were heavily damaged.

2006: Small tornadoes hit Caledonia in Kent County and Muir in Montcalm County. The Caledonia tornado did some roof damage to a storage facility and a barn. The Muir tornado caused no structural damage but took down some tree limbs.

1950: Smoke from Canadian forest fires gave the sun an eerie bluish cast and darkened the sky across western Michigan.

1961: Widespread, heavy rain causes some flooding across western Michigan. Record daily rainfall totals occur at Muskegon, Lansing and Grand Rapids. The 3.52 inches of rain at Grand Rapids is a record total for any day in September.

On September 19, 2011, Detroit recorded 1.81 inches of rainfall which is a record for the date. This helped push Detroit to its 4th wettest September on record with 6.28 inches of rain. Interestingly, the September rain did not extend farther north. Flint record 2.09 inches and Saginaw had 1.73 inches which were both well below average and in the top 30 driest Septembers for those two cities.

On September 19, 2002, an upper air disturbance move across Lower Michigan during the late afternoon and evening hours on the 19th. This disturbance combined with unseasonably warm and humid air across Lower Michigan to trigger widespread thunderstorms. These thunderstorms initially moved into the Saginaw Valley during the late afternoon hours. During the evening, another round of thunderstorms moved from south to north across the region. Some of these thunderstorms were severe with damaging wind gusts, including an estimated 100,000 dollars in damage in Algonac and Harsen Island. Three men were installing a roof at an apartment complex under construction in Ann Arbor when they were struck by lightning. Two of the men were injured, while the third was later pronounced dead.

On September 20, 1978, Genesee county experienced winds of 63 mph with storms passing through.

On September 21, 2010, a cold front swept through Southeast Michigan producing severe thunderstorms north of M-59 during the evening hours. Most reports of severe weather were from the squall line that raced through the Tri-Cities, Flint and Thumb regions. There were 21 reports of severe wind gusts and tree damage.

On September 22, 2005, 3.62 inches of rainfall fell in Flint from multiple rounds of severe thunderstorms. Flash flooding was reported in both Genesee and Lapeer Counties. The severe thunderstorms produced wind damage mainly along the I 69 and I 94 corridors.

On September 23, 1974, record lows on the 22nd and 23rd of 30 degrees and 29 degrees, respectively, brought the earliest freeze on record to Detroit.

On September 24, 1997, southeast Lower Michigan saw its first frost of the year. The temperature fell to 32 degrees at Flint. This missed tying the record by one degree.

On September 25, 2007, thunderstorms ended a dry eight-day stretch of well above average temperatures in the upper 70s to upper 80s. Some of the storms were severe with the most damage occurring in Flushing. A downburst produced an estimated 80 mph wind gust which blew in garage doors and down hundreds of trees and large limbs.

Also on September 25, 1941, the remnants of a former Category 3 hurricane passed over Detroit. What was remarkable about the remnants of this storm was the high wind speeds and low pressure that accompanied it. Winds speeds remained steady at 56mph with wind gusts of up to 75mph! Dozens of people were injured from these winds. The pressure dropped to 990mb that day, which is the second-lowest pressure reading ever recorded for Detroit during the month of September.

Well for all rain predicted, Monday yield 0.00”, yesterday had 0.17”, and today there were a few drips early this morning for a whopping total of 0.17” over 3 days. Partly sunny now, time to mow the yard. Wish we could have these temps year around.

Cool and rainy here all day.

With the low pressure overhead, I would be very surprised if we see 60 today.

The first half of fall is one of my favorite times of year weather-wise (September 22-Halloween). I like November *if* it snows, but a lot of times November is gloomy and just too warm for snow.
I have seen some indications of an early winter by some other sources… but I doubt accuracy this far out. Happy Autumn everyone!

My favorite time of the year is late spring (late April into May) that is when things become green and the smell of sweet air from the spring flowers after a nice spring rain. But to each their own.
Slim

I love Fall and all the colors the leaves turn and my second season is Spring when every thing starts growing again. I love to see my garden start blooming.

Welcome to astronomical autumn. While today is the so called “official” start of autumn meteorological autumn started on September 1st. The official high at Grand Rapids yesterday was 73 that is close to the average high of 72. The record high for yesterday is 95 in 2017 and the record low is 32 set in 1962. The overnight low both here at my house and at GRR was 53 and that is also the current temperature. I recorded 0.35″ of rain fall. For today the average H/L is 72/51 the record high is 95 also set in 2017 and the… Read more »

Fall is here and that means we are closer to the Cold and Snow! Bring it on!