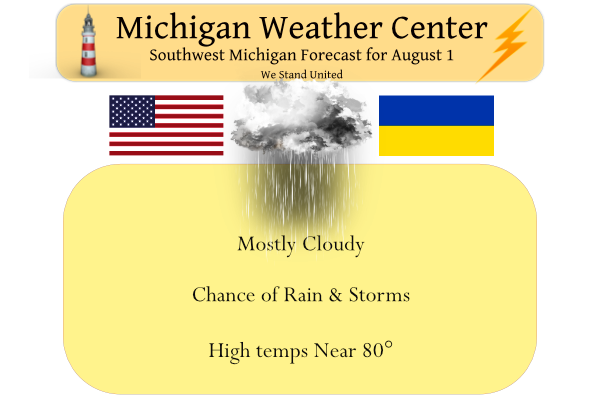 Showers and thunderstorms will be on the increase early this morning. Some of the storms could contain gusty winds. Then for the afternoon, the central area of showers and thunderstorms are forecast to push east of Lansing and Jackson, however, a few lingering light showers could persist. Most locations will end up in the 76 to 81-degree range for high temperatures today.

Lots of predictions on a hot week did we even make 80* degrees today?? I believe its 79* out in my hood currently… INDY

Too funny – how all the warm weather hype goes up in smoke! Maybe one 90 degree day this week in GR! Certainly no heat. Waves are sight! Incredible!

Definitely not100* degrees that was supposed to come .. INDY

I typically think of August as the warmest month (I know it is technically July). Same thing with winter, a lot of times February feels like the coldest month (even though it is January).

Welcome to August. July 2022 at Grand Rapids seen a mean temperature that was exactly average. The mean for the month was 72.1 and that was average. The highest reading was 90 and that occurred on 4 different days the low for the month of 52 was on the 10th There was a reported 2.82” of rain fall and that was below the average of 3.86. At Holland their mean was 72.1 for a departure of +0.5 it was much wetter at Holland as they reported 4.51” of rain fall. At Muskegon their mean was 73.4 that was a departure… Read more »

The official H/L yesterday at Grand Rapids was 80/60 there was no rain fall and the sun was out 77% of the time. Here in MBY the overnight low was a warm 70 and at the current time it is 72 there are a few showers to the west of here but not sure how much if any rain will fall here. For today the average H/L has started it downward trend at 82/63. The record high of 98 was set in 1988 and the low of 74 was set in 1947. The week ahead now looks cooler than it… Read more »

July was a very nice month. 🙂

Rock on Slim! The facts keep getting in the way of all the warm weather fantasies! Basically a normal temp summer so far! Wow just wow!