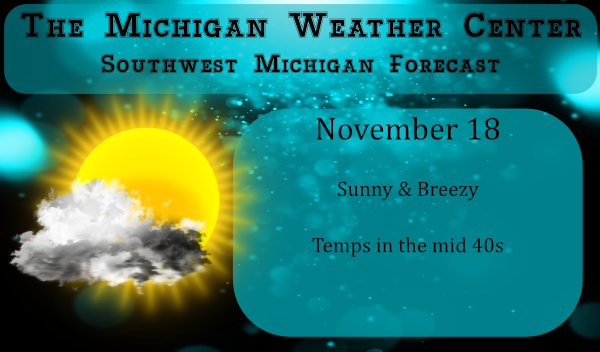 We have a temp of 26° at 4:30 this morning with clear skies.  We have expectations of another brief warming trend coming for tomorrow and Friday with temps in the 50s to near 60° and it will be breezy once again.  Seems we have been consistently windy over the past couple of weeks and it makes me wonder how this pattern would play out if we have a snowy December with the pressure gradients being as they are lately.

This weekend is starting to look interesting as the models still are trending our next system southward dragging down cold air with it which could give us a couple of inches of snow.  It is still too early to say for sure so I wouldn’t get too excited until we get closer to the weekend when all the models come together with a more reasonable guess.

1933: Michigan is in the grip of a four day cold snap. The low of 10 degrees at Grand Rapids only rises to 18 degrees during the afternoon as lake effect snow showers swirl around and an icy northwest wind makes it feel even colder.

1959: A vast area of arctic high pressure brings record cold to much of the continental United States. High temperatures only reach the teens across much of Lower Michigan followed by record lows in the single digits on the morning of the 17th.

1989: Grand Rapids picks up seven inches of snow, bringing accumulations during a three day storm to over a foot.

2013: A squall line of severe thunderstorms moved through Lower Michigan during the afternoon bringing widespread wind damage. Hundreds of trees were knocked down and thousands lost power from downbursts and brief tornadoes along the line of storms.

2014: Arctic air prevails with high temperatures in the teens and heavy lake effect snow. Nearly 10 inches of snow falls at Grand Rapids, contributing to a record November total of 31 inches.

1930: Record late-season warmth was across Lower Michigan with highs of 74 degrees at Grand Rapids and Lansing.

2000: An intense lake effect snow squall dropped almost a foot of snow on Grand Rapids, setting a record for the most snow in a November day there.

1913: Record warmth prevails across Lower Michigan with high temperatures in the upper 60s and lower 70s. The 70 degree reading at Grand Rapids is a late-season

I noticed the webcams above don’t work. I like the new page you added.

Was down to 22 here last night. Brrrr

Here comes another warm up!

The overnight low both here at my house and out at the airport was 23. Yesterdays official high of 38 was the coldest high since April 15th. At this time it is 31 here at my house with a lot of frost.
Slim