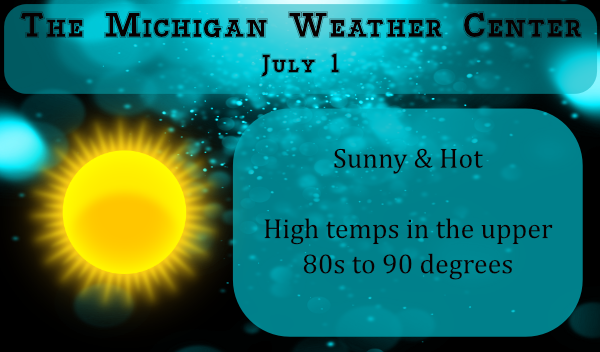 My youngest cat Monster is generally a house cat who thinks he needs to be an outdoor cat snuck outside the night before last and decided to explore the area around M89 which is detrimental to animals who try to cross it.   He got hit by a car and somehow dragged his way all the way back home which is a block north from the highway. This was his first and hopefully last exploration of the hazards of going beyond the woods which surround my neighborhood.

I took him to Bluegrass Animal Clinic in Plainwell.  Upon inspection and X-Rays, they found no broken bones though his tail is slightly disarticulated at its base.  He is badly bruised though and may lose his tail if it doesn’t heal properly.  He gets to come home today with pain killers and the loss of a lot of hair because the clinic had to shave him to inspect him.  He is a long-haired cat so it is going to take a while for it all to grow back properly.  He has used up two of his nine lives, he fell 20 feet from a tree when he was a kitten.  He is my baby and buddy so I hope all goes well with his recovery.

1930: Severe weather struck Lower Michigan. A tornado and downburst event destroyed a church and several barns with an intermittent path of damage from Scottville to Cadillac.

1995: As much as four inches of rain within an hour left streets and basements flooded in the city of East Grand Rapids and in southeast sections of the city of Grand Rapids. Water standing two to three feet deep stranded cars along one street, but most damage was due to flooded basements.

2005: A weak tornado moved across rural areas of Newaygo County, causing no damage. The tornado was a type known as a landspout. Several photos captured its brief but impressive existence.

1999: A weak tornado made intermittent touchdowns during the early afternoon in Newaygo County. A few tree limbs were downed, but otherwise there were no damage reports, as the tornado remained over rural areas.

2009: The coolest July in Grand Rapids history begins with a record cool high of only 64 degrees as clouds and scattered showers prevail.

2001: Frost and freezing temperatures were observed in some locations with a 29 degree temperature recorded in Grant, Michigan in Newaygo County. The 39 degrees at Muskegon was the coldest July temperature on record there.

2008: A line of severe thunderstorms brought high winds, large hail, and some flooding from Muskegon to Grand Rapids and Lansing, south to Kalamazoo. In western Allegan County, winds estimated up to 75 mph brought down dozens of trees and snapped eight power poles. A roof was blown off a home in Kalamazoo County. Hail up to 1.75 inches in diameter caused damage in Muskegon County.

1966: A five day heatwave peaked with temperatures in the upper 90s. The high of 99 degrees set a daily record at Lansing, the second in a row following a high of 98 degrees on the 2nd.

1911: The phrase Hot as the Fourth of July gains new meaning as temperatures soar to near 100 degrees, for Michigan’s hottest Independence Day on record.

1969: Nature’s fireworks turn violent as severe thunderstorms form in the evening and drop several tornadoes across Lower Michigan. More than 60 people are injured, most of them from a tornado that hit Flat Rock in southern Wayne County. This tornado destroyed a tile factory, carrying sheet metal over a mile. Another tornado injured eleven people about four miles east of Jackson as it damaged a dozen mobile homes.

1974: Tornadoes strike Lower Michigan during the early afternoon. One person is injured as a tornado damages several houses between Charlotte and Potterville in Eaton County. Tornadoes also damage barns and outbuildings in Huron and Tuscola Counties.

1977: A widespread severe weather outbreak hit Lower Michigan with tornadoes and downbursts. Two people were injured and almost a million dollars damage was done. A tornado injured one person and destroyed two mobile homes and one barn near Maple Ridge in Arenac County. Another person was injured by a tornado at Otisville in Genesee County as four mobile homes were destroyed there. Two homes and a camper unit were heavily damaged as a tornado moved from southern Isabella County into northern Montcalm County, ending northeast of Vestaburg.

2003: The July 4th holiday turns tragic as seven people drown in rip currents on the eastern shore of Lake Michigan. A line of thunderstorms earlier in the day had produced strong winds across the middle of the lake, and the dangerous currents formed several hours later. 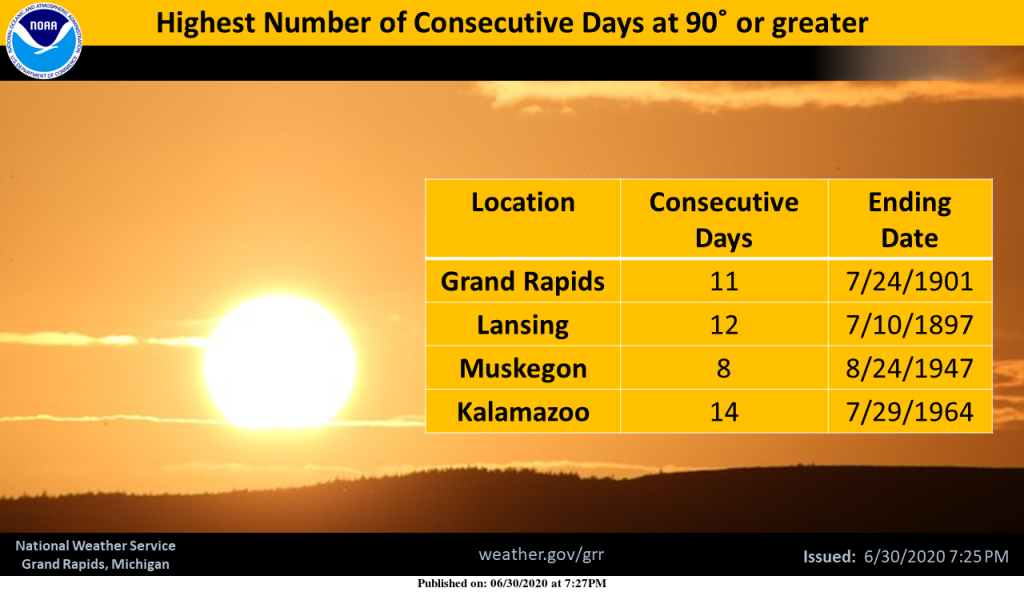 Above is the highest number of consecutive 90 degree days for our area.  We will see 90 or better right into next week.  It looks at this point our next best chance of rain won’t be until next Tuesday into Wednesday.

Forget all this sun and heat! We rain and cooler temps and fast!

Currently 82* degrees out at thee YARDofBRICKS NE of GR cracking a cold sprite today will be feel right in some shade… Maybe a shot of hot damn ….INDY

According to Bill Stiffen June 2020 had 87% sunshine. There is not a good record for the percentage of sunshine records. As far as I can find the highest sunshine for Grand Rapids for June is 81.7% in 1963
Slim

False. It says 82% on NWS. Would still be the record though I think!

I reread Bill’s post (or I should say I read it) the first time I just looked at the chart and did not read below where that 87% was as of June 21st. You are right that according to the NWS June had 82% not sure if that is a record or not. I have that 81.7% in 1963 as the record. So we will still call this the sunniest June at Grand Rapids unless someone can find a year with more. Note I am not sure of that 1963 record as it comes from WZZM when they had their… Read more »

Yeah…CH13 is calling this our “sunniest” June, per the NWS, through 1905. I’m a believer…our days are nothing but full sun…perfect 🙂

Awww, sorry to hear about Monster. So glad he found his way home and you were able to get him the care he needs. Sending kitty hugs and purrs for a speedy recovery.

The best news about this heat wave is that it will be dry with rather low humidity. This means our lakes are going to experience severe evaporation. Let’s hope we see big declines in lake levels!

Thanks Slim! It was dry that year, everything was crisp and brown. Graduation year so I lived at the beach for most of the Summer.

I hope everything goes well with Monster. I have a girl cat and we had to take her to the vet a few weeks ago she did not eat for 4 days and it turns out she had some thing stuck in her lower intestine. The vets got it out and she is now back to herself.
Slim

Biggest heat wave ever coming??? Lol let me know when we start picking off record high temps!!! Currently We had a low of 65* degrees overnight not bad sleeping with a fan on!! With the humidity running low dose it really feel that bad outside?? It is Summer right? Have a super Hump day …INDY

If by biggest you mean longest, yes it is quite possible. Look at MV’s chart above, then look at the forecast. If it plays out there is a good chance it will be record breaking.

Always downplaying the heat and over-hyping the cold and snow. The shtick is up!

Lake Michigan temps are already well above average and climbing fast the next 2 weeks.

Biggest heat wave upcoming in many years and no Indy or Rocky in sight!

Lol Rocky’s last weather report was back in May before the covid19 got in his head , I’m a 4 season blogger one of the few on this page hot try though! INDY…

Both of you must be on vacation. Very few, if any, posts lately. Hmmmm

No just boring weather what’s there to post about?? Lol….Cold Sprites will Taste right today that’s for sure!! Let me know when we break a record high temperature durring our biggest heat wave ever!! Yawning…INDY

Hope your cat heals up! We’ve had a few outdoor ones over the years, but they never last to long by our busy roads.

Hey Michael, glad to hear Monster is coming home today. We have our nearly 18 year old cat Pablo at home, he generally just lays around all day and really likes to just be indoors thankfully!

Hey Andy I hope your enjoying Summer with the heat wave coming im off to the store get more sprites and ice probably some ice cream to INDY is always prepared for the next big Weather event …..Have a super 4th of July stay cool INDY …

Hey INDY! Hope you have a great 4th weekend! We’ll probably be near the Lake or pool all weekend! Stay cool!