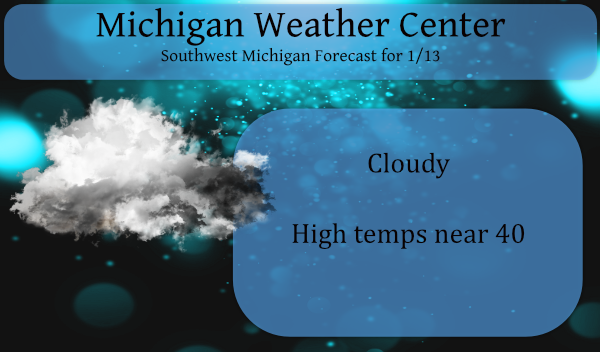 Though our weather remains bland out to our west the winds rage in the northern CONUS from Montana to the Dakotas into Nebraska.  Winds gusting up to 70 mph will cause all sorts of issues over a large area (areas of brown and tan on the map) including power outages and trees falling.  Many areas are recommending people to stay home and away from windows. 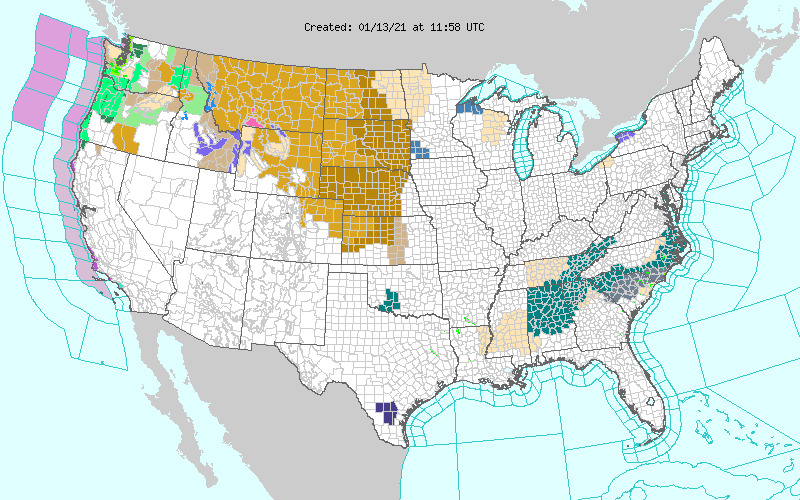 1982: Extreme arctic outbreak brings record cold temperatures and massive lake effect snow totals. Muskegon has their snowiest calendar day on record with 22 inches. This contributes to the all-time record monthly snowfall of 102.4 inches (8 and a half feet!) at Muskegon for January 1982.

1890: Temperatures reach a record high of 63 degrees at Lansing during one of the warmest Januarys on record.

1979: Arctic air and a deep snow cover combine to drop the temperature to a record low of 21 below zero at Grand Rapids.

1912: Muskegon sets their all-time record low for the month of January at 21 degrees below zero during their coldest month on record.

1918: Record cold is experienced at Lansing with 18 degrees below zero and Grand Rapids at 14 below during one of the coldest winters on record.

1952: Dense fog with visibility near zero leads to a number of auto accidents across southwest Lower Michigan. The fog persists for three days from the 12th to the 14th.

1979: A massive storm dumps heavy snow across southern Lower Michigan. Temperatures in the teens and strong winds lead to heavy drifting of the powdery snow, causing travel to come to a halt. The snow, at times falling at more than an inch an hour, caused power outages due to broken tree limbs. Snow accumulations were up to 3 feet, causing some roofs to collapse. South Haven had 21 inches of new snow added to 24 inches already on the ground. Grand Rapids saw 13.5 inches of snow and 2 to 4 foot drifts with wind gusts between 25 and 35 miles an hour.

1893: A long siege of arctic cold drops the temperature below zero for 15 out of the first 19 days of January at Lansing. This is the coldest day of the month with a low of 16 below zero.

1932: Grand Rapids is in the midst of a stretch of six days with temperatures above freezing during the warmest January on record.

2005: Two days of heavy rain and high temperatures in the 50s is followed by a stretch of arctic cold, causing massive ice jams to form on the Grand River. The ice jams result in devastating flooding of Robinson Township in Ottawa County. Flooding also occurs on stretches of the Muskegon, Thornapple, Flat and Kalamazoo rivers.

2015: Arctic air and clear skies allow temperatures to drop well below zero. Grand Rapids sets a record low for the second consecutive day with a low of 13 degrees below zero.

1984: Lansing plunges to 25 below zero and Grand Rapids falls to 14 below during a stretch of arctic cold. Temperatures are below zero for eight straight days at Lansing between the 14th and the 21st.

1949: Temperatures reach record highs in the mid to upper 50s for the second consecutive day across southwest Lower Michigan.

1972: The arctic air holds on for one more morning of record lows as Grand Rapids falls to 16 below zero and Muskegon tumbles to 11 below.

Still have the ground coverd with snow in my area with the les smokefall this year in inches that is I have had more fun outside then last winter crazzy.. Rocky keep the snow maps a coming it sure brings out the best in the blog lately lol…..INDY

Yes and winter is about ready to explode! Rock n roll will never die!

Even the 5 day snow map is looking great!

General rule is to cut those totals in half, so I am very good with around 2 inches of snow in my area over the next 5 days!! Keep that below average snowfall coming!

Great news! Still 66 days of winter to go! Plenty of cold and snow will be rocking!

I love this winter!! Above normal temps, 7.5 total inches of snow!! I wish every winter was like this!! These past two winters have been fantastic and only 2 months of winter left!

Another day with below normal snowfall. 30 + inches in the negative. This is turning out to be an awesome winter !! Spring just around the corner !! Zzzzzz to winter. I love it !!

41 degrees, partly sunny, and virtually no snow on the ground. Hard to believe it’s mid January and we are halfway through Winter already. 44 days down, only 46 days left till met Spring. If our current pace of snowfall would continue, we are looking at a Winter with 14 inches of snow.

43 here with lots of sunshine. I had my annual eye exam. I forgot to take my sunglasses in with me. Instant headache when I came back out. It was like a welder’s flash.

The long range snow maps are trending the right direction! It could get wild around here!

Wow it’s amazing Muskegon had over 100 inches of snow in just a single month. Definitely way different than this year.

I was a teenager then, but I certainly do not recall that. That is unreal!

The winter storm track is still heading right at us! Get ready for a back loaded winter !

Bring it on! The snow chances still look great!

LOL “On-and-off snow showers stick around into early next week. Accumulations with each round look light, from a dusting to 1-2″ at a time.” NWS Grand Rapids

Dont forget the rain will take care of most of the dirty snow tomorrow. 😉

Can’t believe it’s been 16 years already. That was horrific.

NWS downgraded the weekend snow once again today. Get people all hyped up and then slowly reduce expectations day by day seems to be the name of the game this winter.

I would love to have some of that historical cold and snow mentioned above, but it continues to allude us, despite the fact that we are headed into what is typically the coldest week of the year?