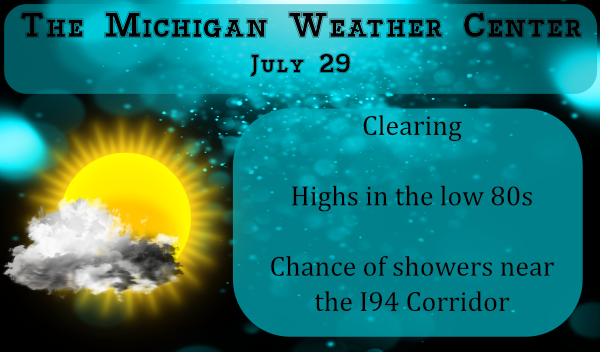 We have a dry and warm start to this morning.  At 5 am we have 71° with rain to the south of Allegan County.  The rain has stayed to the north and south of our area.  Showers will diminish this morning, then skies will gradually clear through the afternoon. We may see a few additional showers or storms near the I-94 corridor later in the day.  After today we will be coming into a dry spell which will last into next week.  I am seeing the temp forecasts for next week in the mid to upper 70s which will be a welcome change and something we haven’t seen in quite a while.

1896: A tornado struck a few miles northeast of Battle Creek, seriously injuring one person as it destroyed a farm home and barns in Pennfield Township, Calhoun County.

1973: A tornado damaged a mobile home and some farm wagons two miles southeast of Clare, Michigan.

1894: The temperature hit 100 degrees at Lansing during the second record heatwave of the month, the first of which occurred a week earlier when Lansing set its all-time record of 102 degrees

1955: Temperatures reached the upper 90s for the second day in a row across West Michigan in one of the hottest months on record. At Grand Rapids, 15 days had high temperatures above 90 degrees during July 1955.

2002: A severe weather outbreak produces tornado and downburst wind damage. A tornado with top winds around 80 mph touched down about one mile east of Augusta in Kalamazoo County. The tornado passed through Fort Custer in western Calhoun County, about one mile northwest of the Battle Creek airport. The damage path was approximately 800 yards wide and path length was 3 miles long. Extensive tree damage occurred in the Fort Custer area and the roof was blown off a firing range shelter. After the tornado ended, downburst damage continued for several more miles in Calhoun County. A severe thunderstorm struck a campground and mobile home park along Swan Lake in southern Allegan County. Trees were blown down onto mobile homes and small boats were blown out of the lake. Two minor injuries occurred. Top winds with the downburst were estimated at 70 mph.

1959: A steady rain brought relief from drought conditions across West Michigan. Dry weather began in April, resulting in water rationing in Grand Rapids by the middle of July.

1976: A tornado injures five people northwest of Grand Rapids as it damages a warehouse.

1996: A weak, short-lived tornado damaged a pole barn near Evart on Osceola County.

1916: Temperatures soared to record highs as a ten day heat wave reached its peak. The 102 degrees at Lansing would tie the record for the hottest day ever there. Grand Rapids hit 103 degrees as part of a record string of four consecutive days of 100 degrees or higher. Even the Lake Michigan shore was baking, with Muskegon hitting 95 degrees.

2008: A tornado struck about three miles north of Clare at 3:17 a.m. A barn collapsed and the roof of a carport was blown into a stand of trees. Several other trees were either snapped off or uprooted.

1883: Very heavy rains during June and July cause the Grand River to rise to unusually high summer levels. Lumber companies use the high water to float logs to a log boom upstream of Grand Rapids. The logs broke loose and crashed into the Detroit, Grand Haven & Milwaukee Railroad bridge creating a jam estimated at thirty-feet deep and seven-miles long. Sections of Grand Rapids were flooded by backwater. Eventually the bridge gave way and several bridges downstream were damaged by the cascading logs.

1917: A heat wave produced record highs in the upper 90s as July ended, with Grand Rapids hitting 98 degrees and Lansing 96 degrees. There were also record high minimum temperatures of 79 degrees at Grand Rapids and 74 at Lansing.

1886: A tornado moves from northern Kalamazoo County into Barry County, damaging several farms in and near Hickory Corners.

1947: What turns out to be the hottest August on record starts off on a decidedly cool note with record lows of 48 degrees at Grand Rapids and 43 degrees at Muskegon.

2002: A tornado struck north of Tustin in Osceola County. The tornado left a damage path six miles long, with dozens of large trees down and some roof damage to homes. One house had its attached garage destroyed. A weaker tornado also hit near Grant in Newaygo County, toppling a tree.

Middle of May we had frost frezze warnings for Grand Rapids not to long ago crazy…INDY..

Hey Slim, when you get time could you look up the top 5 or 10 warmest July’s in the past 20 or 30 years? I think you posted something similar recently but I couldn’t find it. Obviously 2012 is #1, but just curious how this year stacks up against others in the past 30 or so years.

Oh well…Summer in the Southern Arctuc is simply too short. It sure was a good one this year, glad it stopped by for a few weeks. Looking forward to a repeat next year. Let’s not be surprised by the routine endless collapse in conditions, and temps. Coats, Furnace, Snowblower test…you know the drill.

8 months of the furnace ended 2 months ago! crazzy in a just about a month it’s September already ….INDY

You were running your furnace at Christmas time and in January when temps were in the 60’s?? That’s just ridiculous.

The shtick is up! We’ve been warm 4 years in a row!

Serious heat out west. Triple digits temps not only for the desert southwest, but also Washington and Oregon.

Ah the usual “did we see our last 90 degree day” from Indy while it’s still July. Right on schedule LOL

Ha, like 2 years ago and then we had a week of upper 90’s the last week of September.

Phew, July has been very warm. Only 3 below average days all month!

While winter, spring, and fall in Michigan see lots of variation compared to the temperature averages, the summer months are almost always closer to the mean. In fact, if we finish over +3 degrees above average in July, it will be the warmest summer month compared to average since at least 2015 (as far back as online records go).

We got hosed on the rain again. Decent amounts of rain fell just to our north.

“Missed it by that much.”

0.48” of rain here overnight with some decent lightening. Another warm and very humid morning again today with the dew point at 70. This has been a long and uncomfortable month!

The mean at GRR so far this July is 76.0. And that is good for a departure of +3.5. So while not all that hot compared for much of the US it is warmer then average for our area.
Slim

Like the past couple years, it seems the humidity has been much higher than years past. Even if it’s “only” 85 out, a dew point in the mid 70’s is intolerable.

Will be the hottest summer month in many years (relative to average) if we finish near here. Unbelievable.

With a current mean of 76, what’s not correct about my statement?

That this will be the “warmest summer month in many years”. It may or may not break last year and is well behind 2012. So while the current mean of 76.0 is correct it may be warmer then last year but no where near as hot as 2012 so it will not be the hottest summer month on many years.
Slim

LOL Exactly. It’s been many summers since the summer of 2012. That’s impressive in my book.

Maybe 8 years is a long time in your book. We will know on Saturday if this year ended up warmer then just last year.
Slim

You say many, I say several.
Slim

But then again this summer is nothing compared to 2012 your so right again Slim ….INDY