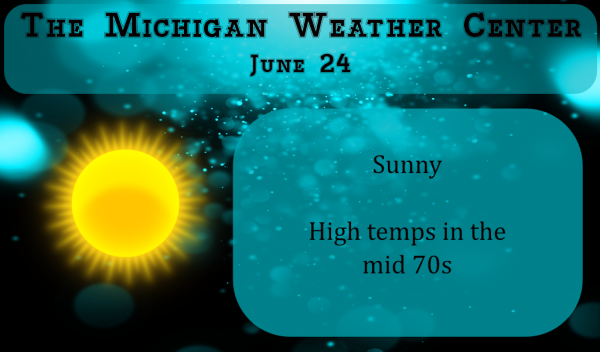 We have another sunny day instore with comfortable temps and humidity.  Our next chance of rain comes later Friday into Saturday with perhaps a storm mixed in for good measure.

1988: The hot summer of 1988 got off to a sizzling start with record highs of 98 degrees at Grand Rapids and Lansing.

1996: A tornado struck from near Weidman to west of Rosebush in Isabella County. Three homes were damaged and four barns destroyed, along with several other outbuildings. Several silos and farm machinery were damaged. Other tornadoes hit near Frankenmuth and Imlay City.

1957: At least four weak tornadoes hit southern Lower Michigan. At Hudsonville in Ottawa County, damage is down to a warehouse. A barn is destroyed near Pinconning in Bay County. Several barns are damaged or destroyed in Berrien and Cass Counties. Trees are taken down at Dumont Lake in Allegan County.

2015: Severe thunderstorms with brief tornadoes and downbursts strike across Lower Michigan. Portland, Michigan is hit by a small tornado with winds estimated over 100 mph.

1870: An extreme heat wave began and lasted through the end of June. Temperatures in the mid and upper 90s prevailed most of that time. Lansing set their all time high for June of 99 degrees on the 25th.

1998: A severe thunderstorm produced hail up to 3 inches in diameter and two tornadoes as it tracked across Eaton and Jackson Counties. The first tornado touched down just east of Eaton Rapids and downed trees and power lines. The second tornado hit Layton Corners in north central Jackson County. This tornado did about half a million dollars in damage as it did minor damage to about a dozen homes.

1969: A tornado begins near Cedar Springs in Kent County and moves east for seven miles, damaging a store and destroying a barn, chicken coop and 14 camper trailers.

1956: A tornado struck Gratiot County near Perrinton. Two homes and five barns were destroyed and fifty other buildings were damaged. Two people were injured.

1875: Tornadoes struck Detroit and Jackson during the late afternoon and early evening. The Detroit tornado killed two people and injured 25 others.

1914: A tornado struck Gratiot County, destroying several buildings as it moved from North Star to three miles north of Edgewood. A barn door was carried nearly a mile.

1944: A three-day heatwave peaked with high temperatures of 97 degrees in Grand Rapids and 93 degrees at Lansing.

1968: Cool and cloudy weather prevailed with high temperatures only in the upper 50s to lower 60s.

It sure has been beautiful the last couple of days! Great outdoors weather. I have 8 tomatoes growing. I seem to be in charge of the garden for the time being. Memorial weekend my husband spiked a fever and 2 days later he was in the hospital for 8 days with cellulitis. He came home right before our 50th anniversary. Given what was going on we had a nice family celebration at home. Time flies!! At least it seems like it.

I’m happy that your hubby is better, and Happy Anniversary!

Congrats on your 50 anniversary.
Slim

Currently 67* at 830pm out at thee YARDofBRICKS NE of GR no fans tonight love it ….Have a super night INDY

Nice day today. It’s been a nice month so far, with only seven days below average in temperature.

The afternoon NWS forecast discussion is talking about the potential for severe weather here Friday evening/night.

CPC looking HOT. Get ready for the next heat wave!

Lol next heat wave I’m sorry 80’s with a 90 or to are not standard heat waves ….It’s beautiful outside though another below average day on hand ..INDY

Looks like starting next Wednesday thru Sunday will be 90 degrees. That is hot!! It has been nice lately to have the windows open and the cool breeze.

There are indications that there is a good chance that July could be warmer than average. This would happen as the west cools down some. In fact it could get real hot to our north (well to our north) near the 4th as some of the same conditions that caused the heat in parts of Russia move into Canada. We shall see.
Slim

Had a low of 60 degrees this morning. Average low is 60 degrees. Exactly average for the day.

It currently partly cloudy and 62 here. So far the month of June here at Grand Rapids has a mean of 68.7 that is good for a departure of +1.2. the airport has reported 2.03″ of rain fall so far this month and I have recorded 1.88″ The high for the month so far is 93 and the low for the month is 42.
Slim

Currently 56* degrees out at thee YARDofBRICKS NE of GR great sleeping night no fans attached loving the Fall feel in the air let’s keep it going with no long heat waves September is spashing in fast ….Have a super below average hump day MV’s best ….INDYCOLD!!!!