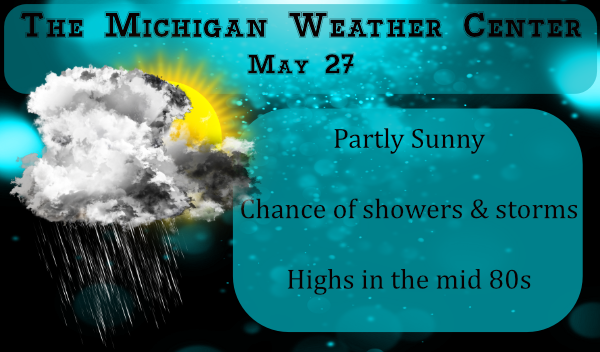 First, a quick reminder that this is not a political site so let’s keep it that way.

1890: One person was injured as a tornado destroyed one home and a dozen barns northeast of Ithaca in Gratiot County.

1925: Lansing records its latest snow on record as snowflakes fall there with a low temperature of 32 and a high of 47 degrees.

1992: Widespread freezing temperatures do heavy damage to the fruit crop across southwest Lower Michigan. Record lows for today include the 29 degrees at Lansing, 31 at Grand Rapids and 32 at Muskegon.

2006: Two weak tornadoes caused no damage as they briefly spun up between Beebe and Breckenridge in Gratiot County.

1961: Snow flurries are observed across Lower Michigan as record cold air moves in. Temperatures fall well below freezing the next morning, wiping out much of the fruit crop.

1912: A tornado destroys barns and kills livestock near East Leroy in Calhoun County.

1960: Several farm buildings were damaged or destroyed by a tornado four miles east of Ionia.

1973: A tornado destroyed a barn and silo near Saranac in Ionia County. Another tornado did minor damage near Gun Lake in Barry County.

1955: A series of tornadoes put down an intermittent damage path more than 60 miles long from near Schoolcraft in Kalamazoo County to east of Grand Ledge in Eaton County. One person was injured northwest of Charlotte as a barn was destroyed. Two homes were unroofed and total damage was estimated at 150,000 dollars.

1991: A tornado damaged homes and destroyed outbuildings near Hart in Oceana County.

1895: The second heat wave of the month gets underway with record highs of 94 degrees at Grand Rapids and Lansing.

1947: Muskegon records its latest snow on record as some wet snowflakes mix in with a cold rain. The high temperature for the day is only 47 degrees after a low of 35.

1972: A tornado damaged a building under construction five miles west of Jackson.

1989: A tornado struck Van Buren County, moving from east of South Haven to south of Pearl. Several grain elevators were destroyed and windows were blown out of buildings.

Not as much rain here today as yesterday, only 0.16”. Great rainbow though!

72* degrees out at thee YARDofBRICKS NE of GR feels great I could only imagine the comments if it still was In the 80’s right now must be a heat thing lol….The rain gauge shows 1 45 inches not good for the Grand River .. What a nice storm we just got having …INDY

Yes nice Thunderstorm over thee YARDofBRICKS NE of GR thank you the temp has dropped .INDY

At 4pm Grand Rapids Michigan 87* degrees it’s getting late in the afternoon probably not going to hit 90* degrees today and far from any records that’s fine with me mid 80’s and rain tomorrow then a big cool down for the weekends ahhhhh good riddance 90* degrees love it. …INDY

According to the CPC this weekends cool down should be short. As the next 2 weeks look to be warmer than average. Also of note it that it is getting very hot in the SW with highs of 110 or better over the weekend.
Slim

And it can stay there Slim ..My truck is reading 86* degrees now but always 6 degrees cooler lol…INDY

Since it appears some either do not quite understand how the heat index works or they think it’s not real, here’s a good link to help understand:

Love what wood tv 8 said today at noon temps will struggle to make it in the 70’s this weekend relief is on its way ahhhh!! INDY..

After 10+ days of above average temps, we may get two days slightly below average. WOOD then has 80’s again by Wednesday. CPC is all red too. Get ready!

Heat indexes in the mid 90’s again, closing in on 100. This feels “much cooler”? Doesn’t feel much worse than this very often in this area.

Some people just like to stir the pot here I think.

The “weather” at your place is always 3-5 degrees cooler and about 6″ more snow. Hmmm

Another steamer of a day. With the dew point at 70, we have a heat index of 90 again. I guess that feels better than yesterday’s heat index of 94?? Yuck.

Did you get any rain this morning? I recorded 0.43″ of rain. The sky is now mostly sunny and the temperature here is now up to 86 with a DP of 75. According to my weather station that gives a heat index of 94. I just put the numbers in the NOAA heat index calculator and came up with a heat index of 95 so the heat index is around 95 here in my area.
Slim

Only about a tenth of an inch. Rained hard for about 5 minutes, just enough to make it feel even more humid outside.

Historical day!!! We are watching!!! The astronaunts just said goodbye to their families…

I just got back from a short 30 minute walk. I left with cloudy skies but this sun came out and it is now warm and very humid. The current temperature is 84 with a DP of 75. According to my weather station that is good for a heat index of 90.
Slim

Had 0.43″ of rain here. With mostly cloudy skies the current temperature here is 76 with a DP of 70.
Slim

Currently we have 70* degrees out at thee YARDofBRICKS NE of GR and we are caped with clouds I’m thinking it will be hard to make 90* degrees today that’s fine with me heck we may not see 90* or better again to mid June or July let’s hope Sundays hi of 68* degrees looks fantastic with lows in the 40’s more fire weather have a good hump day ..INDY..

Welcome to day 8 in our warm streak. Today will likely be GR’s 4th double digit above average day in a row. Yesterday was +15 above average. May departure is down to only -2.7 degrees and dropping.

90’s and record heat in May! I love long summers!

Yesterday West Michigan had a record high tied at Grand Rapid 90 and a new record high set at Muskegon also 90. The average 1st 90 day at Grand Rapids is June 18 and at Muskegon it is July 3rd And it is the earliest first 90° at both locations since 2012. It looks like the official overnight low at GRR will be 67 if that holds until midnight it will be the 7th warmest minimum for any May 27th The current temperature here at my house is 70 with a DP of 63.
Slim

Lots of records in Lower Michigan! I also saw Sault Ste Marie hit 90 (record high), Traverse City hit 91 (record high), and Flint hit 92 (record high). Funny you said this just a few days ago when I was talking about the big warm up: “low to mid 80’s in late May that is NOT unusual.”

Thanks for the no politics reminder.

I will 2nd that
Slim

Good luck with Andy around!

I hope Rocky gets the message and stops posting silly political things!

Yep, Rocky really needs to stop with the political posting!

Agree, lets move on. I posted a couple days ago myself. But, this is a weather blog. Lets keep it that way. 🙂