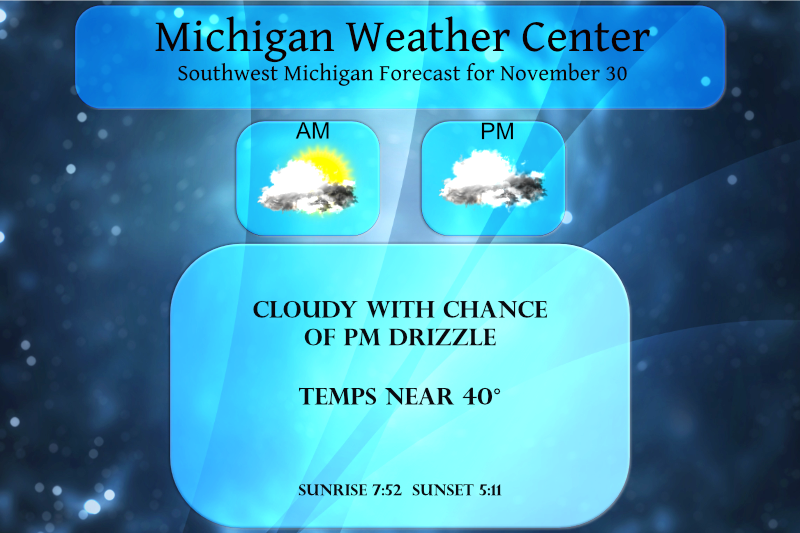 Temps will increase into the 40s for most of the rest of the week for daytime highs with precipitation chances in the 20 to 30 percentile.  Today will be mostly cloudy with patches of drizzle possible this afternoon when temperatures should be above freezing. Highs will reach the mid-30s to mid-40s today. Temperatures will be significantly warmer for the middle of the week, with highs warming into the 40s Wednesday, and the mid-40s to low 50s Thursday.  We are now looking at the possibility of a snowstorm coming in late Sunday (see the end of forecast Discussion).

About 1/2 the snow melted today when the sun made an appearance. The local met showed the temps for next week: 30s-40s.

Average high this time of year is about 40 degrees.

Get ready for a possible snowstorm the beginning of next week and then a wintry, stormy pattern after that! Rock n roll will never die!

Im at 11 inches of snow now for the young season out in my hood down to 79 inches togo on my 90 inches not bad ….We have plenty morre snow on the way off to a dandy of a start or should I say snowy….InDY…

It is going to be wild winter! Make sure your snowblower is ready or set up a plow service this year! Bring it!

the GR monthly snow total is up to 9.7 inches! Wow! This well above normal and way above last year, so no this winter is not starting like last year. In fact it is totally different! Keep it rocking!

What a storm! West Mi got pounded with a November snowstorm yesterday and it looks great outside right now! Incredible!

And now just in past 45 minutes or so, it has become very foggy.

You know it! At least 2 people knew about the below normal temps and above normal snowfall!

Here at my house (and officially at GRR) there was 3.5″ of snow fall yesterday afternoon into the evening. There is a total of 3.5″ of snow on the ground here. The overnight low here at my house was 25 and at this time there are some lake effect clouds and it is now 26 here.
Slim