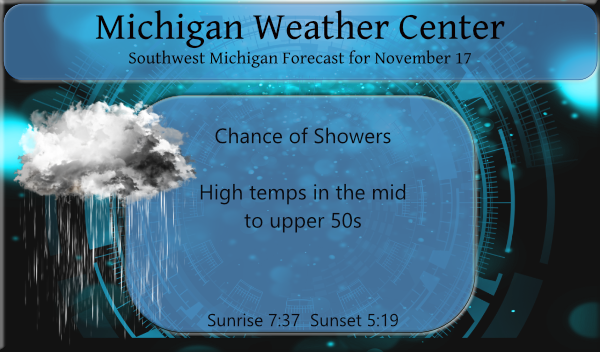 Yesterday was a pleasant day by November standards in that there was no rain and the sun was making its brief late fall appearance.  We currently have 55˜ at 6:30 this morning.  Yesterday’s high was 47° and a low of 33°.

Clouds return today with rain in the forecast – precipitation amounts between a quarter and half of an inch are possible.

For those of you wondering about the weather for Thanksgiving week, this is the latest from the NWS.

1908: Heavy snow falls across western Lower Michigan with a total of 16 inches at Muskegon, a record total for any November day.

1933: Michigan is in the grip of a four-day cold snap. The low of 10 degrees at Grand Rapids only rise to 18 degrees during the afternoon as lake effect snow showers swirl around and an icy northwest wind makes it feel even colder.

1959: A vast area of arctic high pressure brings record cold to much of the continental United States. High temperatures only reach the teens across much of Lower Michigan followed by record lows in the single digits on the morning of the 17th.

1989: Grand Rapids picks up seven inches of snow, bringing accumulations during a three-day storm to over a foot.

2013: A squall line of severe thunderstorms moved through Lower Michigan during the afternoon bringing widespread wind damage. Hundreds of trees were knocked down and thousands lost power from downbursts and brief tornadoes along the line of storms.

2014: Arctic air prevails with high temperatures in the teens and heavy lake effect snow. Nearly 10 inches of snow falls at Grand Rapids, contributing to a record November total of 31 inches.

1930: Record late-season warmth was across Lower Michigan with highs of 74 degrees at Grand Rapids and Lansing.

2000: An intense lake effect snow squall dropped almost a foot of snow on Grand Rapids, setting a record for the most snow on a November day there.

On November 15, 2018, a low-pressure system brought a rain and snow mix to far eastern Southeast Michigan while all snow occurred elsewhere. Snowfall totals of around 4.5 inches were observed in the Tri-Cities area while a general 1 to 3 inches fell elsewhere.

On November 15, 2005, a third powerful storm hit the area in just a week and a half during November 2005, leading to yet another round of strong winds. The cold front pushed through during the evening, leading to another period of strong winds, occurring through the early morning hours of November 16. Southwest winds were sustained at 25 to 35 mph, gusting to around 50 mph, with the exception of Huron County, where wind gusts estimated near 60 mph. Trees were downed along the lakeshore from Caseville to Grindstone City. Heavy rains also occurred across the region, and the combination of winds and rain led to property damage estimated at 7.2 million dollars. One man was killed (indirect) and another injured (indirect) in a vehicle collision caused by a tree that had fallen into the road in Northern Oakland County due to the strong gusty winds.

Also on November 15, 1997, low pressure tracked across Michigan bringing light snow fell across most of Southern Lower Michigan with accumulations of 1 to 4 inches. However, cold north and northeast winds off of the relatively warmer waters of Lake Huron enhanced the snowfall amounts in eastern Sanilac and northeast St. Clair Counties where accumulations were generally 4 to 8 inches. Port Sanilac received 8 inches of snowfall, but Sheriff Departments reported localized areas of eastern Sanilac county received up to 12 inches.

On November 16, 1989, a snowstorm hit Flint and Saginaw and it came to an end during the early part of November 17. Saginaw received 8.0 inches of snow while Flint recorded 7.7 inches.

Also on November 16, 1932, a snowstorm that started late in the day on November 15 dumped 9.0 inches of snow on Detroit. This is the heaviest snowstorm in the month of November for Detroit.

On November 17, 2013, a powerful low-pressure system strengthened and tracked northeast across the western Great Lakes. As the cold front swept through the area, winds gusted to 50 to 60 mph during the overnight hours with a peak gust of 70 mph observed at Ypsilanti. The winds produced widespread damage and caused hundreds of thousands of power outages across Southeast Michigan.

On November 18, 2016, unusual late-season Autumn warmth shattered record highs for the date across the region. Detroit reached 73 degrees (breaking the previous record of 69 from 1941) while Flint and Saginaw both reached 71. Their previous records were 69 (1941) and 68 (1975) respectively.

Wow, every night this week well into next week lows freezing or below! Incredible cold!

Rainy morning. Feels like an early spring day today… I even have a few allergies, probably from mold

Get ready for the cold front!

The overnight low here was 41 but the temperature has been going up all night and now it is 53 here at my house.
Slim