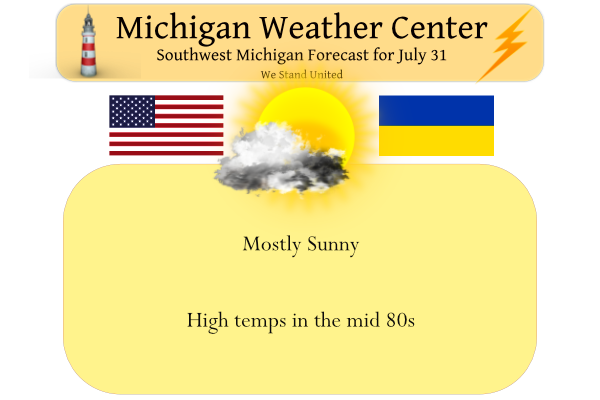 We close out the month of July today meaning met summer will be two-thirds over. Sunrise today was at 6:35 am and it sets at 9:05 pm.  In Otsego, the rainfall for July is 5.40 inches which is more than an inch above normal.  Our summer total is at 8.02 inches.

The mostly sunny and warm conditions will continue today. Tonight clouds will increase as a cold front approaches from the west. Showers and thunderstorms will arrive around daybreak for the lakeshore communities. These showers will then move inland through Monday morning. The front will exit the area during the afternoon.  Uncomfortable heat and humidity will build in on Wednesday with temps in the 90s.

We are starting to eat fresh tomatoes, green onions, and peppers from our garden.  The cucumbers are coming along nicely.  There is nothing tastier than fresh tomatoes.  I have had gardens for over 40 years, my mom always had a garden and my grandfather planted nearly two acres of every vegetable you can think of.

Michael,
We have been enjoying some veggies from our garden too. Green beans, tomatoes, and peas. Our honey rock melons and white pumpkins are coming along. You are right there is nothing like veggies from the garden.
My gparents had huge garden growing up too. My Gpa always planted sweet corn and sole it by the roadside. I miss comparing my garden to my dad this summer. He passed earlier this year. It was always our “thing”.

Such a beautiful Summer sofar as Slim says pretty average no real heat issues I agree we just had a cool late Fall like week in Boyne only hit the pool once and I believe that was way back on Monday before the cool air really set in!! Temp in the low 70’s and some nights in the mid 40’s low 50’s just a perfect late July week!! Now I have been noticing the NWS is coming down on the temperatures this week looks like its not going to get as hot as some predicted typical for August around here… Read more »

Next weeks forecast is looking better. Temps have been lowered and rain chances look a little better. There are parts of our area that still desperately need rain despite the heavy rain event on the 23rd.

With July coming to a close it can be said that the first two months of summer have been almost average. June came in with a mean of 69.2 that is a departure of +0.3 and with just today to go July has a mean of 72.8 and that is the 30 year average. So all in all a very average summer so far here at Grand Rapids.
Slim

And how many seemingly perfect weekends? I’m sitting out back enjoying my coffee and it is picture perfect.

Almost all of them!