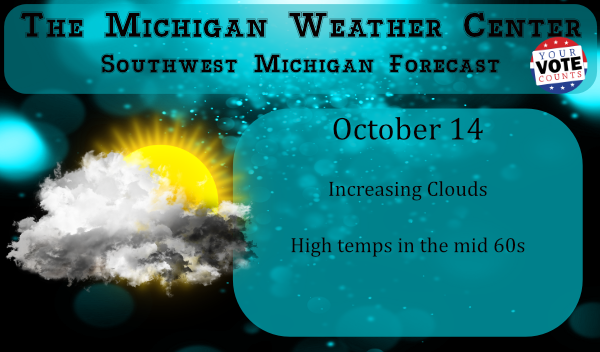 We have clear skies this morning once again with a temp of 38° in Otsego and 41° in both Kalamazoo and Grand Rapids.  We can expect temps to rise into the mid-60s today in southern Michigan for one more relatively warm day before the bottom drops out and temps dip into the 50s for the rest of the week.

Winds will be picking up today with gale warnings on Lake Michigan – with waves building to 2 to 5 feet this afternoon and 4 to 8 feet tonight into Thursday.  On shore we could see winds gusting to 30 mph.

1912: A late evening tornado hit Gratiot County. Five farms sustained damage along a five mile-long path. An elderly woman was killed and her son injured as their home was blown apart southwest of Alma.

2006: A record early season snowstorm brings up to eight inches of snow to southwest Lower Michigan. Tree damage and power outages were extensive around Hastings in Barry County as the wet, heavy snow clings to the tree branches, which still had leaves on them.

1975: Record warmth occurred with highs in the 80s. The 87 degrees at Grand Rapids was a record for the date and the highest temperature for so late in the season.

1954: A tornado destroyed an empty schoolhouse at Ashley in Gratiot County. It also took the roof off one house and a porch off of another.

1899: Muskegon hits 86 degrees for their highest October temperature on record.

1944: Cold air is firmly entrenched in Lower Michigan with record lows of 23 degrees at Grand Rapids and 25 degrees at Muskegon.

1943: A snowstorm drops an inch or two of slushy snow across southwest Lower Michigan. The high temperature at Grand Rapids and Lansing are only 39 degrees.

1952: After a frosty morning with lows in the 20s, snowflakes fly across western Lower Michigan. An inch of snow accumulates at Muskegon.

2002: Cold weather arrives across western Lower Michigan with high temperatures only around 40 degrees and periods of wet snow mixing in with cold rain.

Get ready for the big cold front! October cold fronts = one more step towards winter and a snowstorm! Incredible!

At the current time it is cloudy and 56 here.
Slim

The last 7 out of 8 days have been above average! Perhaps we’ll squeak out one more today.

Had a overnight low of 39* out at thee YARDofBRICKS NE of GR my wife just said to me It’s kind of cold in the house as the furnace kicked on she said nevermind I said get used to the furnace on it will probably won’t shut off now till sometime in May lol….On that thought get ready for a big cold down below average temperatures probably the rest of October no dought let’s finished this month below on a cold one Have a super Wednesday INDY …

In looking at the above history there has been snow and there have been days as warm as 87. I had a chance last night to take a look at Mars as it was the brightest object in the sky last night. The overnight low here at my house was 38 and the current temperature is now up to 40.
Slim