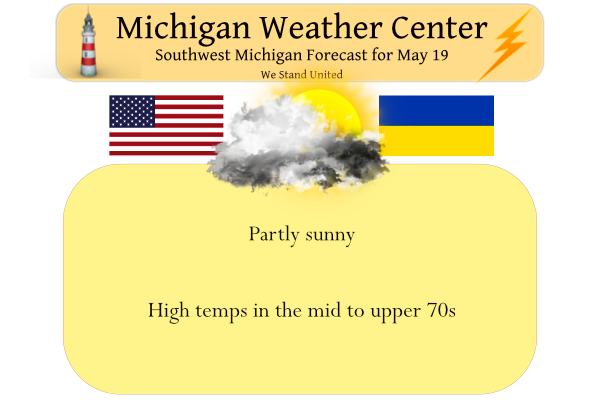 We will be entering a more active weather pattern with chances of rain and storms through Sunday morning.  Skies will become partly sunny today. An isolated shower or thunderstorm is possible. It will be warming up with high temperatures in the 70s closing in on 80° along and south of the I94 corridor.  Below are the SPC guesses for Friday/Saturday.

So much on cutting the grass Saturday its supposed to rain now …Such a wet pattern we are in. …INDY

Get ready for the big chill! Incredible!

The Slight Risk area seems to keep shrinking on about every update. The biggest change was the addition of the 5% tornado risk for our northern and northeastern counties up into the northern lower.

From SPC: “If thunderstorms can form, they would pose a threat for all severe hazards across this region, as both instability and deep-layer shear appear favorable for supercells.”

Get ready for the big cool down! It starts Saturday and lasts many days! Wow!

LOL You said the same thing for our tiny 2 day cool down. Enjoy the huge warm up the next few days!

Thanks for pointing out that I was 100% correct about the cool down and the next one will last more than 2 days! Incredible!

Rocky there are hints that it could warm up by the end of May and into the start of June. It looks like it could stay on the wet side so it could also become rather humid.
Slim

A little warmth is good, but the high dew points is horrendous! Give me sun and low 70’s and low humidity!

After 8 warm days in a row, our two day cool down is over. 77 degrees today and 85 tomorrow!

Average high is only 71 degrees today.

So it appears that cool temps forecasted for next week will only be a few degrees below average. I am enjoying this spring. We’ve had a little bit of everything, weather-wise. My lawn looks as good as ever.

Yes I have noticed that the end of May has been getting warmer. Makes sense that the most recent 15 years have trended upward.