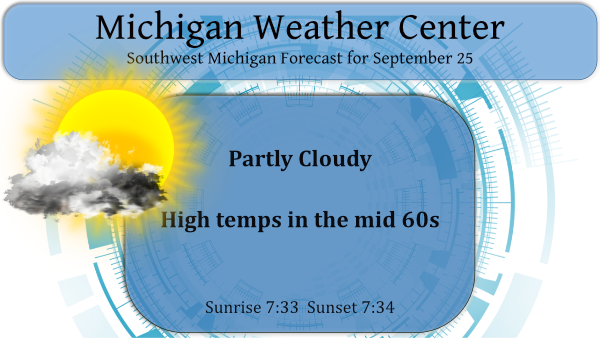 As we end the month here is some odds and ends on the month.

September, in Old England, was called Haervest-monath (Harvest Month). This is the time to gather up the rest of the harvest and prepare for the winter months. September’s name comes from the Latin word septem, meaning “seven.” This month had originally been the seventh month of the early Roman calendar.

And here is some September folklore.

Just in case you were wondering September 1st this year had 63% of sunshine.

We had .31 of an inch of rain overnight bringing us to 2.16 inches for the month. Our overnight low temp was 52. Yesterday’s high/low was 73/45.5
We have the Creative Arts Festival in Otsego today – come on down and join us –

Another storm watch issued for Sunday. Geomagnetic storm that is:

Thanks Slim! It does feel like September’s have definitely become warmer in more recent times, your stats confirm that. I like the married in September folklore as yesterday was our anniversary!

Happy Anniversary to you and the Mrs!