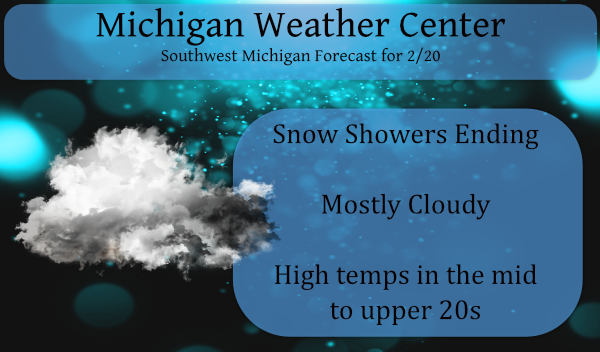 From time to time there has been talk of the trend for “short” winters lately. In looking at past history there have been very few winters where it has been cold from the start to the end. That can be said for most summers as well as few have been “hot” from start to the end as well. In looking at past winters and particularly at past Februarys there have been 14 years when the temperature has shot up in the 60’s There have been a additional 53 February’s when it has reached 50 or better for a total of 67 years when it has gotten to 50 or better in February. Of course, it has not reached 70 here in Grand Rapids in February. The earliest first day of 70 or better is March 3rd and that happened in 1983. Here are some of the warmest days in February at Grand Rapids.

We are now entering the last full week of meteorological winter and while most of this winter has been mild in reality there have not been all that many warm winter days. Did you know that as of today the warmest it has been this meteorological winter has been 53 and since Christmas the highest it has been is just 41. And so far this February the warmest it has been is just 37. On average the warmest day in December is 53 January 48 and February 50. The mean so far this meteorological winter at Grand Rapids this winter is now at 25.5° The average mean for the 3 months is 25.6° The coldest low this winter at Grand Rapids will be -12 and the annual average lowest reading is -7. The deepest snow depth looks to be 14” that average deepest snow depth at Grand Rapids is 11” Now it is true that this winter looks to end up well below average in the snow fall department and it looks to end up well below that average winter in days of 1” or more of snow cover at this time this year is at 46 days. Average at this date should be 54. Note for the year the average number of days with at least 1” of snow cover at Grand Rapids is 70.

It was another of many great winter days! Incredible weather and a great winter for outdoor sports! Fantastic!

Thanks Slim! With the average # of days with at least 1″ of snow cover at 70, this Winter will be looked back at as one that had almost no snow cover until the end of January.

Wait a minute more snow ?? Wow I believe the phase snow drought is a thing of past DDDDDD….Back loaded Winter 2021 of fun who knew ??? INDY

I picked up just over a inch of new snow overnight and now have 13.5″ on the ground here. Officially at the airport they reported 0.6″ of snow fall for yesterday and for the season they now report 42.9″ that is still 17.6″ below the 30 year average as of this date. The official snow depth at GRR is 12″ At this time I have clear skies and a temperature of 13.
Slim

We had 4 inches of snowfall, the sun is now coming out. We have had 19.8 inches for the month and 39 inches for the season – another inch will put us over last year’s snowfall totals.

What? More snow than last year! Incredible, but this winter has been awesome! Skiing for weeks on end!

What a great winter weekend! Perfect! Get outside people! Skiing here I come baby!