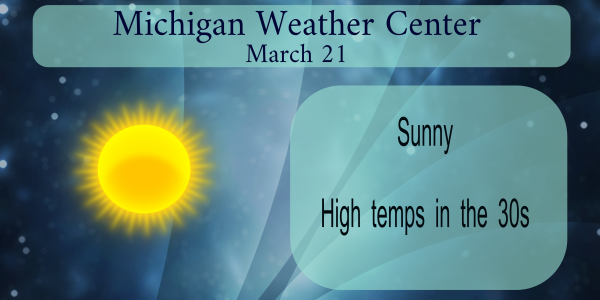 With it now officially spring I thought I would look at some past years where March was not all that spring like. First off March 1965. The winter of 1964/65 started off with a colder than average December. While colder than average December 1964 had less snow than average with just 13.4” of snow. January was colder than average (-1.9) and there was 24.1” of snow. February was cold (-3.0) and there was 16.7” of snow. March 1965 started out typically with cold highs in the upper 30’s But on the 17th things turned colder and snowier and starting on March 19th there were 3 days with highs just in the teens and between March 17th and the 25th highs stayed below 32 and in that time a total of 26.5” of snow fell. That 26.9” is more snow then has fallen in any other March in recorded history at Grand Rapids. And the 36.0” is still the record for any March at Grand Rapids. The warmest for the whole month was just 43 and that happened on the 1st and the low for the month was a cold -2 on the 24th. That April also started cold and there was still more snow as 3.9” fell on April 1st Then on the 11th there was the big palm Sunday tornado out break.

While March 1965 was snowy it was not the coldest that happen in March of 1960 with a mean temperature of 23.9. BY Comparison February was the coldest month this winter with a mean of 27.5. The winter of 1959/60 was mild in December and January it did turn colder in February with a good amount of snow fall (25.6”) March started cold and it stayed that way all the way until the 27th In that time the highest high was just 38 and most days were in the 20’s and low 30’s The low dropped below 10 on ten nights and the low for the month was -1. But as Mookie would say it was warm on the when the temperature jumped all the way to 65. April was near average with highs reaching all the way up to 83 on the 22nd and 23rd

Then came March 2012. While 1960 and 1965 were unspring like on the cold side 2012 was unspring like on the mild side. The winter of 2011/12 was much like the winter we just had with that winter haven just 47.7” of snow fall during the met winter (compared to 42” this past winter) and on the temperature side the met winter of 2011/12 had a mean of 32.2 compared to 30.5 this past winter so the while last winter was milder then the winter of 2011/12 there was less snow fall. Now on to March 2012 the month started out on the cool side with the first 5 days only in the 30’s and 40’s Then on March 6th the temperature soared up to 63 and the next 3 days were well in the 60’s before dropping down into the upper 30’s for just one day. From March 10 to the 13th the highs were in the upper 50’s to mid 60’s But on March 15th the temperature jumped up to 80 for 9 days in a row the temperatures were more like mid to late June than March with the high reaching all the way up to 87 on 21st The warm temperatures brough the leaves on the trees and there was a early fruit tree bloom. But more average temperature in April caused extensive damage to the fruit crop when the temperatures reach 30 on the 6th and 7th and even more when the readings fell to 28 and lower on the 27th and 29th

It will feel very cold this weekend with temperatures only in the 30’s today and there is a chance of some snow (it may change) for Sunday night.

Take care and try and stay safe in the days ahead. I never had the slightest idea that we would have something like this happen. I know most will get thru this but the scars will stay with many for a long time.

My Barometer is well to the “right”. This is a robust High Pressure System over us.

Yeah, i remember that.

Went for a walk. It’s cold out!

The sun is beautiful out there!! Not warm enough though. LOL!! I just heard it is going to snow 1-2 inches. It will melt fast.

I have been trying to get scrips refilled. Where I go there is no drive thru. They told me there was one way out from here. I can go to this other place closer to home and still stay in network. I cannot go in the stores. Yesterday groceries were left on my porch – she did an awesome job. I usually shop (at the store) at the Meijers by me and they offer delivery or pick-up. It worked great and it was better than me going in there. I haven’t been anywhere in week. I wish it would warm… Read more »

That’s my fault I took the plows off, whoops. Lol

LOL!! Mine too. I put all my snowman shelf sitters away. LOL!!

Well now we count temps on at around midnight on here how about 18* degrees last night out at thee YARDOFBRICKS. January cold I would say …we are getting there …Have a safe Saturday INDY

Sad to see him pass.
Slim

We lost a great singer.

I saw Kenny and Dolly at the Lansing Civic Center with my family when I was about 12. I really enjoyed it, although I would have never admitted that to my fellow mullet-haired, leather jacket-wearing friends. HBO was new to us at the time and they showed Six Pack often. I must have watched it a dozen times one summer. He was a cool dude.

Thanks for the info Slim – I take my hat off to you as you are the master of data for this site…
Tomorrow I will have resources and links for entertainment for both kids and adults.

March madness IS running full force, just not in the direction we had hoped…

We still have no real idea as to how this will all play out. But it sure looks like things will never completely be the same. This could be the turning point of the the 21st century.
Slim

That is for sure!

We have another cold weekend on tap! Skiing here I come! ThIs is awesome!