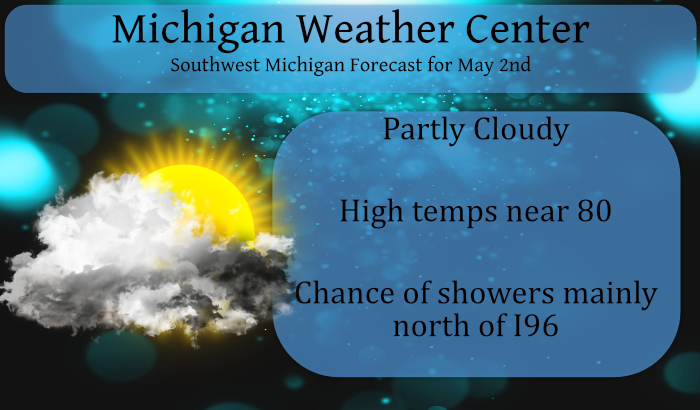 Below is Aprils climate summary from the NWS:

While we have been precipitation starved over the past few month I thought it would be a good time to put up the historical tropical storms which have came up into Michigan (this goes back to 1863):

Oh man, gonna have to fire up the A/C tonight!! Incredible heat for this early in May!!

This is the fourth 80 degree day here this year already. For the record – you can’t tell the difference between 79 and 80.

For sure Mark! Been a tremendous warm spring!

81 degrees here and at the airport. What a cool day we are having?

Grass is very hearty. I put down some grass seed a month or so ago – just in the spots where the dog did her business all winter long. It’s coming in nicely now.

Awfully warm out today, looks like the rest of the week will be more refreshing. Definitely still need to adapt to the warmer weather.

Agreed. Feels hot today. I shouldn’t be sweating this much on May2nd.

The last half of April was colder than normal and very windy! Quite a cool pattern!

Yep…accidental 48hr warmth, then a cold May.

You got it! Starting Tuesday and lasting multiple days we will be entrenched in a cool trend!

So the Climate Summary had all reporting stations above normal for April, including several record highs around the area. This means that either the Summary is wrong, or the multiple posts every day telling us how cool April was are wrong. I think I’m inclined to believe the Climate Summary.

One of reporting station not listed had a April mean of -0.3 and that was Holland. But the month was close to average at Grand Rapids, Kalamazoo and Holland. Near average is considered less than a degree (+),(-) or (0) of course months right at average are the most rare. For the state of Michigan all other reporting stations were above average for April.
Slim

The overnight low here at my house was a warm 63 and the official overnight low at GRR was a summer like 65. If it stays above 62 at the airport until midnight that 65 would set a new warmest minimum for May 2nd at Grand Rapids. There was just 0.01″ of rain fall here yesterday and overnight as several periods of sprinkles came thru. At this time it is partly cloudy and 66 here and the last reading at GRR was 67.
Slim

Enjoy the one day warm up, because the bottom falls out later this week? Get ready for a well below temp week and beyond! Incredible cool pattern the keeps rolling!