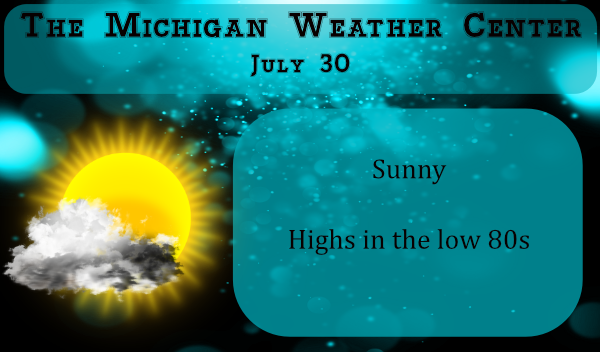 We have the tropical storm season ramping up with Isaias heading for the Dominican Republic and is forecast to move toward Florida by Saturday.  This is the only system of note in the Atlantic or Pacific.

It would be earliest in the season that a storm starting with the letter “I” has formed, . The current record is Aug. 7, 2005 when Tropical Storm Irene formed.

Colorado State University’s updated seasonal forecast which published earlier this month, and called for 20 named storms, nine hurricanes and four major hurricanes this season. That’s significantly more than the average of 12, six and three. The forecast came before the recent formation of Tropical Storm Gonzalo and Hurricane Hanna last week. 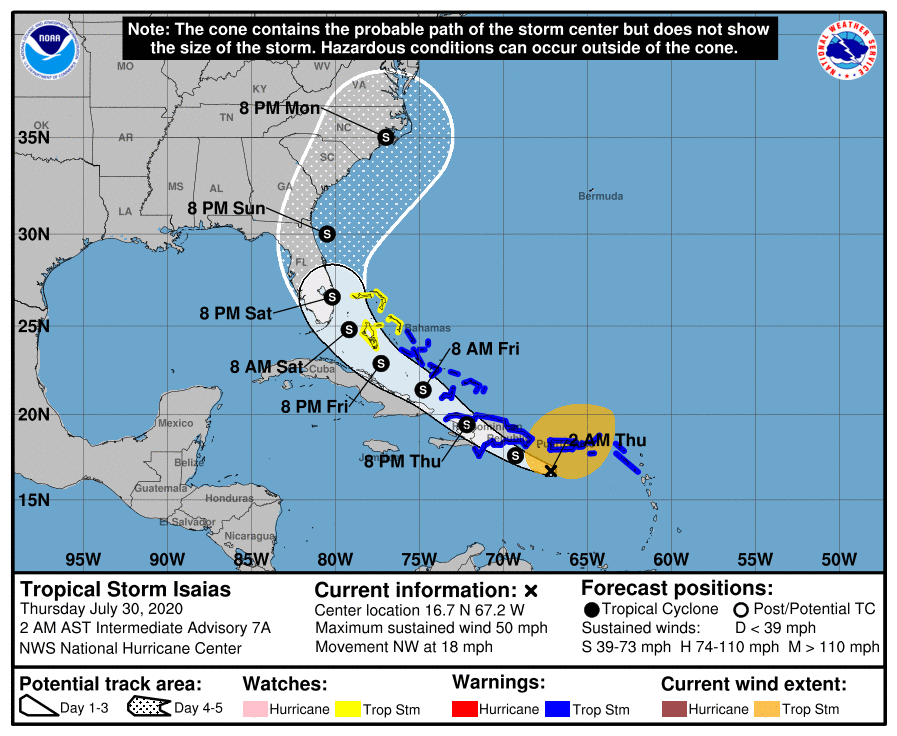 No storms for us, just lots of sun and warm seasonal temps in the low 80s.  Next week we will see our temps drop to below normal with highs in the 70s which will be very nice indeed.  Our next chance of rain won’t come until Sunday night.

It really is awesome to see. It is so quiet too.

I got the following info from my daughter:
from the Detroit Free Press, Weather update; temps should fall the rest of summer, no more90;s

Your friendly reminder that while there are still 4 weeks left of meteorological summer, the warmest days are likely behind us,” the service stated. “It’s all downhill from here.”

The post included a chart indicating the first snowflakes are currently expected around late October.

That is very interesting!

Wow! Looks like my guess was right. Like I mentioned earlier, it is very difficult for this area to go that long without a day or two of clouds or rain which would keep temps down. What a long streak! Thanks Slim!

No big deal about 35 days with a high temp of 80 degrees or higher, because the average high temp during the past 35 days is in the low to mid 80’s anyway! Not a bad summer with only one mini heat wave all season! incredible!

If it’s not a big deal and happens all the time, please give us all a list of years that has happened. I’m guessing it’s not very many.

I am looking into that right now. I can say that 2020 should have all 31 days reach 80 or better. That will tie 1955 as the only years that has happened.
Slim

Wrong again. It’s very rare. Almost every summer we get a big cool down just like we see big warm ups in the winter from time to time.

Currently 75* beautiful degrees in Mackinaw city so ready for this weather in August to come ….INDY

Did not realize until reading Bills Blog what a long stretch of days in a row over 80 we’ve been on. Today will be the 35th day in a row, that is quite the streak. It is hard to go that long without getting a cloudy or rainy day or two mixed in that keeps the temps down, but not this year.

Barry, it is uncommon indeed.
Slim

58* degrees here in Boyne mountain this morning nothing better to a Fall feel in the air at the end of July up here …..INDY

We’ve only had 3 below average days all month and we’re going for one of the warmest July’s in the past 30 years. I love it!

It is a rather nice and comfortable morning. The current temperature here at my house is now 67 with mostly clear skies. The low here was 60 and the low at GRR was also 60. Here is a kind of fun fact. While this July is going to end up with a mean temperature well above average. Most of the heat was in the first 10 days of the month. During the first 10 days of July the average H/L here at Grand Rapids was 91.4/67.6 for a mean of 79.7. But between the 10th to the 29th the average… Read more »

Yes after our mini heat wave at the beginning of the month the so called more major heat coming maybe even worse never pand out ….Lots of speculation on here and local weather stations….Boy 2012 was a lot hotter… Seeing more 70’s as we get into August looks fantastic…INDY