This week in History – The Michigan Weather Center
MichiganState Weather Alerts
There are currently no active weather alerts. 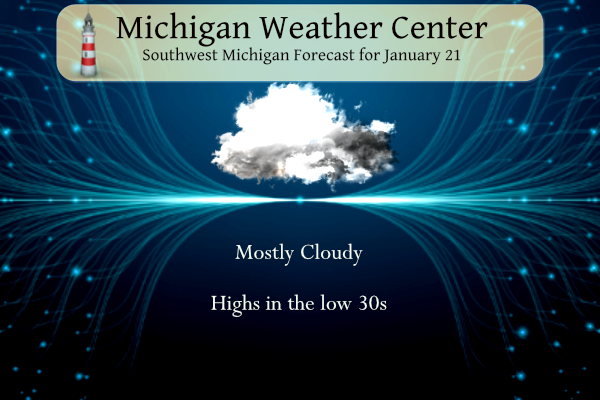 This week in History

Good morning. The official H/L yesterday at Grand Rapids was 36/31 there was a reported 0.01” of precipitation and 0.1” of snow fall. At 7 AM there was a trace of snow on the ground but that melted rapidly. For today the average H/L is 30/18 The record high of 61 was in 1906 and 2017 the record low of -15 was in 1984. The record snow fall amount of 6.1’ fell in 1958.
In looking back at Weather History the week of January 21 thru the 27th in years past. First off is.
January 21
1984: The temperature hits a record low of 15 below zero at Grand Rapids for the second consecutive day. The temperature at Lansing only manages to reach zero degrees during the day.
That January Grand Rapids had a mean of just 17.1 and that was -7.7° below average. The high for the month was just 36 on the 6th and the low of -15 was on the 20th and 22nd the low also reached -14 on the 15th for the month there were 8 days with a low of below 0° one day with a high of just +5 and a total of 7 days with a high of less than 20. February 1984 was much warmer than average.
January 22
2005: A blizzard drops a foot of snow across southern Lower Michigan with strong winds creating drifts up to 4 feet deep.
That January there was a cold spell around the blizzard and there were 7 days out of 8 with lows below +10 of 3 days with lows below 0. There was 12.3” of snow fall at Grand Rapids, 12.6” at Lansing and 9.3” at Muskegon.
January 23
1909: Lower Michigan is in the midst of a three day stretch of warm weather. Lansing hits a record high of 60 degrees. Grand Rapids reaches 56 degrees, also a record.
In January 1909 up to the 21st when Grand Rapids had highs of 48,52,60,56,39 and 40. It was a true January thaw as there was 9” of snow fall on the 29th
January 24
1967: A huge storm is gathering over the Plains States. Out ahead of it, strong southerly breezes bring record warmth to Lower Michigan. Lansing soars to 66 degrees, the warmest on record for the month of January.
There was a massive January thaw in 1967. The thaw started on January 21st with a high of 42. Then there were highs of 52,58,66,and 61. But there was a storm coming.
January 25
1950: Muskegon sets the record high for the month of January at 63 degrees. Grand Rapids also ties their monthly record high of 66 degrees.
1967: Temperatures reach the 60s for the second day in a row across Lower Michigan. However, the spring-like weather is about to give way to one of the greatest snowstorms on record.
I will look at the storms of 1967 and 1978 next. But now in January 1950. There was only 2” of snow on the ground before the big thaw of 1950 but at Grand Rapids the temperature reached 29 on the 24th then shot up to 66 on the 25th before falling to 43 on the 26th At Lansing the temperatues were 57,65 and 50. At Muskegon it was 59, 63 and a cooler 39. And down at Kalamazoo it was 57, 67, 65 then 30.
January 26
1967: Temperatures in the 20s are some 40 degrees colder than the day before, and heavy snow begins falling, piling up a foot or more along with increasing winds.
1978: A storm known as the Cleveland Superbomb moves north from the Gulf of Mexico and deepens explosively, becoming one of the worst blizzards in Midwest history. From one to two feet of snow falls across southern Lower Michigan, whipped into huge drifts by strong gusty winds. Several new records were set including a new record low sea level barometric pressure of 28.68 , observed at 6:00 AM. At least 9 deaths were attributed to the blizzard, most roads were impassable, roofs collapsed under the weight of the snow and the airport in Grand Rapids was closed from late on the 25th until the 27th. Governor Milliken declared a state of emergency and requested additional federal aid for snow removal.
Snow fall totals for the 1967 storm Grand Rapids 18.0” Lansing 24.0” Muskegon 11.6” At the time I lived in Bay City and at Saginaw the official amount was 23.8” but I think Bay City had much more and we were snowed in for 5 days.
In the 1978 storm Grand Rapids storm total was 18.4” at Lansing 19.3” at Muskegon a 4 day event with lake effect 35.1” and up in Saginaw 23.9”. The storms of 1967 and 1978 are the bench mark in winter storms in our area.
January 27
1994: A snow and ice storm brings travel to a halt across Lower Michigan. Freezing rain causes widespread power outages and results in 5 million dollars damage
In 1967 and 1978 it was the after storm clean up. But in 1994 it was a ice event here in Grand Rapids there was a two day total of 1.55” of rain of that there was 1.7” of snow fall.

GIVEN LACK OF STRONGER OMEGAS/ISENTROPIC LIFT WE EXPECT THE SNOW
TO BE LIGHT WITH ONLY AROUND AN INCH OR LESS OF ACCUMULATION
ACROSS OUR AREA. IMPACTS WILL BE MINIMAL GIVEN SFC TEMPS NEAR OR
JUST BELOW THE FREEZING MARK.

IT IS STILL FAR TOO EARLY TO GET INTO TOO MANY FCST SPECIFICS
WITH THIS SYSTEM GIVEN UNCERTAINTY ON EXACT STRENGTH AND TRACK OF
THE SYSTEM. THE 00Z ECWMF ENSEMBLE MEAN FOR LOW LOCATION TAKES IT
FROM FAR EASTERN KY TO NEAR PIT BY 00Z THUR.

I love late winters that hang on well into Spring! All signs point towards a wild back half of winter! Get prepared and don’t say you were not warned! Don’t believe the propaganda that some of the warm weather fanatics are wishcasting!

CPC has been right all winter!! Looking like a nice warm up into March and April!! BRING IT!! Get them Morels popping early this year!

Average temps in March are 40’s and 50’s!! I love short winters. Groundhog might as well stay in his hole, all signs point toward early SPRING!!

The groundhog is actually incorrect more often than correct. So if it see’s its shadow then an early spring would be more likely 😀

Not too early. I like the local orchards and farms to have good crops.

Wow! So much for a big pattern shift!

Another model is showing winter hanging on into April! We have a ton of cold and snow coming yet this Winter/Spring!

Funny how some people think 35 degrees with a wind chill on the 20’s is warm! What a joke!

Thanks Slim. I wasn’t around for the ‘67 storm, but definitely remember the ‘78 one. For some reason I don’t recall the ‘94 ice storm.
Found this radar time lapse of 2022 if you have a few minutes to waste:
https://m.youtube.com/watch?v=pt1pXzyQgPY

Thank you for your service. My dad was an army man.

Another bust for Wednesday? Storm track has moved southeast. Where’s the snow?