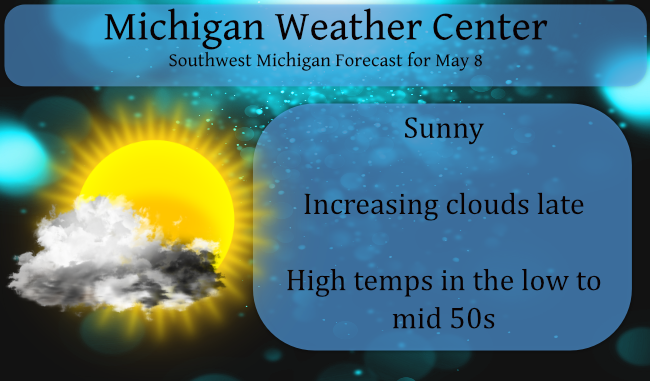 On May 9th 1923 one of the strangest snow storms to ever hit Michigan happened.

Here is the write up from the NWS office out of Detroit on the storm.

Not since records have been kept in Southeast Lower Michigan
(Detroit as far back as 1870), has the snowstorm of May 9th
in 1923 been equalled in season lateness and magnitude.

A strong cold front, of Arctic origin, pushed across Southeast
Michigan on the afternoon of the 8th, creating scattered thunder-
storms. The strength of the front was quite evident in Detroit.
The temperature plummeted from a near normal reading of 62
degrees at 100 pm to a winter like one of 34 degrees by 600 pm.
Behind the front, the stage was set for some startling weather
developments for the month of May…even in Southeast Lower
Michigan. Rain mixed with snow fell across the area during the
evening of the 8th. Detroit received an estimated inch of snow
which melted on the ground before ending by midnight.

On the morning of the 9th, a low pressure area developed along
the front in northwest Ohio and moved over Lake Erie during the
afternoon. The developing low pulled warmer, moist air north from
the Ohio Valley and mixed with the unseasonably cold airmass
over Southeast Lower Michigan. As a result, a heavy, wet snow
began falling during the forenoon hours and continued through the
afternoon. Arguably, one of the most astonishing things (and
there were several) about the mid-spring snowstorm was that the
bulk of the snow fell during the time of day which is normally
considered “the heat of the day” or “afternoon heating” when
normal highs of the day are attained. The afternoon temperatures
never budged from the lower 30s (31-33) and was accompanied by
a stiff northwest wind, averaging 15 to 25 mph. Keep in mind,
the normal or average high for May 9th is 67…some 35 degrees
warmer!

The snow ended by the evening in Detroit and at 800 pm, six
inches was reported on the ground. The story was even more
fantastic as one traveled west and north of Detroit across
Southeast Lower Michigan. Generally, six to nine inches fell
west to the Ann Arbor area, northwest through Howell, north
across Pontiac and northeast up to Port Huron. Even more
incredible, snow depths of around a foot were reported at Flint
and Lansing north into the Saginaw Valley. Widespread damage was
reported to trees, power lines (many had a two inch circumference
of snow hanging on them) and telephone poles, especially in the
Saginaw Valley. Even so, economic damage was surprisingly small,
especially to spring vegetation. Evidently, the earlier spring
weather had been abnormally cold and this led to a late green up.
Substantial damage from the cold to vegetation and crops was
actually averted due to the insulation affect of the heavy, wet
snow. Many May snow records (amounts and lateness in the season)
were shattered and stand firm to this day over Southeast Lower
Michigan.

By the next morning (10th), much of the snow had melted and by
the evening, it was just a memory. The official high in Detroit
on the 9th was 39, but that occurred just after midnight, before
the storm. The low was 31, which occurred in the afternoon during
the storm, giving a mean of 35 for the day and 21 degrees below
the normal of 56. Other May record snowfalls in Detroit pale in
comparison. In 1912, 1.5 inches fell on May 13th for the second
highest amount and the latest snow actually occurred the last day
of the month, May 31st, 1910 with a trace.

So, the next time you think it’s too cold for this late in spring
or we can’t possibly have a measurable snowfall in May across
Southeast Lower Michigan, you might want to THINK about it again
(or maybe not).

Interesting storm Slim. We don’t even get storms that big in the Winter anymore. The weather we are having now is just fantastic for working. Won’t last but it’d be nice if it did.

Furnace cranking this morning and it’s May 8th such a cool Spring we are having just lik the previous past years nothing changes!! INDY

I have never heard of this event.

No first here this morning, thankfully. Maybe it was due to the breeze all night?

That sounds simply fantastic! Skiing and snowshoeing in May! Bring it!

geez, snow in May – just goes to show how unpredictable our weather can be. Nice post Slim!
We have 29.3 degrees at 5:30 this morning.