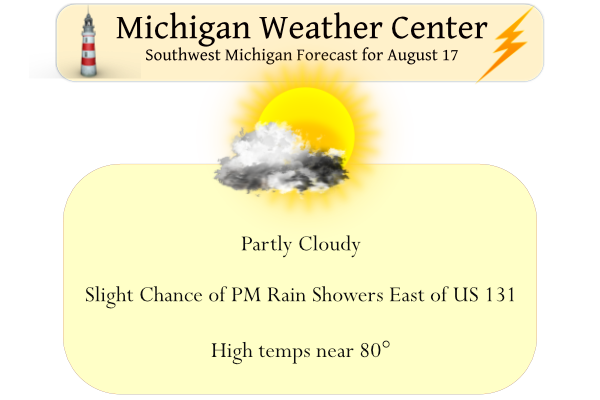 Hard to believe we have only two weeks left of Met summer.  I am four years into retirement from the workforce and the time just flies by – seems the older I get the faster it goes…

Expect another day of isolated rain showers this afternoon and evening, mainly in areas east of US-131. Otherwise, the skies will be mostly sunny. Isolated showers are again possible on Thursday, but most areas will remain dry through Friday. A system will bring renewed chances for rain on Saturday, with showers and thunderstorms becoming likely on Sunday, especially across southern Lower Michigan.

1987: A total of 3.61 inches of rain falls at Grand Rapids, making this the second wettest August day on record and contributing to a record monthly total of 8.46 inches.

1988: A tornado struck East Lansing and then proceeded southeast, leaving an intermittent damage path south of Okemos to Gregory. A man camping near Stockbridge was killed when a tree fell on him.

1995: Lightning struck and killed a 33-year-old man walking through his campsite in Coldbrook Park in Kalamazoo County.

1978: A waterspout moved inland off Lake Michigan just south of Little Sable Point, about 8 miles west of Shelby in Oceana County. Several cottages were damaged and Scenic Drive was blocked by falling trees. One person was injured when a picture window was blown in.

1938: A tornado struck between Oil City and Mount Pleasant in Isabella County. No one was injured but a home was torn apart with the roof carried about 100 yards.

1979: High pressure from Canada brings record cold temperatures with Muskegon falling to 36 degrees, the coldest ever recorded there in August. At Grand Rapids, it falls to 40 degrees and at Lansing 39.

1988: It is the last hot day of the hot and dry summer of 1988. Record highs were set at Grand Rapids with 98 degrees, Lansing with 95, and Muskegon with 93. Thirteen of the first seventeen days of August had highs over 90 degrees at Grand Rapids, but none after today. The transition to cooler weather is marked by severe thunderstorms that bring large hail and damaging winds during the late afternoon and evening.

1943: Autumn is in the air with record cool temperatures of 41 degrees at Grand Rapids and 43 degrees at Muskegon.

1955: West Michigan is in the midst of another heat wave with Grand Rapids setting a record high of 97 degrees, helping this become the second hottest August on record there.

1939: A total of 4.22 inches of rain falls for the wettest August day on record at Grand Rapids.

1977: Cool air from Canada brings record lows of 37 degrees at Lansing and 43 degrees at Grand Rapids.

1996: Severe thunderstorms produce damaging winds from Cadillac to Ionia. Montcalm County is one of the hardest hit places. Numerous trees are blown down from Greenville to Sheridan. In the town of Sheridan, there are several reports of building damage mostly to roofs. A school in Greenville had a large plate glass window blown out.

2007: Heavy rain falls across southern Lower Michigan for the second consecutive day. Grand Rapids and Lansing both set daily rainfall records and some places see over 4 inches of rain for the two day total on the 19th and 20th.

2016: Tornadoes strike from Bangor to Grand Rapids and east of Belding. There were no injuries, despite damage to several buildings and hundreds of trees being down.

On August 15, 1951, an F1 tornado developed from a severe thunderstorm at 3 pm and hit Lapeer county.

On August 16, 1968, 4.45 inches of rainfall fell in Flint. This is the record for the greatest precipitation recorded in Flint in the month of August and is actually greater than the normal amount of precipitation for the entire month (3.43 inches).

On August 17, 1988, the high temperature reached 100 degrees in Detroit, 96 in Flint and 91 in Saginaw. This was the last 90-degree day of the very hot summer of 1988. A significant cold front moved through Michigan on the 17th. High temperatures ranged from 65 to 80 degrees for the rest of the month of August 1988.

On August 19, 2010, a supercell developed over far northern Saginaw late in the afternoon, then tracked southeast along a frontal boundary. This storm produced a swath of wind damage with winds up to 80 mph, large hail up to golf ball size, and eventually two tornadoes as it moved through Macomb County. The first tornado touched down near the intersection of 22 Mile and Hayes Road, tracking south-southeast before lifting just east of Hayes Road on M-59. Maximum winds were estimated to be up to 90 mph with this EF1 tornado. Damage included multiple homes with roof damage, along with downed trees and power lines. The second tornado touched down just east of Romeo Plank and north of Canal Road. The tornado tracked southeast before lifting just west of the intersection of 14 Mile Road and Harper Avenue. Maximum winds were estimated up to 85 mph with this EF0 tornado. A few homes sustained window, garage, and shingle damage. Numerous trees were blown down.

Also on August 19, 1998, Flint experienced a record cold temperature of 41 degrees for that day.

On August 20, 2011, severe thunderstorms were concentrated mostly along the M-59 corridor, causing the Dream Cruise along Woodward Avenue to be cut short, as minor damage was reported. The other notable item from this event was a weak tornado reported near Chesaning in Saginaw County.

Also on August 20, 1996, 0.29 inches of rain fell in Detroit. This would account for over half of the 0.43 inches that would ultimately fall that month. August 1996 ended up being the driest August of the 20th century for Detroit.

On a side note. There has been not only a thunderstorm drought in parts of Michigan there has also been a tornado drought as well. So far this year there have been only two reported tornadoes in the state of Michigan (the EF3 storm in Gaylord on May 20th and a small EF0 south of Flint)
Slim

I keep seeing things about the the northern lights? Any chance for us down here or with that moon at this stage it would be difficult? How about up by the Soo Locks?

Many years ago the best display of the “northern lights” that I ever seen was up by the Soo. Not sure how they will play out around here as there is way too much ground light. But yes in the UP near Lake Superior on a clear night would be a good spot.
Slim

Thanks Slim…
I have only seen a few late one July after Ottawa County fair about 30 yrs ago.

The official H/L at Grand Rapids yesterday was 82/55 officially there was no rain fall reported. Here in MBY there was a cloud that came overhead and from that cloud there was a brief shower so I ended up with 0.01″ of rain fall. There was 79% of sunshine reported at GRR. The overnight low here in MBY was 57 the overnight low at GRR was 58 at the current time with clear skies it is 68 here. For today the average H/L remains at 81/61 the record high of 98 was recorded in 1988 the record low of 45… Read more »