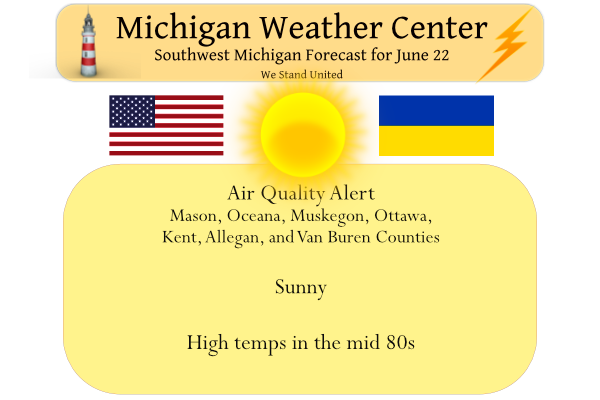 We will see typical mid-summer conditions today with highs in the 80s and mostly sunny skies. Humidity levels will be down just a bit thanks to northwest winds of 10 to 20 mph with the passage of a cold front.  Yesterday’s high was 93° and the low 60°.

1954: A tornado strikes in Jackson County at Gillett’s Lake, damaging several houses and cars but causing no injuries.

1995: Muskegon hit 98 degrees, their highest temperature on record in the month of June. Their second hottest June reading of 95 degrees would occur the following day.

2009: Severe weather strikes with three tornadoes and downburst winds. A tornado partially unroofed a home south of Allegan and another tornado took the roof and deck off a home near Richland in Kalamazoo County. A weaker tornado downed trees and did minor damage to a house in Alamo Township, Kalamazoo County.

1953: An early summer heat wave peaked with temperatures around 100 degrees. It was the hottest June day on record at Grand Rapids with a high of 102 and a sultry low of 79 degrees.

1988: The hot summer of 1988 got off to a sizzling start with record highs of 98 degrees at Grand Rapids and Lansing.

1996: A tornado struck from near Weidman to the west of Rosebush in Isabella County. Three homes were damaged and four barns destroyed, along with several other outbuildings. Several silos and farm machinery were damaged. Other tornadoes hit near Frankenmuth and Imlay City.

1957: At least four weak tornadoes hit southern Lower Michigan. At Hudsonville in Ottawa County, damage is down to a warehouse. A barn is destroyed near Pinconning in Bay County. Several barns are damaged or destroyed in Berrien and Cass Counties. Trees are taken down at Dumont Lake in Allegan County.

2015: Severe thunderstorms with brief tornadoes and downbursts strike across Lower Michigan. Portland, Michigan is hit by a small tornado with winds estimated over 100 mph.

1870: An extreme heat wave began and lasted through the end of June. Temperatures in the mid and upper 90s prevailed most of that time. Lansing set their all-time high for June of 99 degrees on the 25th.

1998: A severe thunderstorm produced hail up to 3 inches in diameter and two tornadoes as it tracked across Eaton and Jackson Counties. The first tornado touched down just east of Eaton Rapids and downed trees and power lines. The second tornado hit Layton Corners in north-central Jackson County. This tornado did about half a million dollars in damage as it did minor damage to about a dozen homes.

1969: A tornado begins near Cedar Springs in Kent County and moves east for seven miles, damaging a store and destroying a barn, chicken coop and 14 camper trailers.

On June 20, 2021, severe storms, including the first tornado of 2021, occurred during the evening and overnight hours. The bulk of the severe weather occurred over the Metro Detroit region as well as Monroe and Lenawee Counties, and much of the region saw soaking rainfall that provided some relief to the ongoing moderate to severe drought. A brief EF1 tornado occurred near Riga in Lenawee County just before 9:30pm, damaging 5 homes, 4 outbuildings, 3 barns, and numerous trees. This was the first tornado in Lenawee County since June 2010.

On June 20, 1992, the high temperature for Flint reached a chilly 51 degrees after a cold front had passed the day before. This temperature reading turned out to be the record low maximum for this date. This record low maximum was one of several that occurred over Southeast Lower Michigan during the “Cold Summer of 1992”.

On June 21, 1996, severe thunderstorms developed along a warm front across central lower Michigan during the evening on the 21st. The storms moved southeast across the Saginaw Valley and the thumb region during the period from late evening on the 21st through the early morning hours of the 22d. The result was an extremely damaging weather event, as flash flooding caused millions of dollars of damage to property, and 3 documented tornadoes touched down. The worst damage was done to the resort town of Frankenmuth, where an F3 tornado caused about 5 million dollars of damage. The tornado completely destroyed 4 houses and damaged 130 others. No one was injured or killed. Elsewhere, tornadoes damaged homes in Lapeer and Saint Clair counties, strong straight-line winds uprooted trees in northern Genesee county and did severe damage to a mobile home dealership in southern Bay county. Flash flooding was widespread throughout the Saginaw Vally and the thumb region as well. In Bay County, an elderly man was killed when his car was swept from a bridge while he was attempting to cross the Kawkawlin River. Elsewhere, flooding did widespread damage to roads and houses. Dollar damage amounts were difficult to estimate until the growing season actually came to an end, but initial rough estimates placed total damage to crops in the area at several million dollars.

Also on June 21, 1987, an F2 tornado touched down in Novi at the Chateau Estates on 13 Mile Road. The tornado was only on the ground for .3 miles but one death and 6 injuries were reported. 57 mobile homes were destroyed while another 170 mobile homes were damaged.

On June 22, 2017, severe thunderstorms lifting northward out of Ohio caused wind damage to power lines and trees across far southeast Michigan, including the Detroit Metro area. A line of heavy rainfall then set up over the Saginaw Valley and persisted through the night. A swath of 4 to 7 inches of rain was observed in Midland and Bay Counties, including 7.31 inches in Oil City, a 200-year occurrence for that location.

Also on June 22, 2015, four tornadoes hit Southeast Michigan. An EF0 hit Saint Clair County, separate EF1 tornadoes hit Washtenaw and Sanilac Counties, and an EF2 formed in Saginaw County before crossing into Tuscola. The latter was a low-end EF2 with observed major structural damage to one house and two minor injuries at a campground.

Also on June 22, 2011, storms developed out to the west along a cold front and moved through the area as an organized line of storms during the afternoon hours. There were 31 reports of large hail or damaging winds, including numerous downed trees with winds up to 75 mph in Fort Gratiot, a measured wind gust to 75 mph in Swartz Creek and Flint, and golf ball-size hail in St. Clair County. Heavy rain produced flooding in St. Clair County which continued during the overnight hours.

On June 23, 2010, two tornadoes hit far Southeast Michigan during the evening hours. The first was a 3.7-mile-long EF0 tornado just southeast of Saline. The other tornado was an EF1 that was on the ground for 11.5 miles across Northern Monroe County, hitting the community of Scofield. The EF1 damage with winds estimated at 90 MPH was found near Tuttle Hill Rd in London Township where a roof was torn off of a pole barn and substantial tree damage was noted.

Also on June 23, 1997, 1.75-inch hail was reported in Laingsburg (Shiawassee County). This was the largest reported hail in our County Warning Area during the year of 1997.

On June 24, 1998, a series of supercell thunderstorms swept through southeastern Michigan, producing hail up to 1.75 inches in diameter and substantial wind gusts. A spotter in Ypsilanti estimated wind gusts of 75mph! One injury was sustained this afternoon due to a fallen tree limb. Damage across southeastern Michigan totaled $82,000.

On June 25, 2009, A weak low-pressure system coupled with high instability triggered several severe thunderstorms along and south of I 69 during the afternoon hours and early evening hours. Southern Macomb County was the hardest hit, as the majority of the 80,000 DTE customers who lost power resided in Macomb county.

*Poof* So much for the “cool” end of June some on here were claiming. Today’s CPC shows nothing but a continuation of average to warm temps. I love it!

Just noticed that. Wonder why the odd flip flop over the past couple days? It has definitely been HOT!

7 years ago today a tornado hit the town I live in. We had just bought our house around that time and we were going to be moving in the next couple weeks. I lived in Marne at the time and remember by heart sank when I seen the news and wondered if the house was hit. I got in the car and drove to Portland to check and the house wasn’t hit but up the street from us was. The damage was really bad. Going through there today you would never know anything happened unless you drive Grand River… Read more »

So long heat and humidity again… Feels great outside 71 out in my hood .. Speaking of 71 there are only 70 days till September yeahhhh baby … INDY

It is becoming rather dry in our area. I brought that up because the less rain fall there is the better chance that there can be some very hot days. I am not saying that will happen but some of the hottest summers happened in dry years. 1987 and more so 1988 come to mind. The days were hot but less humid and the nights were somewhat less warm.
Slim

Done cutting the grass for awhile its turning brown… INDY

Just thought I would do a check in…how is everyone’s gardens doing? My tomato plants are doing pretty well, beans are sprouting nicely. We bought a couple of honey rock melons starter plants, they have flowers one one of the plants and peas are starting to wind themselves on the poles I put out. My raspberries seem to be on track for around July 4th…my grams old plants and she would say around the 4thbof July they first fruit. Hope everyone ‘s garden is going well.

So far my tomatoes are doing good. I have them in large containers so I have to water them everyday. They have some small green tomatoes on them. I picked up a cucumber plant that was in a container and that is also doing very well and I have had 2 cucumbers off that plant. That also has to be watered every day.
Slim

Yes watering every day. I probably need to haul the hose down to give the raspberries a drink. Need them to make some jam when they fruit. Bought some beautiful strawberries last week. Made some strawberry jam and used some frozen blueberries to make some strawberry/blueberry jam…a household favorite!!!