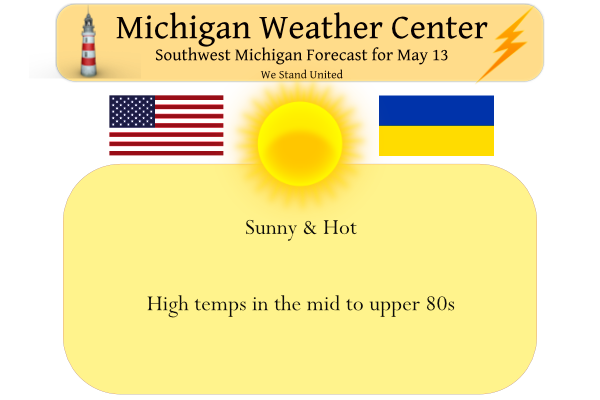 Yesterday we reached 89° with comfortable humidity, the morning low was 60°.
This will be our last significantly hotter than normal day for next week or so. Normal high temps this time of year are in the upper 60s to around 70. Highs away from the lakeshore will reach the upper 80s. Winds will be from the south at around 10 mph.  Dewpoints will be in the low to mid-50s.  We have gone seven straight days without precipitation.
At this point, it appears Saturday will be our best chance of rain with a 50/50% chance here in SW Michigan.   Chances increase to 70% on the east side of the state and 60% north of Grand Rapids.

What a great day it was today. I spent the day at the Tulip Time Festival in Holland. Walked around got some pictures, did some shopping, got some lunch and an elephant ear (love them). Then drove the back roads home through Allegan, Barry, Eaton Counties then north to home. Hope everyone else had a great day!

Lunar eclipse coming Sunday night. At this point, it looks to be cloudy for us, but NASA will livestream the event.

So far in this May warm period there have been several locations that have gotten very hot and have reached highs in the low to mid 90’s with even a 96 reported at Traverses City. It has also reached 90 or better officially at Muskegon and Holland. Most other major locations have not been has “hot” as Traverse City and most locations on the east side of the state only had highs in the 85 to 89 range. I am sure many had readings in the low to even mid 90’s in their home and on their car thermometers. While… Read more »

CPC keeps getting darker and darker red for the next two weeks! I love it!

It is sunny and 86 here at my house. With the lower dew points it is not that bad in the shade. A little warm in the sun. The current reading of 91 is a new record high for Traverse City. I have to say like this warm weather, I much rather have it very warm over it being cold.
Slim

It got much hotter this week than what you were saying a few days ago!

Humm, I do not recall making a temperature forecast for this week because I do not make a forecast but I see on May 5th you had this post
“Wow NWS talking about 5 straight days in the low to mid 80’s in early May and possible record temps!” it looks like the NWS was also off on their temperature guess. I also do not recall anyone making a forecast guess of 90’s at Traverse City.
Slim

It will nice and warm. But I would not call it a “blowtorch” While there will be some 80’s I don’t see any upper 80’s or low 90’s thus no “blowtorch”. While the highs next week will be well above average at this time it looks like they will be below record levels.

All turned out to be inaccurate. We’ve seen plenty of upper 80’s and low 90’s and many records.

I mean Grand Rapids has not reached 90 (you keep talking about Traverse City), and we reached the record in GR by 1 degree… not a bad forecast for a week out IMO. It is called weather, not always perfectly accurate. And again, all info Slim posted regarding the post you mentioned came from NWS data last week

One reason could be that Mookie may not live in the Grand Rapids area.
Slim

Hey everyone! Been a rough couple of weeks but we’re slowly moving forward. The weather has been great for working outside up until this week. Give me temps in the 50’s any day over this mid July 90 degree weather. Hard to believe we’re not even halfway through May and already adding up 90 degree days.

Good to hear from you! I agree this 90 degree temps is hard to take. I hate to say it but it’s too hot.

Hey Barry! Nice to see you here again. Hang in there, bro.

Hope everything is going well! I have the flu (or COVID, not sure) and these hot days are really uncomfortable. Looking forward to next week when we return to our cool weather pattern

Welcome back Barry. Glad your getting some of your business back together.
Slim

Is this the start of a long hot summer? It’s pretty early for all the 90’s around Lower Michigan.

In Traverse City, hitting 92 and then 96 in early May is going to be remembered for years to come. And could be back in the 90’s again today. Muskegon hitting 91 already is pretty unreal as well.

Forget temps around 90 degrees and bring on the 60’s and 70’s! Who in their right mind would want temps in the 90’s? Incredible!

I don’t mind heat, but I despise humidity. Yesterday was fantastic with DPs in the low 40s.

Here is a short recap of the record temperatures set yesterday. Grand Rapids 87 new record. Muskegon 91 new record. Holland 88 tied with 1993 for the record. Kalamazoo 87 tied 2011 for the record. For today the record high are Grand Rapids and Holland 86. Kalamazoo 88. Lansing 91 and Muskegon 84. So there is a good chance that most records could be tied or broken today. With low dew points the temperature fell to 59 here at my house and it looks like the overnight low at GRR was 61. At the current time it is clear and… Read more »

Another day of record temps… but it wasn’t a blowtorch says a few on here. Hmmm LOL

Well there is no such terminology of blowtorch in the weather world. Of course we could also use the term “deep Freezer” in the winter time.
Slim

Another one of those lake breezes kicked in yesterday this time at Huron Beach in Presque Isle County. Went from 95 degrees to 56 in 10 minutes.

It’s been a warm May and so much for the cool down! “It is looking like 70s and possibly 80s could return toward the latter half of next week.”