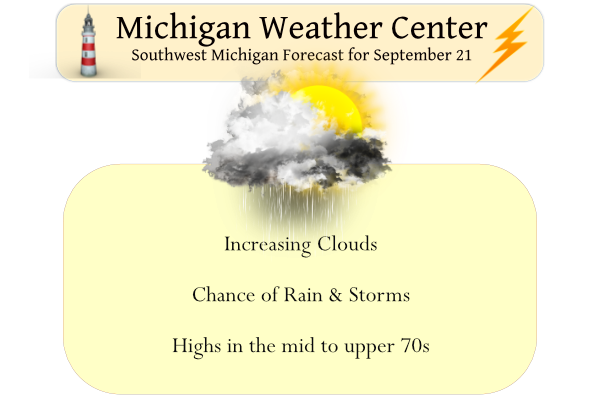 Yesterday our high in Otsego was 77° and the low was 53°.  Our rainfall total was .10 which brought us to .85 of an inch for the month.  The thunderstorms passed to our west in the afternoon as we were driving down 131 to Kalamazoo my wife and I were marveling at the interesting cloud formations.

This is the last day of summer.  Mother Nature has conveniently allowed us a warm day before dropping the hammer to allow a cool Canadian airflow into the area tomorrow to welcome the first day of fall.  There are slight chances of rain and perhaps an isolated storm today with temps in the mid to upper 70s before falling into the 60s for the rest of the week into next week.  Lakeshore counties may even see some lake effect rain tomorrow.

1918: A tornado destroyed a large barn about 5 miles southeast of Grand Haven in Ottawa County, and carried the timbers a half mile.

1957: Thunderstorms with heavy rain of up to 2 inches flooded streets and viaducts in Grand Rapids.

1968: A tornado hits a rural area about five miles south of Lansing at 2:15 in the morning, damaging two barns and a shed.

1863: Lansing records a low temperature of 19 degrees, the coldest on record for the month of September.

1956: Intense lightning from thunderstorms is responsible for 11 house fires in Ottawa and Kent Counties, accounting for thousands of dollars in damage.

1967: A small tornado struck just north of Lansing at 10:45 in the morning and destroyed a garage.

1952: Hail covered the ground like snow in Cascade Township, near Grand Rapids.

1961: A tornado hit two miles north of Marne. One person was injured and three buildings were heavily damaged.

2006: Small tornadoes hit Caledonia in Kent County and Muir in Montcalm County. The Caledonia tornado did some roof damage to a storage facility and a barn. The Muir tornado caused no structural damage but took down some tree limbs.

1950: Smoke from Canadian forest fires gave the sun an eerie bluish cast and darkened the sky across western Michigan.

On September 19, 2011, Detroit recorded 1.81 inches of rainfall which is a record for the date. This helped push Detroit to its 4th wettest September on record with 6.28 inches of rain. Interestingly, the September rain did not extend farther north. Flint recorded 2.09 inches and Saginaw had 1.73 inches which were both well below average and in the top 30 driest September for those two cities.

On September 19, 2002, an upper air disturbance move across Lower Michigan during the late afternoon and evening hours on the 19th. This disturbance combined with unseasonably warm and humid air across Lower Michigan to trigger widespread thunderstorms. These thunderstorms initially moved into the Saginaw Valley during the late afternoon hours. During the evening, another round of thunderstorms moved from south to north across the region. Some of these thunderstorms were severe with damaging wind gusts, including an estimated 100,000 dollars in damage in Algonac and Harsen Island. Three men were installing a roof at an apartment complex under construction in Ann Arbor when they were struck by lightning. Two of the men were injured, while the third was later pronounced dead.

On September 20, 1978, Genesee county experienced winds of 63 mph with storms passing through.

On September 21, 2010, a cold front swept through Southeast Michigan producing severe thunderstorms north of M-59 during the evening hours. Most reports of severe weather were from the squall line that raced through the Tri-Cities, Flint and Thumb regions. There were 21 reports of severe wind gusts and tree damage.

On September 22, 2005, 3.62 inches of rainfall fell in Flint from multiple rounds of severe thunderstorms. Flash flooding was reported in both Genesee and Lapeer Counties. The severe thunderstorms produced wind damage mainly along the I 69 and I 94 corridors.

On September 23, 1974, record lows on the 22nd and 23rd of 30 degrees and 29 degrees, respectively, brought the earliest freeze on record to Detroit.

On September 24, 1997, southeast Lower Michigan saw its first frost of the year. The temperature fell to 32 degrees at Flint. This missed tying the record by one degree.

Definitely not a dry summer! Watered the lawn 2 times all year!

Loved this Summer didn’t haft to run the air conditioning as much as Summers past but cut the grass alot more .. INDY

Got to see some pretty great storm structure (got a pic of Mammatus) heavy rain, small hail. Now great views as the storms push away.

77 and very humid this morning in the Windy City. The air is thick. Can’t wait for the cold front.

Yep…fine looking storm. It slowly moved over the backyard, and headed East. Just one rumble of thunder, which sounded something like, “your Summer has come to an end”. 😉

* At 900 AM EDT, severe thunderstorms were located along a line
extending from 7 miles northwest of Greenville to near Jenison,
moving east at 40 mph.

The National Weather Service in Grand Rapids has issued a

* At 850 AM EDT, a severe thunderstorm was located 7 miles south of
Lake Isabella, or 9 miles west of Mount Pleasant, moving east at 65
mph.

The official H/L at Grand Rapids yesterday was 75/54 at airport there was 0.28” of rain fall and 18% of possible sunshine. Here in MBY I had 0.19” of rain fall is two storms. The 2nd one had some of the most intense thunder and lightning that has occurred here at my house in a long time. For today the average H/L remains 72/51 the record high of 95 was recorded in 2017 and the record low of 32 was in 1962. Today looks to be the last real warm day for a while as temperature look to stay in… Read more »

Looks like the area from East Lansing over to Webberville was the sweet spot for rain yesterday.

Things look pretty chilly after today. My phone was showing a low of 37 at my house. Brrrr!