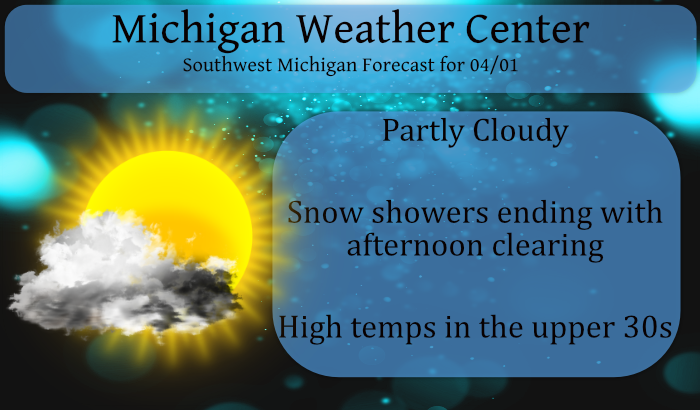 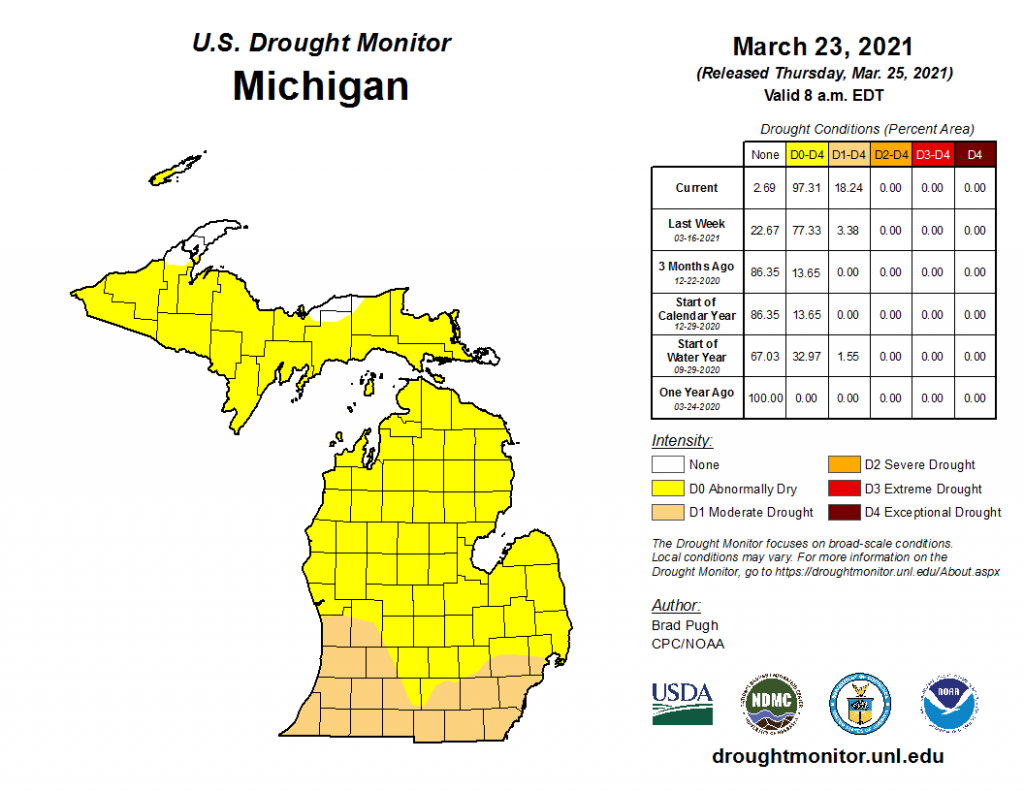 Long-range outlooks have to be taken with a grain of salt, but there are some things to look at currently that can shape how we think spring may turn out.  This year we have had very little in the way of snowpack and very little rain in March which has brought about drought conditions in Michigan as shown in the map above.  (Drought stats are updated every Thursday).

Drought and heat breed a vicious cycle. When it’s this dry, less of the sun’s energy goes to evaporating soil moisture because it’s not as wet. That leaves more of the energy to heat up the air, and the heat makes the drought worse by boosting evaporation.  It is for these reasons we may see a warmer than normal April with many more 70° days than not. 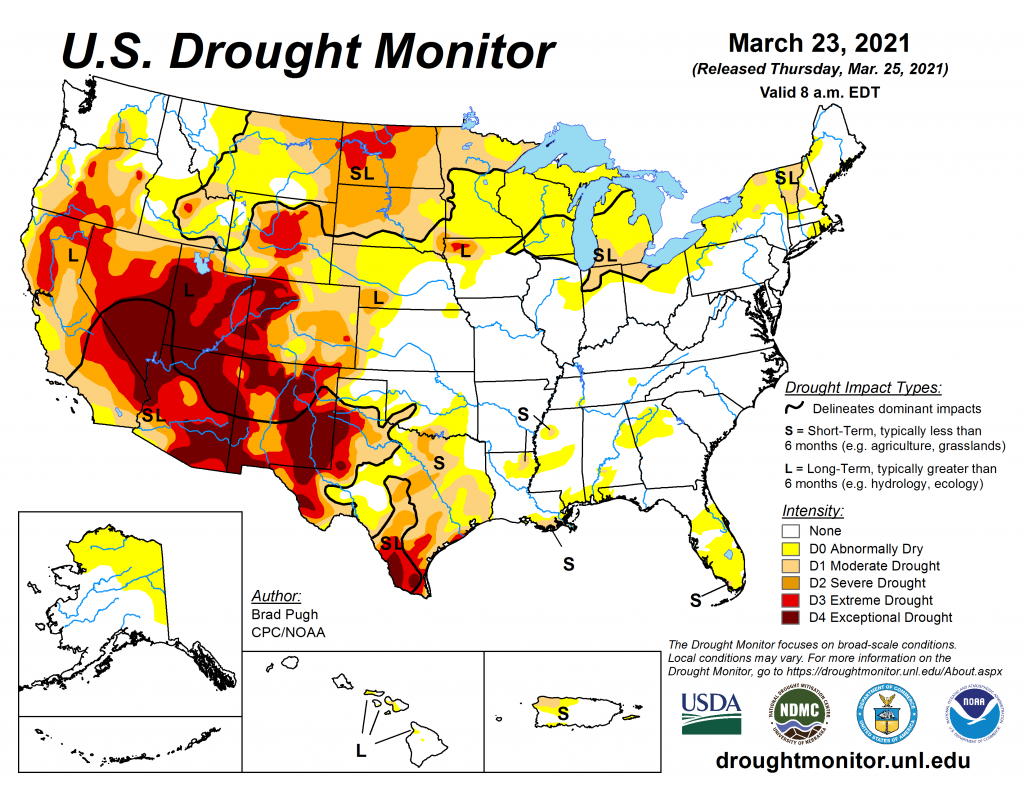 With large portions of the U.S. in predominant drought, it is my belief things will get worse before they get better especially out west where wildfires could be worse than last year.  The only areas in the U.S. which may show greater chances of rain would be the central U.S. and hopefully Michigan if we can get the conveyor belt of moisture from the gulf to move up into the Great Lakes.

Current model data is guessing this to be true.  The Great Plains, the west and Texas may see conditions worsen this spring while the central U.S., the east coast on into New England should see normal to slightly above normal rainfall.

Of course, our seasonal roller coaster ride shall continue until we move into May and things level out.  I have seen some data which proclaims we may see a stormier pattern this spring in Michigan, something we have been lacking the past couple (or more) years.  These are all guesses so we shall see…

Forget golf and check out all of this snow!

With temperatures during the game between 30 and 34 and with snow falling at times it was one of the coldest opening days at Detroit.
https://www.cbssports.com/mlb/news/miguel-cabrera-home-run-watch-tigers-slugger-crush-first-home-run-of-2021-mlb-season-in-a-snowstorm/

Typically by the third week of April snow becomes very uncommon, and the 8-14 day outlook is looking warm, so I think it is safe to say we are done with the snow (after today!) for the season. Also like MV mentioned, the drought does favor warmer weather across the nation. We can always have a 1-2 day period of late season cold, but it would likely be brief and melt quickly (I think May 11 last year we had a trace?)

Very mild and dry March we had. Our area and to the West didn’t even reach 1 inch of precipitation for the entire month and record low snowfall, as in pretty much nothing at all. Overnight just a few flakes and some graupel. How is it no one really had anything but Rockford had so much they’re shoveling?

Currently 25* degrees in my area no it’s not April fool’s it’s cold outside DDDDDD…..INDY

I would have to imagine allergies will be worsening next week with the dry and warm conditions. I do wonder if the drought will help with allergies or not. I know dry weather makes allergies worse, but without much rain, maybe the plants will have trouble growing. I could see it go either way… we shall find out in a few days.

I was wondering the same… but if it was wet and warm…. we couldn’t be outside due to the mosquitoes!!!

Not here in Kissimmee. 92 the last two days. Front is coming through this morning. No humidity and temps in the mid 70s the next few days. Perfect weather.

Looks like we will be bringing the warmth home with us. You’re welcome. 😄🌞

70’s and no humidity is the best! Enjoy you’re trip I’m heading to Fort Myers in August not really looking forward to the humidity …INDY

Not a flake of snow to be had here in Hamilton, but I’m in agreement that the air feels more like December…

With a mean temperature of 41.2 March 2021 will tie 2010 as the 8th warmest March of record so far. There was officially just a trace of snow fall and that will make March 2021 tied with 1945 as the 2nd least snowy March at GR. At Muskegon, the mean of 40.2 will make March 2021 the 7th warmest there. And with just 0.1” of snow fall that will be the 3rd lowest amount but there have been a total of 8 other years where March had no snow or just a trace. Down at Kalamazoo with a mean of… Read more »

8th warmest March on record hu?? Wow by some of the past post one would of thought the hottest March ever lol but then again back to reality ..Let me know when a top 2 or 3 happened thanks slim INDY…

There have been some cold opening days but this will still be one of the colder one at Detroit. But at least it should be somewhat sunny.
Slim

With reading between 30 and 34 during the game I would think it was one of the coldest in history.
Slim

April is starting off cold and snowy! Who would have thought?

Yup next thing you know nobody will be able to go outside and walk around lol….INDY

We got pummeled with snow last night! Looks like it is time to get out the shovel and salt! Nothing like snow on the last day of March and low temps tonight in the teens! Incredible cold! Forget golf the ground is covered with snow and frozen!

We currently have 25 degrees with some graupel falling. We ended March with 1.91 inches of rain recorded for the Otsego area and just a trace of snow.