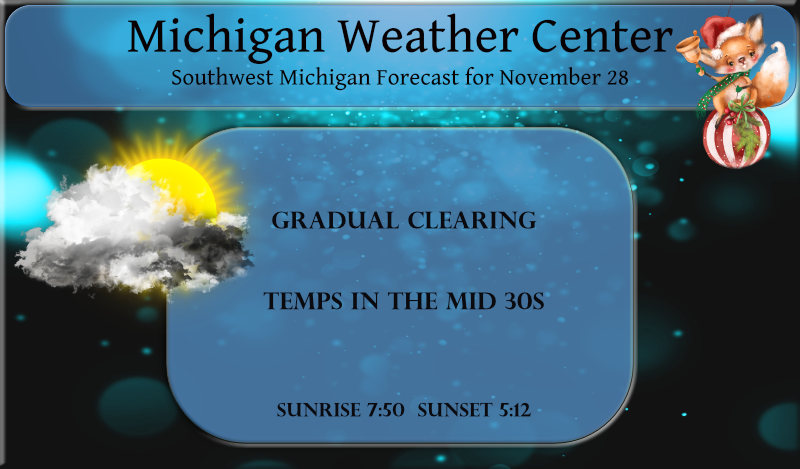 Congrats to the Wolverines (my favorite) on their win yesterday over Ohio – if you didn’t watch it you missed a great game.  They now move on to the Big 10 championship game against Iowa.

We gained another inch of snow yesterday which mixed with some freezing rain towards sunset.  Our total is now 5.4 inches for the season.  The high yesterday was 34° and the overnight low was 23°.  We currently have 32° at 6:30 am.

Definitely a snowier start to the season than last year (not saying much, but clearly not a repeat of last season so far). Still no really cold air through the first week of December, but it will be interesting to see if any of the cold air over Alaska heads this direction towards the middle of the month. The lake is plenty warm enough for lake effect snow!

Great Nov weekend! A snowstorm and U of M annihilated Ohio State! Incredible! Also plenty of long range signals for tons of snow in December! Bring it!

Over 3 inches of new snow on the ground out on hood thats 7 inches for the season brims my total down to 83 more inches togo for the young Winter season…Who Knew??? InDY

I had 2.8″ the official amount at GRR was 2.7″ Holland don’t keep snow fall amounts so we do not know how much fell there. I was at the Rivertown mall area yesterday and there was less snow there then here at my house.
Slim

We are above normal for November snowfall! Great start to winter! Wait till mid December – by then a major Rock n Roll snow party will be taking place! Get prepared now! Buy your ski passes, tune up your snowblower, make sure your car is ready, etc!

We ended up with approx 2.5″ total. Nice forecasting by the mets. It was an exciting day of football. It’s nice that Harbaugh finally got that monkey of his back. Now let’s hope they can beat Iowa so the B1G can be represented in the Playoffs.