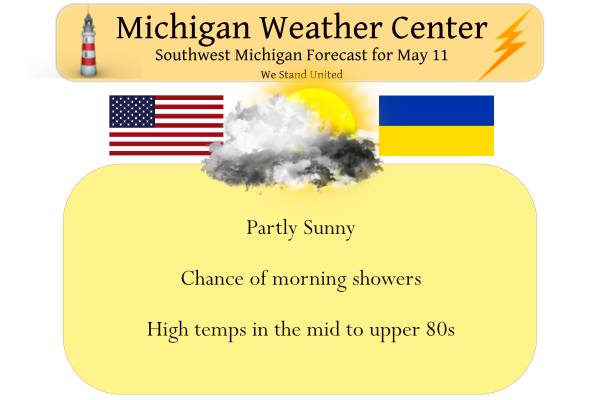 We have a warm 67° at 4:30 this morning,  Yesterday was the first day this year we ran the air conditioner.  Yesterday’s high/low temps were 86° / 66° with partly to mostly sunny skies.  We will see another unseasonably hot day with temperatures around 20 degrees warmer than what’s normal for this time of year. Highs will reach the mid to upper 80s in the afternoon, when there will also be the possibility of a few thunderstorms in the area.

1880: A tornado destroyed two homes and a barn two miles east of Kalamazoo. No one was injured.

1923: A very late-season winter storm dropped up to a foot of snow across Lower Michigan. Records were set for May snowfall at many places including Lansing with 11.5 inches, Grand Rapids with 5.5 inches, and Detroit with 6 inches.

1927: About 40 farm buildings are damaged or destroyed as a tornado moved from near Loomis in Isabella County, across southeast Clare County, and into Gladwin County. Another tornado destroyed two barns and damaged two homes three miles west of Walker.

1902: A snowstorm drops from 1 to 6 inches of slushy snow across Lower Michigan. The four inches of snow at Muskegon is the latest measurable snow on record there

2006: A small weak tornado, determined to be a “landspout” moved through an open field near Schoolcraft in Kalamazoo County, doing no damage.

1956: A severe weather outbreak produces tornadoes, high winds, and large hail across Lower Michigan. A deadly tornado hit near Flint for the second time in three years, killing three people on the southeast side of the city. One person was killed in Gratiot County as a tornado moved between Alma and Ithaca. Muskegon was pelted with baseball-sized hail that caused thousands of dollars in damage to homes and cars.

1980: Kalamazoo was hit by a tornado that killed five people and injured 79 others. Fifty million dollars in damage was done as the tornado damaged or destroyed nearly 300 homes and over 150 businesses.

1886: A tornado injured one person and damaged several homes north of Lansing. The injury occurred as a conductor was blown from a train.

2004: A tornado struck the southeast side of Maple Rapids, destroying a silo and damaging two others. A shed was also damaged. A couple of two-by-fours were driven into the side of a pole barn. Shingles were damaged and ripped off of two homes.

On May 8, 1964, an F4 tornado moved through Chesterfield Township in southern Macomb County, touching down at 4:59 pm. This tornado touched down north of Mt. Clemens and moved across Chesterfield Township near the Lake St. Clair shoreline before entering Lake St. Clair southwest of New Baltimore. This was the strongest tornado to ever hit Macomb County and was responsible for 13 fatalities.

On May 9, 1923, a late-season snowstorm pounded Southeast Michigan. Six inches of snow was recorded in Detroit, with areas around Flint and Saginaw receiving around a foot! Widespread damage was also reported with trees and power lines snapping under the heavy wet snow.

On May 11, 1974, an F3 tornado moved through Livingston County at 5:31 PM, near the community of Hell. This tornado only traveled less than a mile but was responsible for one fatality, 3 destroyed houses, and 15 damaged houses.

May 13, 2018, marked the end of a period of wet conditions across the area with the axis of heaviest rain stretching across the I-696 corridor. Locations saw anywhere between 1.5 to 3.5 inches of rainfall between May 11 and 13 and several roads were closed in Oakland and Wayne Counties due to localized flooding.

On May 13, 1912, Detroit reported a record for the latest snow accumulating an inch or more. The snow was measured at 1.5 inches.

I see pictures of accumulated hail on M66 near Remus as well as a mini landslide occurred with trees down.

I had 92 according to the reading on my van where I was in Allegan County today. I see some big storms occurred up north. Flood Alerts up there.

Mid 60’s and lows in the 40’s next week will be perfect fire weather I will love that ….INDY

It looks to have reached 87 for a very short time between readings at GRR. At the current time it is cloudy here with a temperature of 80 and a DP of 68 that DP is down from the 71 it was at. That high of 87 will be the new 2nd warmest for any May 11th The record high of 89 will stand for this date. If it can stay at 66 or better until midnight Grand Rapids would set a new record warmest minimum for the date. Looking ahead the record high for tomorrow is 86.
Slim

Wow, high of 87 at GR so far today with a heat index of 91 degrees! Blowtorch for early May!

Thunderstorms north of GR are moving every which way but lose crazzy.. Mid 60’s next week fantastic….INDY

It now looks like they will miss us for the most part.
Slim

Keeping a eye on the storms to the north. I first I thought they would slide to the east but that has not been the case. And now are sliding to to the south southwest. At this time it is cloudy here warm and humid with a temperature of 83 and a dew point of 69.
Slim

Those storms are quite a ways off, but the sky is black to the north.

Wow they are getting a TON of rain towards Big Rapids and just to the NW. And 2 active warnings currently

“We have had localized flooding in Isabella County with some washout roads and rainfall reports over 4 1/2 inches in one hour.”

On the flip side of all of the warm temperatures. There is still some snow on the ground up in the UP this is from the ski hill just north of Houghton
https://www.mtu.edu/webcams/ski-hill/
Slim

Those storms if the can hold together will slide into the Bay City and Saginaw area. It has now became cloudy here with a current temperature of a humid 82 with a dew point here of 71.
Slim

Traverse City’s record marks the earliest ever that they have hit 92 degrees. Wow!

Welcome to at least 5 months of glorious summer weather! We made it!

Leaves and flowers are in full bloom here. It feels like a warm summer day. Looks like the forecasted “cool down” next week is just a return to mid 60s to 70s and sunshine… we are at the point of the year where I start to prefer cooler weather than warmer weather until we reach October.

I have to say from May to early October most of Michigan has great weather. Compared to much of the US the state has moderate summer temperatures and many come here in July and August to “cool off” Sort of like many from here go down south in the winter to “get out of the snow and cold”
Slim

Yes October is actually one of our warmer months, it just feels cool because we are coming off the summer. Most of October is 60+ until the end

After today, GR should be above average for temps for May with lots more warmth coming.

Yesterdays CPC 6/10 and 8/14 would disagree with a lot more warmth coming. But then the long range guess from CFSv2 would trend warmer. We shall see how that plays out.
Slim

After today, Thursday, Friday, and Saturday all look to be unseasonably warm days.

Yep, there looks to be several days of nice summer like weather then back to cooler more typical late spring weather.
Slim

That looks to be a wind shift. They Traverse City gets down slopping and thus can get very hot at times. Also some areas just a short ways from the airport may not have gotten all that warm.
Slim