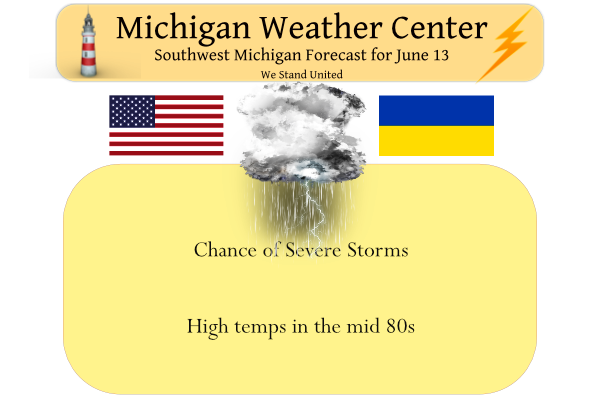 We had a high temp of 80° in Otsego yesterday, the low was 62°.  Today it will become a bit more uncomfortable with temps rising into the low to upper 80s.  The warmest will be in Grand Rapids, Kalamazoo, and surrounding areas.

Heat and humidity will reach oppressive levels on Tuesday and Wednesday, where the combination will make it feel more like 95 to 103 degrees, even in the shade. Heat exhaustion is a concern, and hydration and frequent breaks are a must. Temperatures will tend to stay cooler near Lake Michigan beaches, where water temperatures are still only around 60 degrees, though waves and currents may result in a moderate risk for swimmers on Tuesday and Wednesday.

A Mesoscale Convective System (MCS) is a collection of thunderstorms that act as a system. An MCS can spread across an entire state and last more than 12 hours. On radar one of these monsters might appear as a solid line, a broken line, or a cluster of cells. This all-encompassing term can include any of the following storm types:

Mesoscale convective complex (MCC)—A particular type of MCS, an MCC is a large, circular, long-lived cluster of showers and thunderstorms identified by satellite. It often emerges out of other storm types during the late-night and early-morning hours. MCCs can cover an entire state.

Mesoscale convective vortex (MCV)—A low-pressure center within an MCS that pulls winds into a circling pattern, or vortex. With a core only 30 to 60 miles wide and 1 to 3 miles deep, an MCV is often overlooked in standard weather analyses. But an MCV can take on a life of its own, persisting for up to 12 hours after its parent MCS has dissipated. This orphaned MCV will sometimes then become the seed of the next thunderstorm outbreak. An MCV that moves into tropical waters, such as the Gulf of Mexico, can serve as the nucleus for a tropical storm or hurricane.

A derecho (pronounced similar to “deh-REY-cho” in English) is a widespread, long-lived wind storm that is associated with a band of rapidly moving showers or thunderstorms. Although a derecho can produce destruction similar to that of tornadoes, the damage typically is directed in one direction along a relatively straight swath. As a result, the term “straight-line wind damage” sometimes is used to describe derecho damage. By definition, if the wind damage swath extends more than 240 miles (about 400 kilometers) and includes wind gusts of at least 58 mph (93 km/h) or greater along most of its length, then the event may be classified as a derecho.

We got some thunder and lightning here. Lights have been blinking some. 🙁

I love this rain and keep it coming!

Well what do you know! There is a chance of picking up some rain. Bring it!

Van Buren is the really the only county that saw impacts. I will say I have not been impressed lately with enhanced or moderate risks here in MI.

Like I mentioned earlier, the models were all over the place just 12 hours ago. It’s difficult to fine tune a forecast without some model consensus.

Yeah there was lots of uncertainty to begin with. I don’t blame any of the forecasters, I seen what they saw. Just didn’t pan out. Good news is no power outages for a lot of us anyway going into the heat these coming days so we can be thankful for that!

A lull right now. Thundering & lightning to the south a s west. Was a bit windy. Stopped raining for the moment. Lightning was going across the sky.

NWS websites are wonky. The national map show a tornado warning in the Chicago area but when you click on that area, all the watches, advisories, and warnings are non-existent. NWS GR is the same way. No watches, warnings or advisories.

Looks like a bust for GR! Nothing new, but bring on the rain! We need rain!

That storm has made landfall near South Haven. There is a lot of lightning with that strom.
Slim

Getting some light rain here at this time. There is a lot of lightning in the storm over the lake at this time. That storm in moving to the southeast and will come ashore in Van Buren county near South Haven. There is also a storm in the Chicago area and off to the SE in Southern Ohio. As for the Grand Rapids there is an area of light rain and not much more on radar at this time. But if you are in or near Van Buren county I would really think about taking cover.
Slim

There is some development near Green Bay. Will check on that later to see if that develops into anything. At this time there is some light rain falling here with a temperature of 76 with a DP of 66.
Slim

Radar estimated 70-80mph winds with the storm moving over the lake.

Moderate risk basically along and south of I-94 here in West MI. Portions of the Ohio Valley have been upgraded to a Moderate Risk for the anticipation of a highly organized MCS/possible Derecho developing from a supercell structure across southern WI. Despite the lack of agreement in high-resolution guidance, this supercell is traversing a strong buoyancy gradient (with extreme MLCAPE values exceeding 5000 J/kg noted in the OH Valley). In addition, 40+ kts of effective bulk shear are also present along the buoyancy gradient, which expands across a long west-east corridor over northern portions of the OH Valley. Expectations are… Read more »

Numerous trees and lines down in the city of Madison, WI as reported by Law enforcement.

I find the Precipital Water Values of 2.00” a 1 day in 10 years part interesting.

I know, right? That’s twice they have mentioned that today.

Ottawa, Kent, Ionia and Clinton Counties and points south are under a Heat Advisory. This is for heat index values up to 103 degrees. Get ready for the sizzle. If we DO get the strong damaging winds as forecast and numerous power outages it would not be a good combination.

Let’s hope it misses us.

Here is the written up date that Kyle has mentioned. “…Midwest/Great Lakes… A consequential potential for impactful storms exists today into tonight across the region, potentially including long-lived/intense MCS development, owing to a high degree of moisture and extreme potential instability. However, short-term uncertainty remains high regarding spatial details exists owing to a strong capping inversion, along with guidance variability in terms of timing/spatial differences. Multiple MCVs, albeit generally weakening, are still readily apparent at late morning across portions of Iowa/southern Minnesota into western Wisconsin. Regional WSR-88D VWP data features notably enhanced mid-level winds, particularly by mid-June standards, within this… Read more »

Latest latest update from the SPC has not changed much. They did move the Sig-Wind Hatched area a little further north to include all of Muskegon, Kent, and Ionia Counties and points south. There are not ruling out a possible upgrade to Moderate Risk pending convective trends upstream. So far nothing to impressive out there at the current time. I guess its a “watch and wait” to see how everything evolves. Here is part of the discussion: Where storms do regionally develop, large hail and damaging winds can be expected, along with at least some potential for tornadoes with surface-based… Read more »

For what it is worth there is a 80% chance of a watch for areas to our south and south west. And for our area there is now a 70% chance of thunderstorms. We will have to see how all this plays out.
Slim

Update from NWS GR: The potential for impactful weather from late afternoon into early tonight continues to increase. SPC has increased our threat to “Enhanced”, with the greatest threat being damaging winds, large hail is the second greatest threat, isolated QLCS tornadoes are also possible. As for timing, since the storms are already over MN and will soon be moving into western WI shortly, we are thinking the storms will reach mid Lake Michigan by mid to late afternoon, moving on shore during the late afternoon into this evening. The area of greatest threat is mostly near and south of… Read more »

At the current time there is some very impressive lightning in the storms to our west. Will keep a eye on those storms as they move closer to us. At the current time the storms are moving to the NE if they continued on that track they would move to the north of the Grand Rapids area.
http://www.lightningmaps.org/?lang=en#m=oss;t=3;s=0;o=0;b=;ts=0;y=42.6852;x=-88.3589;z=6;d=2;dl=2;dc=0;
Slim

That line will eventually drope southeast.
All the modles showing that …INDY

“The thunderstorms should be entering the west side of Lower Michigan sometime between 4 p.m. and 7 p.m. We are not sure down to the hour just yet. We will know that in the early afternoon. It would then take about three hours for the storms to track across southern Lower Michigan.”

“Spotter activation will be likely this afternoon and evening for
southern areas.”

I’ll be out storm spotting today. I love being out getting reports and communicating with the weather office. I enjoy being in the field to try and get reports and video to keep people safe. I don’t do it for the money.

Good luck and be safe!

A broad upper ridge remains over the southern US today, with the primary band of westerlies extending from the Dakotas eastward into the Great Lakes region. Early morning model guidance suggests a shortwave trough and associated 40-50 knot midlevel speed max is currently over IA. Scattered thunderstorms have been occurring in vicinity of this feature, along with a couple of MCVs noted in radar imagery. Ahead of this shortwave trough, a warm front is lifting northward across IA/IL/IN/OH. Dewpoints in the 70s and strong heating to the south of the front will yield high CAPE values of 3000-4000 J/kg later… Read more »

Interesting that the SPC did an update at 8:24 am.

Looks like the table may be set for some big storms this afternoon. Of course it’s a watch and wait kind of thing. I see the upgrade to Enhanced with the 30% hatched from about Grand Haven to Lansing south. Another update will come at 12:30 so we will see if there are any changes.

I’ll be in East Lansing today, so any reports I provide are from there.
The afternoon discussion will be interesting to read. But regardless, it is sunny, warm, and a bit humid atm (not too muggy yet though)

Slim definitely the 1pm up date we will be in a enhanced area for all of lower Michigan I have been tracking these storms all night they are putting out Tornadoe warnings very late last night and now thunderstorm warnings in Minnesota at 8am its heading east for Michigan get a safe plan now major power outrages coming….INDY

The official H/L yesterday at Grand Rapids was 80/59 there was no rain fall and the day had 83% of possible sunshine. All in all a very nice mid June day. The overnight low here was 60 and at the current time it is 65 with clear skies. For today the average H/L is 79/58 the record high of 95 was set way back in 1894 in more recent times a high of 94 was recorded in 1956. With the expected heat for the next two days the record high for Tuesday is 96 and for Wednesday it is 97.… Read more »

Excessive heat watch for the SW corner of the state. Looks like half of the US is under some heat-related advisory/warning.

I see the SPC moved the slight risk area a bit farther north. From the marine section of the forecast discussion:

They will also have the potential to
produce meteotsunamis and or a seiche depending on how fast it moves, and what type of pressure changes there are with the line.

I was kind of surprised that there was no enhanced or moderate risk areas. Based on the local discussion I thought that would be a good possibility. Maybe there will be on the update?
Slim

This morning, Blake Harms said that the models were still all over the place.