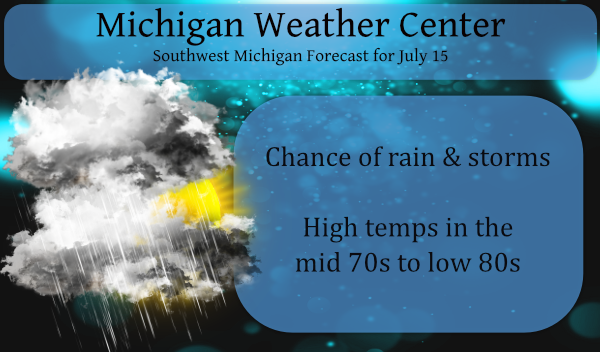 A side note to begin the post today we shout out  “we are debt-free!” having paid off our mortgage yesterday.  This is a great feeling after living fairly frugally since all the kids have moved away and have had children of their own.  We have 12 grandkids the oldest being 18 and the youngest two years old.  We have only bought used cars which we could pay off quickly and pay off the credit card monthly.  So, for you younger people out there make sure you contribute to a 401k or other retirement investment so you can have a comfortable retirement.  I took an early retirement three years ago so I can enjoy it.

We have a warm 74° this morning (at 6 am).  We had no rain overnight here in Otsego.  This is the convective outlook summary from the SPC for today:

Showers and thunderstorms are likely today, mainly before 3 pm. Mostly cloudy and breezy, with a west wind of 10 to 20 mph, with gusts as high as 30 mph. The chance of precipitation is 70%. New rainfall amounts of less than a tenth of an inch, except higher amounts possible in thunderstorms.

Hey Slim is this supposed to be the hottest times of the year In west Michigan?? INDY

Another well below average July day who knew ??? Currently 69* only in my area under more clouds boy this summer has been a cloudy one lot cloudyer then last summer at this point …Keep it coming …INDY

Below average high temps but above average overnight lows. Bigger story as MV and others have pointed out has been the humidity this Summer. Dew points have a lot more to do with how the air feels than temps do. Current dew point once again over 70 making it feel thick and gross yet again.

And the low for the day was 70 degrees, well above the average low. Sorry. Maybe next month?

wow, is that getting worse???
Slim

Why would someone want to hack a weather site? Seems there’s bigger fish to go after with other sites. Odd.

Wow look what lake Michigan did to our storms yesterday and overnight killed them I’m giving up on Thunderstorms bring on winter storms way more fun to track loving these low 80’s coming up for next week as we get to the end of July as of now no heat waves to even speak of such a easy Summer on going in the heat department who would of thought??? INDY

MV or Slim care to comment on how our NWS can be soooo precise in forecasting tomorrow’s weather, where we appear to have a 1 hour window where a thunderstorm will NOT be possible?

I have noticed that in the NWS forecast as well. I am not sure how accurate that forecast will be in the long run. It must come off the computer models that they are using. I know that the TV and private weather services have had hourly forecast for some time but they miss the mark many times. On a side note I will give a hats off to the NWS on yesterdays forecast. As the rains to our west did indeed dissipate before getting here last night. In looking at the radar yesterday I was concerned if that would… Read more »

Thanks for the info. 🙂
I emailed them yesterday, but I don’t expect a response.
Bernie

Yesterday was one of those kind of rare days when the mean for the day was “average” The overnight low here at my house was a warm 75 it must have been cloudy all night long but there was no rain here. There was some lightning to the north and northeast last night but it was off in the distance. As I have stated before there has not been much thunderstorm activity here in the NW side of GR. At this time it is cloudy and 76 here.
Slim

Congrats on have your mortgage paid off. I have had my paid off now for several years.
Slim

Congrats MV, that’s fantastic! Our kids are in high school and we have a long way to go, but I can’t wait for that day.