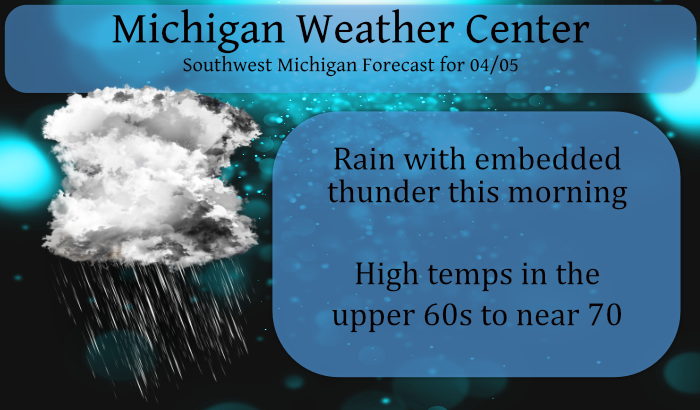 We reached 73.2° yesterday with mostly sunny skies.  Our low at 5:30 this morning is 51.8° with clouds overhead.  We have rain moving into Muskegon and I see from my radar (Radarscope) there is some lightning embedded.  There are showers and storms across the lake from Janesville Wisconsin down to Chicago.  Still waiting to see if there is more development to come.

The showers and storms may become fairly widespread towards daybreak today and at least continue through the morning in SW Michigan. Locally heavy rainfall over an inch is possible in spots where training may set up. Severe weather is not expected, but a few rumbles of thunder are.

A couple of flashes, a bit of distant thunder, and just enough rain to wet the road. A week or more of rain on the way…yay?

Now that we are well into Spring I can finally say our thunderstorm drought is over I believe the last time we had a good. Thunderstorm.was over 6 months ago crazy …INDY

So far today I have recorded 0.33″ of rain fall and the grass has sure became green and it looks like grass cutting time will soon start. At this time it is cloudy and 52 here.
Slim

If the forecast plays out that would be rather unusual and it could set up the issue of fruit crop damage if it gets cold later in the month. In 2000 there were highs of 78 on March 31 and then 82 and 83 on April 1st and 2nd then highs in the upper 60’s and low 70’s for the next 5 days. Then there was a low of 29 on April 10th then in May there were lows of 31 on two nights. Not sure if that caused any crop damage.
Slim

Not too worried. Farmers will get bailed out by the government if any significant crop is lost. But I wouldn’t go planting any super sensitive plants quite yet.

This is probably great weather for the plants. It will be interesting to watch the “green up” this week. I believe last year it took until at least mid-May for things to really green up.

You’re right. Grass, air temperatures, and water temperatures all seem to be almost a month ahead of average.

There are now flashes of lightning and rumbles of thunder here. So far just 0.03″ of rain and the current temperature is 51 and that is the overnight low so far. Yesterdays official high of 71 at Grand Rapids was the 7th warmest for any April 4th there was a new record set at Muskegon with a high of 73 the old high was 72 set in 1942. The high of 72 at Kalamazoo was the 4th warmest for the date and the high of 74 at Holland was the 3rd warmest for the date. The record for today at… Read more »

Some pretty heavy thunderstorms with hail came through my area in northern Kent around 7:30 this morning! Been a fun morning!

Some lightning and thunder here but no hail and not real heavy rain either.
Slim

Middle to upper 70’s this week with thunderstorms? Is it summer already? I love it!

Warm but NOT summer just yet. One thing it keep a eye on is that plants get too far ahead of where they should be and then have a frost in late April or early to mid May.
Slim

20 degrees above average?? You don’t see that very often.