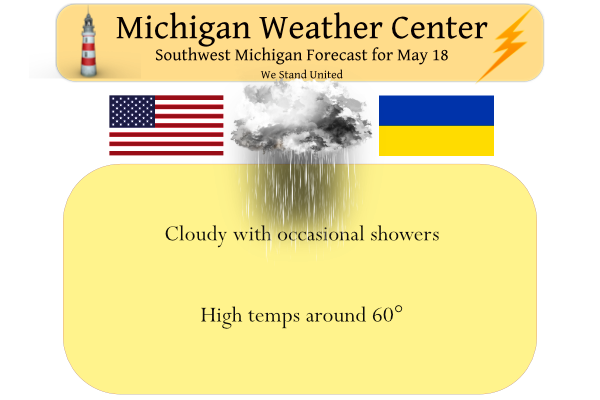 We have a few light rain showers moving through this morning and that will be the theme for today.  Clouds and possibly some drizzle could linger tonight.  Rainfall totals could be a quarter to half an inch through tonight.   The sun will return on Thursday leading to a warming trend. Warm conditions are predicted for Friday with some stronger storms possible.

Our high temp for yesterday was 67° and the low was 44° with mostly sunny skies.

1855: A tornado destroys at least one building as it moves from Jackson to Washtenaw County.

1997: Record low temperatures are set at Grand Rapids and Muskegon with both falling to 29 degrees. This will go in the record books as the coldest May on record at Grand Rapids.

1962: An early-season heatwave sends temperatures into the upper 80s and lower 90s across Lower Michigan. Record highs on this date include the 91 at Grand Rapids, 89 at Lansing and 88 at Muskegon.

1915: Lansing records their latest measurable snow on record with 0.4 inches, and Grand Rapids also does, with 0.2 inches there.

1923: A tornado injured two people in Kent County as it moved through rural areas from east of Coopersville to near Sparta.

2002: Snowflakes fly across Lower Michigan as record cold weather prevails. Record lows include the 26 degrees at Lansing, 29 at Muskegon and 30 at Grand Rapids. The freezing temperatures cause heavy losses to orchards across western Lower Michigan.

1975: A tornado injured one person as it destroyed two mobile homes at Byron Center in Kent County.

1977: The last half of May is unusually warm. Record high temperatures in the upper 80s and lower 90s are set across Lower Michigan from the 16th to the 28th. This helps make it the warmest May on record at Grand Rapids.

2001: A swarm of at least 20 tornadoes descends on Lower Michigan. Fortunately, most of the tornadoes are relatively weak and only five people were injured. Damage included dozens of trees downed, barns were blown over and roof and siding damage to several homes. Three homes and a golf course were heavily damaged north of Hartland in Livingston County.

Also on May 15, 2007, there were 40 severe wind and hail reports across Southeast Michigan including tennis ball size hail in Bad Axe and a measured 74 mph wind gust in Howell.

On May 18, 1962, the temperature rose to 93 degrees in Detroit, which is the record high for the day. This marked the fifth day in a row (May 14-18) that record daily highs were set in Detroit!

On May 19, 2020, after several days of heavy rainfall beginning on the 17th, the Edenville Dam in Midland County failed and prompted the issuance of rare Flash Flood Emergencies for areas downstream. 7 to 8 inches of rain had fallen over the Tittabawassee River basin to the north, estimated to be a 200-year flood event. The dam failure caused the Sanford Dam downstream to fail as well, sending a wave of floodwater toward the city of Midland. Approximately 10,000 people were evacuated and the Tittabawassee River crested at a record 35.05 feet in Midland. This historic flooding caused extensive damage around downtown Midland and the village of Sanford, though thankfully no injuries or deaths were reported.

On May 20, 1996, lightning within a thunderstorm that went through Richfield Township at 2:53 pm caused one injury.

Also on May 21, 2001, an F2 tornado hit Hartland and dissipated near Fenton. Other weak tornadoes hit Oakland, Lapeer, Shiawassee, and Saginaw Counties.

Get ready for more lousy weather!

Get ready for the pending cold snap! It starts Saturday and lasts for multiple days! Very cold nights are in your future!

From this afternoon’s Forecast Discussion regarding Friday:

“As it stands now, the primary threat area in our CWA looks to be south of a Muskegon to Mount Pleasant line, but we are not ruling out any area just yet. I-96 and south in the afternoon and evening will likely be the target area. Confidence will increase over the next 24 hours as the event comes more into the CAM window.”

Parts of Lower Michigan might hit 90+ again on Friday! Today’s CPC also trending back to above average temps. I love it!

Looks to have mostly ended. Here at my house I recorded 0.25″ of total rain fall. At this time it is cloudy and a damp 54.
Slim

Looks like the rain is done already. I guess a couple tenths is better than zero tenths.

Sadly, a cold, “throw away” year is on tap. Accidental “warming” now and then, with an immediate reversion to cold. Oh well, maybe next year.

Rain is falling and the current temperature is 52 in the area.
Slim

We are fast approaching two of the best months of the year, June and July! I love summertime in West Mi, everything from going to the beaches, grilling out, big thunderstorms rolling through, Cant beat it! What is your favorite beach in West Michigan? I’ve got tons of beaches I like its hard to pick a favorite. The most common place we go is Holland State Park beach but Mountain Beach near Port Sheldon is a little hidden gem that sits off the beaten path on a dead end road. Also, if you are looking for nice walking trails through… Read more »

I also love August… especially the first half with the Perseids and the mid/late summer feel. But I have to agree that June and July are slightly better with the longer daylight. All 3 months are good for severe storms in MI.
Also I need to go to the beach more often this summer… I’ll probably try exporing a few different ones and see which is best.

I really like the weather in Michigan from now (mid late May) to late September early October. Here in Michigan the weather in that time is nice for the most part we have mild to warm and yes sometimes hot days. After starting in October there is little sunshine and of course it gets colder and colder and than there is the snow. From November/December until April that is when Florida has great weather but for some reason I just stay here.
Slim

Hope we get more rain than the few spits and sprinkles so far. Farmers tilled and planted our field yesterday and it was a dust bowl, couldn’t even see the tractors with all the dust being kicked up. Incredibly dry after all the sun and heat the past couple weeks. We are now at less than 50% of our average May rainfall.

Yes I make deliveries across Allegan County and driving the dirt roads is a big time dust bowl. Good thing we are getting some needed rain.

It sounds like a good time to review the facts!
1. 2022 is well below normal for temps!
2. The first week of May was below normal!
3. Today will be wet and well below normal!
4. This weekend will be cold and the low temps may dip into the 30’s! Incredible cold!
5. The overall pattern is still trending with below normal temps!
6. Winter is by far the best season in West MI!
7. Rock n roll will never die!
8. The Detroit Lions are the worst pro sports franchise ever!
9. Mv’s blog rocks!

10. 2021 tied for the sixth hottest year on record, globally. All of the seven hottest years on record have happened in the last seven years.

The earth appears to be getting hotter.

No doubt about global warming, yet one political party is in total denial and won’t do a dam thing to help!

The official H/L at Grand Rapids yesterday was 67/46. With a departure of -3.1 that brought a end to the 8 days in a row of above average days at Grand Rapids. The overnight low both here at my house and at GRR was 45. When the clouds moved in it did warm up it 50 and with the rain now started it is at 49. So far here at my house I have recorded 0.06″ of rain fall. It still looks like a brief warm up on Friday with some storm chances and then down to below average for… Read more »

It’s going to be ten degrees below average today. It’s been nearly 20 degrees above average lately. My point is that it will feel chilly today.

We received some rain over the weekend but my lawn could use some more. My lawn is perfect right now and I just don’t want to use the irrigation system yet.

I work out side and even yesterday it felt cool later in the day.
Slim