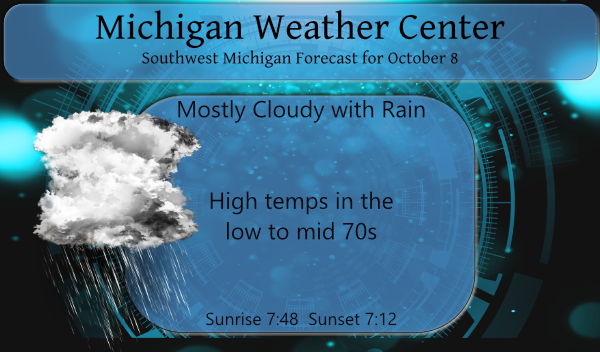 We didn’t get a huge amount of rain yesterday – .19 of an inch in Otego here at the Station.  There is more moving into the area this morning moving from south to north.  Guesses are a quarter to half an inch for today.

Though it is not unheard of we have high temps predicted near 80° coming!

Yesterday’s high temp was 72° and the low was 63° though it was mostly cloudy we did see a few peeks of the sun in the late afternoon.  Our rainfall total for the month is .94 of an inch as of yesterday.

Michael in the photo of the Mac Bridge on the left side near the bottom of the photo it shows a group of people standing there. Why? No on is ever there. Just curious. I have looked for info but no luck. Thanks. Sandy

According to News 8 we got 2.5″ of rain today in Hudsonville area.

We are sure getting alot of thunder here. Not seeing the lightning but it has to be nearby.

Getting a nice light show over this way.

Rain staying E and W of us…just not swinging through here. Keeping on the outdoor stuff 😉

As I was driving home this afternoon from taking hubby to pt I could see the dark clouds approaching. We got home and I ran the dog outside and the clouds opened up with the biggest downpour. lol!! It is like a river behind us from the rain running down the hill. I was out looking for a rainbow but none yet. I can feel cooler air coming in.

Hoping we’ll be able to handle “the transition” into the inevitable.

Just another double digit above average day to add to the streak. Nearly 20 degrees above average for our overnight low. We did get a little rain today, a whopping 0.09”. Rain has been hard to come by the past couple months, even more so to the West of us.

I wish I could send some your way. It is soggy here. The grass is as green and lush here now as it has been all year. I’ve been mowing every three days lately and I’ve had to time my mows in between the rainfall.

The rain has now ended and the rain gauge reads 0.67″ the sun came out for a few minutes. The current temperature here is 67 with cloudy skies.
Slim

The sun has been out for almost an hour here – wondering if it will
breed a few storms this afternoon.

More rain! Our wet Fall continues! Keep the warm temps around all month and then start the transition to a record breaking winter for snow! Bring it!

Most but not all of the highest snow fall winters at Grand Rapids had October’s that were warmer than average. But note there have been warm Octobers with little snow fall in the winter as well.
Slim

Through the first week of October, the average temp was 65.2. This is 2 degrees warmer than the average monthly temp of September! When all is said is done, it will be as if 2 extra weeks were added on between August and September this year. I love it!

It is nice to have the windows open at 8am on Oct 8th. Birds are chirping like crazy right now. Feels and sounds like spring.

In a way it kind of feels and smells like winter is south Florida.
Slim

Yet another warm (for October) overnight low the official overnight low at Grand Rapids was just 65 if it don’t fall below that before midnight this will be the 2nd warmest low for any October 8 at Grand Rapids. That is after yesterdays official low of 62 was the 3rd warmest low for any October 7th If Grand Rapids reaches 80 on Sunday that would be the 5th warmest high for that date. At this time it is cloudy and 65 here at my house.
Slim

I have been splitting and moving flowers around, so this rain is much appreciated!! Hopefully next year we will have a flower garden.
MV I thought about how you said you have beautiful flowers that you and wife tend too. What are some.of your favorites?

I do love the roses, other than that they all look nice, my wife does a great job tending to the multiple flower gardens around the house…