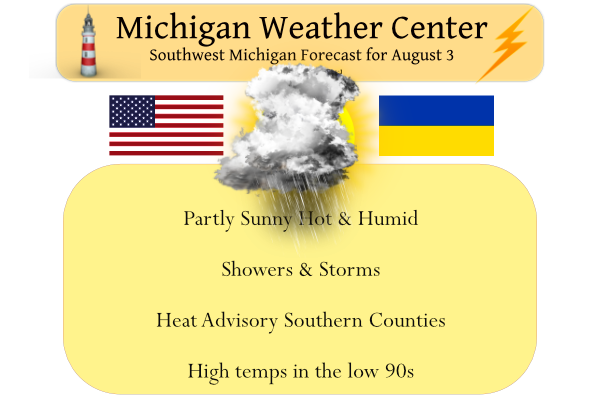 This is going to be one of those days when it may be better to be indoors rather than out.  Temps have only dropped to 71° this morning.  Yesterday we reached 83° after a low of 62°.  There is a fairly good chance of widespread rain today with some storms.  The main concern will be the wind and torrential rainfall which could cause localized flooding. Tornado chances are 2% within 25 miles of any one location and hail chances are 5%.  Heat and humidity will also be a concern, especially in the southern tiers of the state.

We have a heat advisory going into effect at 1 pm lasting until 6 pm this evening for Allegan-Barry-Eaton-Ingham-Van Buren-Kalamazoo-Calhoun-Jackson Counties.  With temps in the low 90s and dewpoints in the low to mid-70s, we will have feels like temps around 105°.

Thunderstorms will be on the increase today and some of them could be severe. Torrential downpours and frequent lightning will accompany the strongest storms. Local urban and poor drainage flooding could occur. Monitor conditions closely if you have outdoor plans today. It will be hot and increasingly muggy, especially south of a Holland to Lansing line.

What a summer, no heat waves in sight! Incredible!

If this was the hottest day of Summer wow .. Such a breeze I will say all ready its down to 78* degrees in my hood cold front must be through We have had decent rain on and off all afternoon with some thunder nothing to big .. Days are losing there touch fast now love it …INDY

Storm Chaser Brandon Copic reported a possible tornado that may have occurred in Jackson County near Parma.

Possible brief tornado damage 1 mi North of I-94 on Parma Rd near Parma, MI. Significant tree damage in the area including a healthy pine tree that was snapped 1/4 of the way up from its base. No structural damage, damage in confined location facing all directions
@NWSGrandRapids

This is the second time this summer we have wind damage near my house. We actually have a tree down on a house near me currently. The lightning was so loud and so close I’ve never heard thunder so loud. We have widespread power outages across West Mi right now.

Well today we’ve had rain pass us twice to the North, twice to the South, and more rain formed just East of us. Been seeing lightning and hearing thunder several times today all around and all we’ve managed is a few sprinkles to a trace of rain. Felt downright miserable today with a dew point up to 77 and heat index in the upper 90’s. Dog days of August are here.

It is raining in Zeeland right now. Go walk outside and check it out!

Yes, as I said a few sprinkles. Here’s a link to my PWS and as you can see we have a few hundredths of an inch on the day so far. Barely enough to make the ground wet.

If it is not raining, you must live in East Zeeland.

We actually live right between Zeeland and Hudsonville

.8 inches of rain so far and more rain is here as we speak! The high in GR looks to be under 90 degrees! Some heat wave? Wow!

Yep…Ada is dry…the party is to the South through Lansing. Enjoy 🙄

Temp has dropped to 72 degrees from 91 less than an hour ago – we have an unofficial .81 inches of rain in 20 minutes.

* At 349 PM EDT, severe thunderstorms were located along a line
extending from near South Haven to near St. Joseph, moving east at
45 mph.

I can hear thunder and the wind is starting to pick up. A ST warning was just issued for us.

Just hit here. Windy, but not that windy. Heavy rain and a little bit of hail bounced off our back deck. Very dark, as in street-lights-kicked-on dark.

Forecast Discussion Update Zone/corridor of convection which has been persisting from MKG/BIV to near GRR to Alma northward looks to have a connection with the convection back to the west that runs from the MKE area sw into the Ern Iowa. Strong H8 moisture transport related to 40 kt LLJ and axis of 2 inch+ PWATs has been supporting this activity and a few of the cells have had rather healthy rainfall rates exceeding 3 in/hr per MRMS. Suspect this zone (effective warm front) will fill in much better over the next few hours as shortwave near the Quad Cities… Read more »

1 inch hail threat for that severe storm near Hastings

There has been several rounds of storms/showers here today so far with several periods of heavy rain fall. That has held the temperature down here in the Grand Rapids area. At this time the rain has not reached Lansing yet and they are much warmer than GR. Of course this will just add to Mookie’s conspiracy theory. Now up to 0.48″ of rain here in MBY today. The temperature is now down to 76.
Slim

Been getting on and off rain here NW of Grand Rapids. The high so far today has been 84 but at this time it is 77 with a dew point of 73.
Slim

One good boom of Thunder in Ada, as the storm is leaving. I’d rate it a 7.9, and sadly it was our only one of the year. Ada Fire Dept just rolled out, so something quite close might have been hit. Small amount of rain. Hope everybody gets to hear some noise today.

I was just driving by the airport, extremely heavy rain and lightning strikes within half a second away. A bit lighter here in Forest Hills but still pretty decent. This has been one of the rainier summers that I remember

We are getting pummeled with rain as we speak! Incredible!

Possible severe weather today but with this mornings rain we will see what happens hopefully the sun comes out and fires some good engery later probably all east again of GR.. Yes Rocky 90’s haven’t been big this Summer sofar thats fine and dandy with me .. INDY

What a summer! No heat waves and plenty of sun! Wow, just wow!

Just had a short but heavy shower come thru and here in MBY had a quick 0.04″ of rain fall. At the current time it is no longer raining here but is very dark off to the north with a current temperature of 74.
Slim

The official H/L at Grand Rapids yesterday was 84/62 there was no rain fall and the sun was out 92% of the time. The official overnight low at GR so for looks to be 70 that was at 1AM. Here at my house I had warmer low of 72. At the current time there is a on going shower here and 74.
Slim

Another Heat Advisory. The point forecast says we may receive upwards of 1.5″ of rain today. That would be welcomed. Still pretty dry in this area.

Will GR even hit 90 degrees today in or all week? Heat wave? Not! Hot summer? Not! Keep the normal temp summer rocking! Incredible!