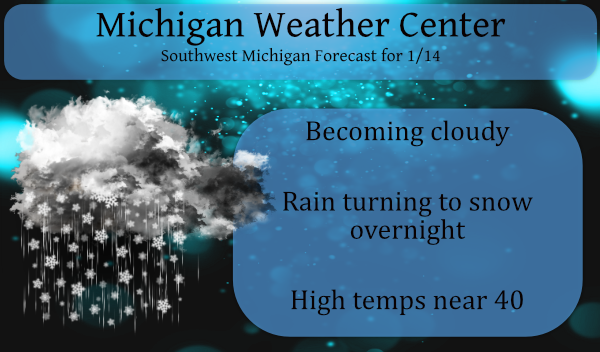 Some sun will be seen in spots this morning, otherwise, skies will trend towards cloudy through the course of the day in SW Michigan. Highs today around the 40-degree mark. Rain and snow will develop this evening changing over to all snow overnight. Accumulations tonight… trace amounts to around 2 inches. Lows tonight near 32.

As I said last week I was not overly excited with snowfall amounts for the end of the week into the weekend.  The true Arctic air is still propagating into  Eurasia rather than North America.  I am not sure we will see any severe cold outbreaks anytime soon or later for that matter.

Here you go Rocky you can have a foot of snowfall every day in your own yard!

Looks great and if we don’t get a few snowstorms in the next 2 months I may just buy that baby!

Boy, sunny, 43 degrees, and I found a dandelion open in the yard. Can it get any better than this for mid January/Winter?? Maybe a good thunderstorm?

I am heading up to SNOW country this weekend! It should be awesome ski conditions up there. They will be getting 2 to 4 inches of fresh snow in the next couple days! Incredible and fantastic! I have been able to ski and snowshoe on a regular basis all winter long! Who would have thought?

Poor Bill, he wishcasts for snow and cold almost as much as Rocky. You can just hear the dejection and hopelessness is this blog post.

Just 4 days ago, Bill wrote in his blog, “We’re still on track for significant accumulating snow on Friday.” And he showed a snow map that showed GR getting 5-6″ of snow tomorrow.

*poof* the snow has pretty much disappeared again!

Boy the NOAA map out west looks crazy… will the lake stop all that from getting to us?

With all the maps being posted lately, here’s the precip map posted by Bill today for the next week. Not much here! 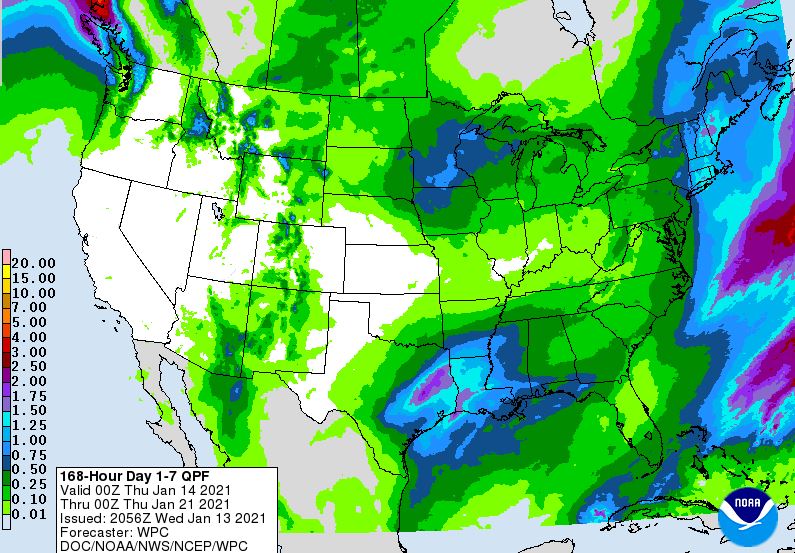 Some helpful driving advice for everyone 😀 I woke up this morning and noticed how warm it was. I even commented that the driveway had looked wet and I wondered if it had rained last night. I made the mistake of not checking the temp (it was just below freezing) and assuming that because the driveway was wet, that the roads would be wet too. Mistake! I was overconfident and driving the full speed limit on Burton when I hit a huge patch of black ice (which I thought for sure was water based on my previous assumptions) and lost… Read more »

Another item of note, we are fast approaching the 10 year anniversary of our last blizzard on groundhogs day 2011. Anyone remember when we sometimes used to get several blizzards each year? Now it’s getting hard just to remember “a” blizzard.

Mid point of met Winter today and what a historic snow drought we are in! With no upcoming cold air outbreaks and very little snow in the forecast, the drought looks to continue. Check out the complete lack of a “snow pack” on the Holland web cams:

Shoot, we have more snow here.

We are now 14 days into January 2021 and it is still mild with very little snow fall. The mean for the month is now at 29.8 and that is good for a departure of +5.0 and Grand Rapids remains at 2.2” of snow fall for the month. And for the season 7.5” Grand Rapids is now over 30” below average is the snow fall department. And even in norther Michigan reporting locations are now below average for total snow fall
https://www.weather.gov/apx/snow
At this time it is clear here with a temperature of 29.
Slim

Wow, those are some shockingly low totals for Northern Michigan!

La Nina’ is letting me down… I feel like that character Charley in Rudolph, from the land of misfit toys…
“I would cry, but I haven’t got any tears left”. :< (

41 out of the last 51 days have now been average to above average temps (including today).

Yesterday was a balmy +12 degrees above average.

“Overall, we are not impressed with any of the snow chances through the 7 day forecast.” NWS GRR

I love it! The snow drought continues.