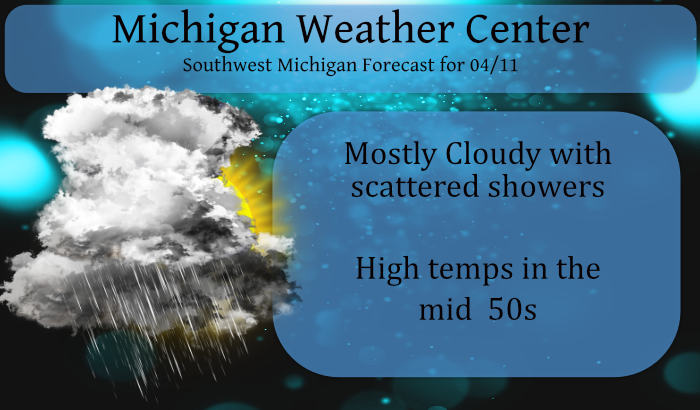 We have a meandering low-pressure system located near Chicago this morning which brought us a nice soaking rain yesterday and will bring us scattered showers throughout today though not as numerous as yesterday.  We had .55 of an inch yesterday and briefly reached 73° in Otsego.

We won’t see any 70° temps this week with the cooler air being pulled down from Canada – we will be lucky to get to 60° with temps predicted to be in the 50s which is closer to normal for this time of year.

There were some brief windy storms south of Otsego in the Alamo area which knocked out the power to nearly 4000 customers in NW Kalamazoo and NE Van Buren Counties.  Storms produced small hail in Cutlerville and East Grand Rapids. Wind gusts hit 48 mph in Battle Creek, 47 mph at Jackson, 46 mph at the Kalamazoo Airport, 43 mph at Lansing, 42 mph in Kent City, 41 mph in Allegan and 35 mph in Holland. There was a possible tornado in southern Kent county east of Eastern and just north of 100th St.  This has yet to be verified by the NWS though a storm spotter described it as the brief spinup tornado.

The grass and the weeds have really taken off with all this rain. We were outside pulling weeds in the flower garden today. The one thing I love about Spring is seeing all the new growth and flowers coming back. The birds were singing their hearts out today.

56* degrees outside feels great back to normal or below average for the rest of April?? That’s a winter I mean winner lol ….Who knew??? iNDY

Below normal temps as far as the eye can see! Who would have thought? Incredible!

0.85” of much needed rain yesterday here. Firing up the lawn mower today as the grass is unbelievably thick and lush already for early April. Mowing season seems to get longer every year. Hit 71 yesterday, yet another double digit way over average day.

I recorded 0.90″ of rain here yesterday and overnight. At this time it is cloudy and 51 here.
Slim