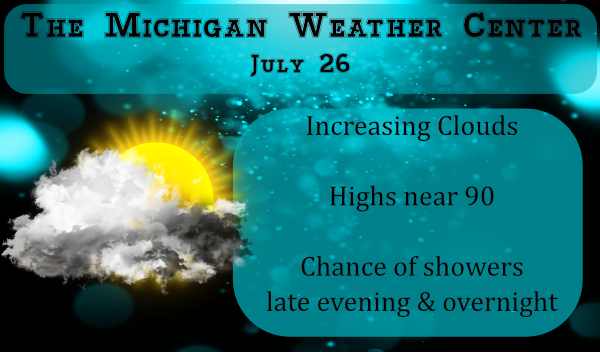 We have a moist and hot day in store for SW Michigan today which should be the last oppressive day we have for a while unless of course, you like the heat and humidity with indices near 100° this should be good news.

It is hard to believe we are closing out the last week of July already.  The adage of time flies faster the older one gets seems to be true as this summer has sprouted wings and has flown 2/3rds away towards fall.

We still have more than eight weeks left of warm weather unless we see a flip in the atmospheric currents and the Arctic stream invades the area which I don’t see happening anytime soon.

The days are getting shorter which I notice because I am generally up before the chickens and close my day after twilight in the summer.  You will really start to notice it in the upcoming month.

— Today the last oppressive day for a while — No changes to the previous forecast. Heat indices will reach the mid to upper 90s over most inland locations, but the oppressiveness will be offset somewhat by southwest winds in the 10 to 20 mph range.

— Showers and thunderstorms this evening into Monday — No changes to previous thinking. We will see showers and storms initially developing late this afternoon/early evening up towards US- 10 ahead of a slow moving cold front. This could be the area seeing the most rain overall, but amounts nonetheless should be highly variable. To illustrate, the ECMWF Ensemble (ECE) shows appreciable spread, with local amounts of 2+ inches well within the range of possibility according to some of the ensemble members. Rain potential spreads farther south and east overnight. However, some model guidance suggests this will gradually decrease in coverage as it does so and then fill in again by mid-morning Monday. This uptick could possibly be the result of both insolation and superposition with a jet entrance region aloft. Regardless of the exact details, likely PoPs areawide are still justified – although, as mentioned before, precipitation amounts could be quite variable. Looking upstream, we believe the 26/00Z MPX sounding provides a reasonably accurate preview of our future pre-frontal environment. Its characteristics of high PWAT, skinny CAPE, substantial warm cloud depth, etc. all support large rainfall rates. This limits the severe weather threat, but with the mentioned insolation and improving jet dynamics towards midday Monday, the SPC marginal threat for severe thunderstorms over our southeast forecast area is quite justified.

No news here…it came through dry. But!…the breeze, and the temp make for the rare perfect evening 😉

Hey Slim, any chance those storms over the lake hold together and make it here?

Just another 90+ degree day to add to the growing total and the heat index once again above 100. Boy this has been a HOT month! The humidity has been relentless for most of the month, dew point is at 74 today with some places in the state as high as 79.

It is very hot outside!! We have a slight breeze here.

Just got done mowing the lawn, whew brutal humidity out there!

The hottest official temperatures in Michigan yesterday were in the UP and northern lower Michigan the state high was 91 at Gwinn and Traverse City. It was 90 at Houghton, Iron Mountain, Marquette in the UP and Alpena in northern lower. Here at Grand Rapids the official high was 86. Here at my house I had a high of 89. The official overnight low at GRR was 70 here at my house I had a low of 68. The last reading at GRR was 72 and that is what I have here at the current time. I have a DP… Read more »