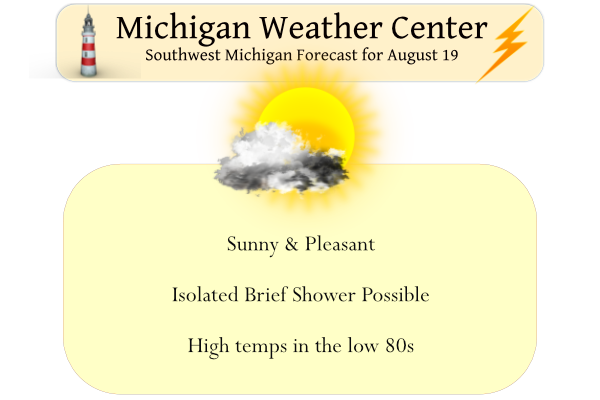 Our chance of showers increases over the weekend.

We are in the marginal risk area for late tomorrow into Sunday:

Get ready for more below normal temps and sun next week! What a summer! Wow!

Had a nice little shower move through this morning. Everyone have a great Friday!!!

Continuation of very the pleasant late summer weather. Yesterdays official H/L at Grand Rapids was 84/59. There was no rain fall and the sun was out 85% of the time. The overnight low here in MBY was 59 at the current time with clear skies it is 61 here. For today the record high of 98 was set in 1955 and the record low of 43 was in 1977. Today looks to continue the pleasant weather pattern but there are increasing chances of some rain (maybe heavy?) over the weekend.
Slim

A nice cool 58 currently with a mix of clouds and sun. I can see a rain shower off in the distance. Looks like some high rain chances again for this weekend. We have been spoiled this summer with nice weather so no complaints from me.