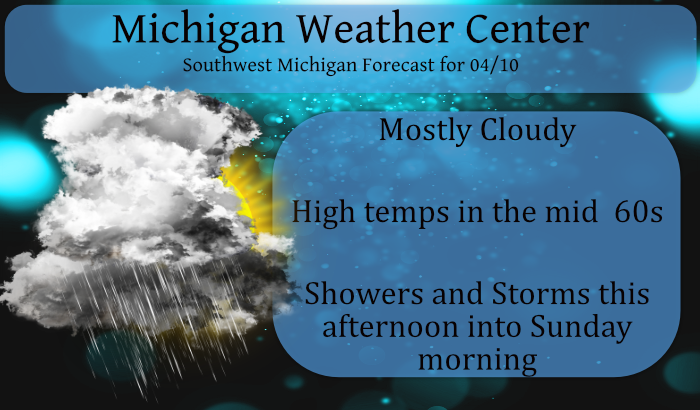 The spring of 1965 was cold and stormy. Three feet of snow fell in March at Grand Rapids, making it the snowiest on record. The temperature hit zero degrees on March 27th  Grand Rapids had 3.9” of snow fall on April 1st and there was 6” on the ground on the morning of April 2nd the low fell to ten degrees on April 3rd. This cold and snowy pattern in March is similar to other years that saw big April tornado outbreaks in Michigan. In 1956, 1967 and 1974, very cold weather prevailed into April, followed by a sudden warming. Then the tornadoes came through, soon followed by more cold weather. The brief warming that preceded the tornadoes was the result of strong southerly winds in advance of a strong low pressure center. The weather maps of April 10th and 11th 1965 show a low tracking from the Central Plains into southern Lower Michigan. In the “warm sector” ahead of the low, the temperature rose to 72 degrees at Grand Rapids that Sunday afternoon.

A line of powerful thunderstorms formed over Iowa during the afternoon then moved into Wisconsin and Illinois. The Severe Local Storm Warning Center of the U.S. Weather Bureau issued a tornado forecast at 1 pm for northern Illinois and parts of adjacent Iowa and Wisconsin. The term “watch” would be used instead of “forecast” for severe weather outlooks after this historic event. Several of the thunderstorms spawned tornadoes, including one that killed three people in southern Wisconsin.

The storms continued east, crossed Lake Michigan and moved from Illinois into Indiana. By 6 pm, two more tornado forecasts were issued, covering the northern half of Indiana and Ohio and the southern half of Lower Michigan. The Michigan forecast offices, including Grand Rapids, were aware of the destruction that had already occurred further west, and began issuing weather bulletins describing the progress of the thunderstorms they were watching on radar.

The first bulletin was issued at 5:20 PM There was no mention of tornadoes in this statement. At the time, the Weather Bureau thought the word “tornado” would cause panic and did not issue a warning until tornadoes were confirmed. The squall line began to intensify as it moved east and word was received that the storms had brought tornadoes to Illinois. The next statement from Grand Rapids at 615 PM expressed how the threat had evolved.

The storms along the squall line moved east and brought tornadoes to Kalamazoo, Allegan and Ottawa Counties. One tornado moved northeast of Kalamazoo and injured 17 people. In Allegan County a tornado killed one person in Burnips. A severe storm intensified as it moved towards Allendale, where a tornado began its 35 mile rampage. It tracked south of Marne then inflicted heavy damage to Alpine Township, Comstock Park, and Rockford before ending near Cedar Springs. Five people were killed and over 100 injured. One of the injured would die days later, raising the death toll to six. Another tornado, probably from the same storm, hit Montcalm and Gratiot Counties, heavily damaging several farms. The Grand Rapids Weather Bureau issued this somber statement after the storms had moved out of West Michigan:

Even worse destruction and loss of life was concentrated further south, where two powerful tornadoes tracked from the Indiana border across Branch County all the way to Washtenaw County, within a mile or so of each other and less than an hour apart. A total of 44 people were killed along the 80 mile path and it was difficult to tell which tornado did what damage or claimed which victims. People that had been hit by the first tornado had to take cover to avoid the second.

Always a good read with these storms Slim. Such different times.

We are now a remarkable +8.6 degrees above average for April after a very warm and sunny March. It doesn’t get much better than this!

Get ready for a long stretch of cool Spring weather! No 70’s in sight, even 60 degrees will be hard to reach! Who would have thought? Bring it!

Cool Spring weather? The average high temp for this time of year is only the mid 50’s. We’ve all gotten so used to month after month of way above average temps that some have forgotten what normal and average is.