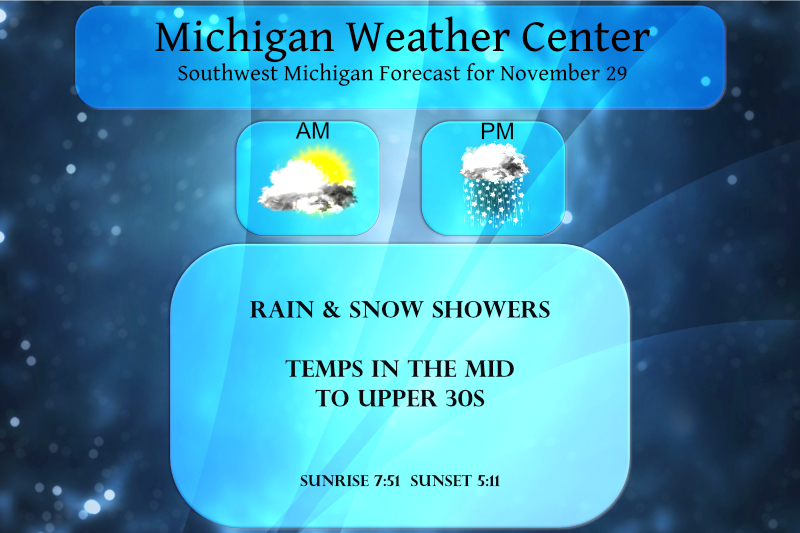 We saw some sun yesterday mainly in the morning before the lake effect kicked back in again.  The high was 37° and the low 28°.  This is like a heatwave compared to temps in Alaska which are in the negative territory and will remain so all week, -20° to -30° forecast for this week for highs.  Northern Canada is the same.  This cold air mass is forecast to stay where it is, just something to keep in mind as we get into December though there are no signs this is coming here any time soon.

We will see some sun early before the clouds move back in today bringing in a mixed bag of precip.  Some areas could see another 1 to 2 inches of snow.  Any snow we get will melt off by mid-week as temps warm into the 40s.

We have been getting absolutely hammered with snow for hours! Probably at least 2 inches already! Incredible!

Snowing heavily out in my hood love it …InDY

Looks like GR is up to 6.2 inches for the season so far. Depending on how much we get from this WWA we may end up just above/below average for the month. I think we average around 8 inches for November.

We are a lock to end up with above average snowfall for the month of November! Mark it down and take it to the bank!

We saw this coming at the beginning of the month ….Below average temperatures and above average snowfall incredible is right….InDY

Rock n Roll will never die! It could be a winter to remember!

Mookie and Andy are golfing and Barry has his AC running on full blast!

A WWA was just issued! This is the third WWA so far and only November! How incredible is that? This could be a winter to remember! Bring it!

Compared to last year we have had 15 times more snow so far! Great start!

The snow maps and starting to show consistent snow in the long range! Who wouldn’t want snow in December?

There was a trace of new snow fall here yesterday but with highs here in the mid 30 some of the snow on the ground melted and there is just one inch on the ground here this AM. There was some clearing overnight and the low dropped to 19 here the official low at GRR was 21. At this time it is 24 here with broken clouds.
Slim

Great start to winter! November = above normal snowfall and below normal temps! How is that possible when the warm weather fanatics keep saying warm and not snowy, just like last year? Incredible delusion!