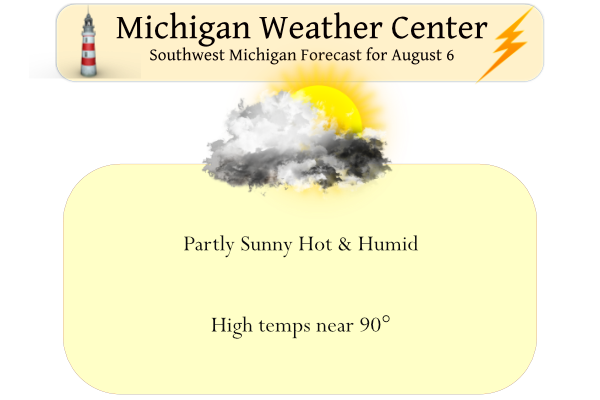 We are in Milwaukee this weekend. We took the Badger ferry Friday morning. It was clear and 60 when we were in Ludington. There were clouds over the lake and the trip across was smooth but it was cloudy all the way across. And it was still cloudy in Manitowoc. The temperature was 71 in Manitowoc. We bought gas in Manitowoc for 3.69 a gallon. It cleared up by the time we got to Milwaukee and the temperature was up to 85. At the current time it is clear and 74 with a DP of 71.

I have toss up some information on the Perseid Meteor shower that happens in the next week. If the sky is clear this would be a good time to see if you can see a meteor.  When I was younger it would one of the summer events that I would stay up for sometimes all night long.

The predicted peak for this year is on August 13th In most years, we would recommend you to watch the Perseids’ peak on the mornings of August 11, 12 and 13. Unfortunately, the moon will be up all night during the peak of 2022’s Perseid meteor shower. However, note that this shower tends to rise to a peak gradually, and then fall off rapidly after the peak. That means you can watch for Perseid meteors in the week or 10 days before the peak. You won’t see as many meteor as you would in a dark, moon-free sky at the peak. But, in 2022, we don’t have a moon-free sky at the peak. Also note that the Perseids strengthen in number as late night deepens into the wee hours of the morning. The shower is often best before dawn. So, in 2022, we recommend you start watching in early August, from late evening to dawn. Watch on multiple mornings, until the waxing moon – brighter each night, and up for more hours – drives you back inside.

Latest Forecast Discussion: Main focus is the heavy rain potential through Monday as an area of PWATS over 2 inches pools ahead/along an approaching slow moving cold front. Unfortunately confidence remains quite low at this time as to if/when/where heavy rain amounts may set up since guidance/CAMs still not in good agreement. Certainly an ideal environment/synoptic pattern be present; the specifics just arent very clear. Currently the air mass over MI is rather dry so any remnant upstream activity should tend to dry up as it heads our way tonight. Pops ramp up in the Ludington area however late tonight/early… Read more »

Get ready for the cold front! Next week will be near to below temps again! What a summer!

It’s yucky out. 90 degrees with a heat index just shy of 100. Borderline heat advisory material. It’s our 18th 90-degree day of the season, I believe.

There’s been quite a few 90s over here east of GR. I lost track so I’m not sure where I’m at at my house. Very nice summer. Some hot days and some very comfortable days.

It has been a very nice summer for sure.

We currently have a steamy 83 degrees with a dp of 76. Yesterday we reached 85 degrees and the low was 68. Forecast Discussion: –Warm and humid weekend to start– Dry air aloft with high pressure over the region will allow for warm advection today. +18C at 850mb along with a +2 to 3 positive fin the NAEFS mean Temp anomalies is a good signal for above normal temperatures today. So expect low to mid-90s across the region. It will be fairly dry, so while it will be hot and at times oppressive it will not reach advisory criteria. —… Read more »

Only 10:30 in the morning and the heat index has already soared over 90 degrees. This has been a very steamy week, even the nights. Haven’t dropped below 70 degrees in quite a few days now.

It’s been three or four consecutive nights with 70+ lows. I feel for those without A/C.

I would much rather take the ferry to Wisconsin than drive. We drove to Milwaukee in January and the traffic in Chicago was absolutely horrendous! Add that with the tolls and it was a total joke!

I drove around lake Michigan a few years ago all the way through the U.P. and back. The worst was going through Gary and Chicago – not for the faint of heart.

The traffic seems to be ridiculous many hours of the day and you get racked by the toll fees. Definitely taking a different route to Wisconsin next time around.

As we head into September the near normal temp pattern is rocking!

First winter storm warning of the year up in the Brooks Range in Alaska. A sign of the direction we are slowing Turing towards. Probably be a few months before that gets here but a sign of the times.

I’m ready for a true “blizzard” one of these winters. been 11 years since our last one.

I am with you and a blizzard would be incredible’

Milwaukee will be hosting the 2024 Republican nomination convention im going counting the days so excited…. Just like the cool weather coming next week tenps in the 70’s yeahhhhh …. INDY

I love it – accuweather is talking winter storms already! Hopefully a sign of things to come! Bring it on!

We rode the Badger almost 30 years ago on our honeymoon. The morning we went in late September Lake Michigan was flat like a sheet of glass almost the entire way across, the only waves or ripples were from the ferry. Never seen the lake that flat and haven’t since, yet somehow my wife still got seasick going across.

Fall is looking like normal temps, so keep the string of near normal temps rocking! Rock n roll will never die!

How long did it take to get across the lake on the Badger?

it took 4 hours. Played bingo I won one game and won a new hat.
Slim

We will ride the Badger eventually. At least, I hope so.