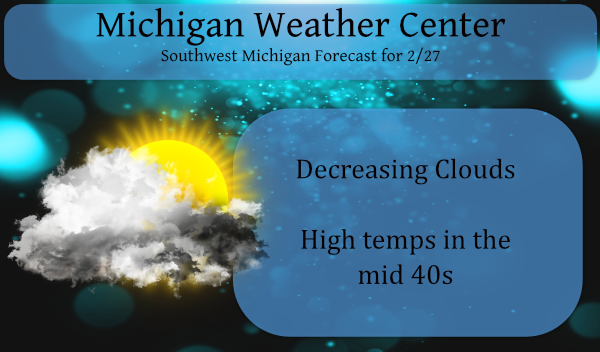 On Monday we will flip the calendar to March and the start of meteorological spring. While some like the snow and cold of winter I like the warmth of late spring and summer. That is by far my favorite time of the year.  During March we start out with 11 hours and 14 minutes between sun rise and sunset and end March with 12 hours and 42 minutes and by the end of May we are at 15 hours and 7 minutes. Grand Rapids starts out with a average H/L of 38/23 on March 1st and ends March with 51/32 and by the end of May we are at 74/53. We also go from snow on the ground to brown ground to lush green between March 1st and May 31st.

So now it will soon be time to see how March and spring of 2021 will play out. I for one hope we have a mild spring with some thunderstorms but no storms that a lot of damage or hurt or kill anyone. One thing we will have to keep a eye on is that we can get through March without any ice storms and then the rest of spring without any killing frost. And as I said no storms that causes injuries or worse.

My car thermometer says 50 degrees. Just saw a dude in a convertible with the top down. I am enjoying the clear skies as of late.

It was 52 up here in Traverse Today!

I have to agree with you Slim, spring is probably my favorite time of year. I really enjoy the increasing daylight and temperatures and the approach of summer. Plus after a long winter (of which this was not… but every winter in Michigan seems long!) it is nice to get some sun. Side note: For December, January, February this year, I would say this was one of the easier winters. The past few weeks were exciting though with all the cold/snow, which we haven’t seen in a couple years. But I am definitely ready to turn the page to spring… Read more »

We picked up half an inch of snow overnight – currently 33.6 degrees