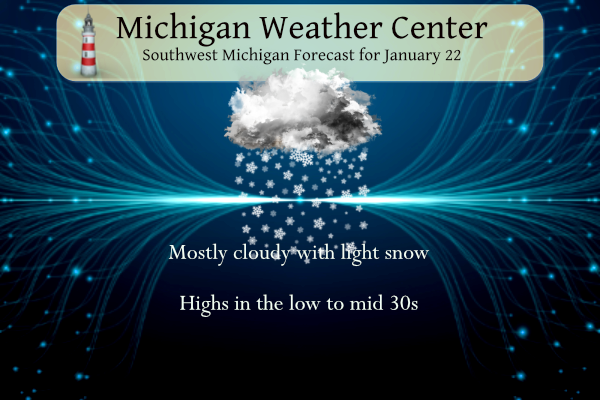 Light snow is forecast across parts of Lower Michigan from Sunday morning into the afternoon. Minor accumulation is expected (especially for January standards), and any travel-related impacts are likely to be limited. Most areas will see less than an inch of the white stuff.  A more significant system may move in for Wednesday.

A transition from La Niña to ENSO-neutral is anticipated during the February-April 2023 season. By the Northern Hemisphere spring (March-May 2023), the chance for ENSO-neutral is 82%. 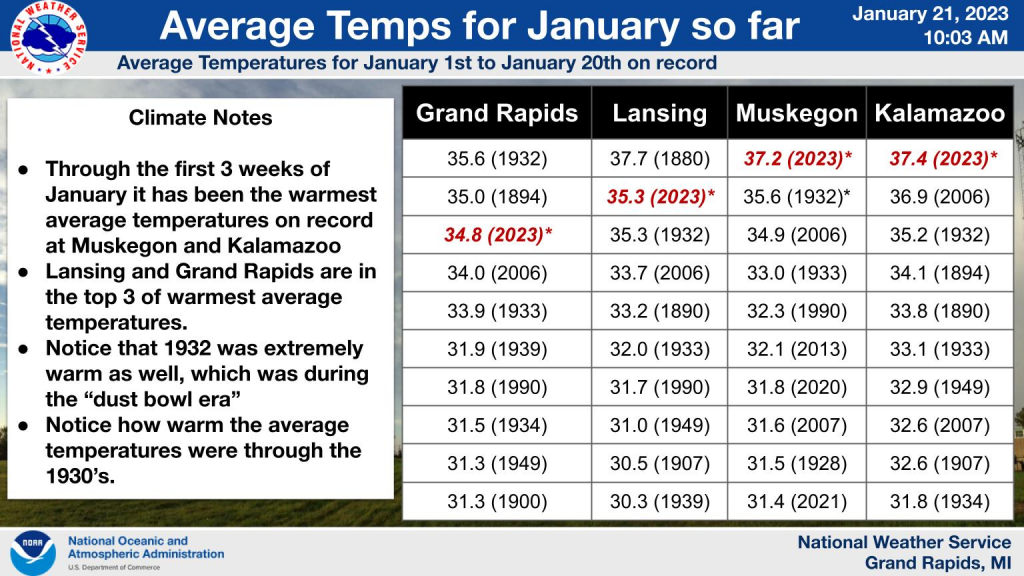 If you’ve thought that its been a warm January, you were right. Here are lists of the top 10 warmest average temperatures for the first 3 weeks of January on record. This is a record at Muskegon and Kalamazoo and in the top 3 for Lansing and Grand Rapids.

An upper-level system aided by some mid-level frontogenetical
forcing and a broader area of weaker lift will combine to bring
light snow today. Very light snow accumulations of mostly under an
inch are fcst for most of our area today. The exception to this
is over our far se fcst area where mid level fgen is briefly
favorable this morning.

Therefore I would not be surprised to see an isolated higher
amount near two inches near KJXN or wherever mesoscale mid level
fgen banding briefly sets up in that vicinity. This system will
have minimal impacts given the light snow amounts and sfc temps
which will moderate through the lower to middle 30s today.

A brief period of lake effect/lake enhanced light snow is expected
over our nw fcst area Monday night as an upper level shortwave
traverses across the northern Great Lakes region. Light snow
accumulations on the order of an inch or two are expected near to
northwest of Big Rapids.

Low pressure over the Arklatex region will move ne to near KBUF by
late Wednesday night as suggested by latest ecmwf ensembles. This
system will have ample gulf moisture to work with and has the
potential to bring a swath of significant snow se of our fcst area
Wednesday through Wednesday night.

Some lighter snow accumulations on the order of 1 to 4 inches
seem possible for our area with relatively highest amounts over
our southern fcst area. Will need to monitor this system closely
as a track further nw would bring potential for more significant
snow into our area. This is not the most likely outcome for our
area but still within the range of possibilities.

Maybe a WWA? The latest from NWS GR: — Accumulating snow still expected on Wednesday — While accumulating snow still looks to be a good bet on Wednesday, the heaviest swath of snow is still forecast to be southeast ofthe GRR forecast area. ECMWF ensemble mean snowfall along I-94looks to be in the 2-5 inch range with the heaviest amounts across Jackson County. The low in the ECMWF ensemble mean at its closest approach is over Central Ohio moving southeast of Cleveland. This is not a good track for our forecast area with most systems. The GFS ensemble mean surface… Read more »

1880 is the warmest January for Lansing but 1880 does not appear on the other lists. I’m guessing that’s because records for the other sites do not go back that far (?).

You are a bottomless pit of knowledge.

Snow has stopped here. Concrete and hard surfaces are clear. Most of what little we received has melted. My lawn is more green than white.

Up to an even 1” at my house. Snowing moderately

The roads are an ice rink here in Ionia County. Freeway traffic is being diverted off the Portland exit due to an incident on the freeway

Interesting about the transition to ENSO-neutral. It’ll be interesting to see how this impacts our spring weather

The transition has already begun slightly from a post from Bill on his blog. I would be interested to see what the weather was (temps, amount of storms/severe weather or spring snows etc) was when we transitioned to neutral in the past during the spring.

Impressive numbers in the above chart for warm January temps. A lot of those years were a long, long time ago.

For the first time this January my deck has a nice even layer of snow on it. The side roads are also snow covered this morning. Seeing some slower traffic speeds on the traffic map in parts of the area as well. Little snows like this can sometimes causes the biggest issues.

There is now light snow falling here in MBY and yes there is a trace now on the ground.
Slim

The official H/L at Grand Rapids yesterday was 32/30 there was a trace of snow fall and no sunshine. The overnight temperatures have held steady in the low 30’s and there is a very light trace of snow on the ground here in my yard at this time. For today the average H/L is 30/18 the record high of 56 was set in 1933 and the record low of -6 was in 1970 the record snow fall amount of 12.3 fell in 2005. There is a chance of some very light snow today that will not amount to much. And… Read more »

Good morning! We took a road trip up to Bay City yesterday. It was kind of odd going up there in late January and not seeing any snow. Well there was snow just not very much. There were a few parking lot snow piles. Some snow in the ditches on the side of the roads. And get this it did snow some in spots yesterday and up in Bay City there was a solid trace of snow on the ground. While there we took a ride by the Saginaw Bay and in the years that I lived in Bay City… Read more »